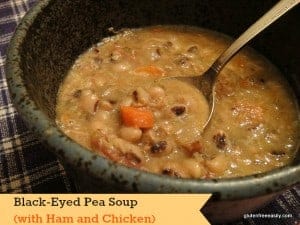 This recipe was adapted from Stephanie O’Dea's Black-Eyed Pea Soup over at A Year of Slow Cooking. If you'd like fewer servings or would like to use a smaller crockpot, don’t just halve this recipe. You’ll want the same amount of black-eyed peas, 2 cups of meat, 4 cups of broth, and about the same amount of seasonings. Be sure to take a look at Stephanie’s recipe, too, which serves 8.

Stephanie suggests adding Tabasco sauce to taste after you’ve ladled your soup into your bowl. We enjoyed it without, but if you like to add a little zip to your soup, that might be an option for you.

Any time, we want a little taste of hot at our house, we tend to add some Texas Pete hot sauce (bit of trivia--many of the peppers used in Texas Pete are grown locally) or Sriracha sauce.