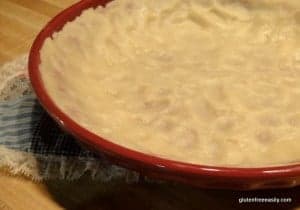 Folks this gluten-free Never-Fail No-Roll Press-In Pie Crust is the easy wonderful pie crust recipe you've been looking for. You won't believe it!

I have used many different combinations of flours successfully. There will be slight variations in flavor and texture with each. For example, when I used my Two-Ingredient Gluten-Free Flour Mix and ½ cup of almond flour (which, of course, made the recipes unsafe for those with nut issues), I thought the crust was a little more crumbly. However, it was still fine for us and I thought it tasted especially good.

I rarely use xanthan gum in this recipe, but it will make your crust bind a tad better and, therefore, a little less crumbly.

Sometimes the salt stands out in the flavor of the crust, but it provides a nice contrast to sweet fillings or a complementary one to savory fillings. If necessary, you can reduce the amount of salt a bit.

Be sure to check out the Pumpkin Pecan Pie recipe.

I don't recommend blind baking this crust (i.e., baking it without a filling).