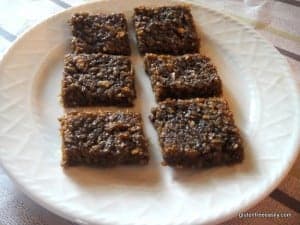 Adapted from Katie Kimball at Kitchen StewardshipPreparation - I used olive oil to grease my glass baking dish. Chocolate Chips - Katie’s original recipe called for ¼ cup chocolate chips. I didn’t have any, but they would probably work well in this variation even with the apples. Food Processing - Times may vary; I have a very old food processor so it takes longer than the new, improved ones. Sweeteners - Since even blackstrap molasses is considered refined, you can use either maple syrup or an agave nectar that you do not consider refined/processed. Maple syrup can also be used in place of the honey. The main thing here is to keep the amount of the liquid ingredients the same. You can use all honey or substitute your preferred ingredient for the total amount, but Katie says that if you remove the molasses then you’ll simply have to call them energy or protein bars. For those who eat molasses, Popeye bars sound like so much more fun, don’t they? Katie used a combination of molasses, maple syrup, and just a drizzle of honey for binding in her original recipe. My version has a stronger molasses taste, which I like, but if you don’t, you might want to vary your choice of sweetener amounts to be less molasses and more of the other(s). Spices - I forgot the cinnamon and nutmeg. While I didn’t feel the recipe was missing anything, I’m sure the cinnamon and nutmeg would add nice flavor. Storage - Although I originally kept these refrigerated as Katie advised, leaving them out didn’t cause a problem. I rather liked them better at room temperature. So storing in a lunch box until lunch time wouldn’t be a problem.