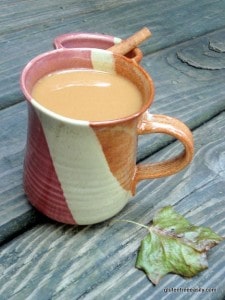 This recipe should be called Heaven in a Mug! It's a fabulous treat for Fall.

If you want a lighter version (in taste and color) of this latte, use the lesser amount of pumpkin puree. If you’re a pumpkin lover though, you’ll want to use the greater amount.

You can use my Pumpkin Butter instead of pumpkin puree for a richer version of this latte!

I measured my maple syrup by filling my ¼ cup measuring cup that I used to measure the Kahlua only half way; hence, the mention of both 2 tbsp and 1/8 cup. Taste your latte before heating to see if you would like to make any adjustments to amounts.

I used my special mug (from our local Dirty Bird Pottery) that my mother-in-law gave me for Christmas last year. It's a mug that has a place for your tea bag. Surprisingly, either a tea bag or a cinnamon stick will "sit" quite well in the "holder" until one really tips up the mug to get the very last drop of one's beverage.