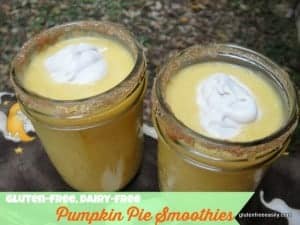 I absolutely love pumpkin pie, but I don't always want pie. This Pumpkin Pie Smoothie does the trick for me though! Top with Honey Cinnamon Whipped Cream for the ultimate treat.

This smoothie recipe was inspired by a recipe from the Mother Nature News Network. That recipe used pumpkin, evaporated milk, and yogurt only.

This smoothie recipe is more allergen-free and also packs more of a nutritional punch while still offering a luscious pumpkin pie-flavored treat.

Chia seeds can be used instead of hemp seeds. I used hemp because it is less noticeable in the mixture. If serving this smoothie to children, hemp seed might be preferable.

If your ingredients for the smoothie aren’t already chilled and your banana is not sliced and frozen, just add several ice cubes when blending to achieve the same effect.

However, Honey Cinnamon Whipped Cream does require chilling of coconut milk at least overnight, preferably longer, so plan ahead.

Be sure to dip your glasses into date sugar (or coconut sugar) and cinnamon to keep this smoothie refined sugar free.