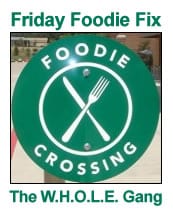 Diane’s Friday Foodie Fix for this week inspired me to make a dish I’ve always thought about making—a tabouli made using quinoa instead of bulgur wheat. Yikes, bulgur wheat … not something those of us who are gluten free want to eat. But, quinoa, on the other hand is gluten free, and it’s a nutritional powerhouse. The packaging of the Ancient Harvest Quinoa that I use states that it’s “one of the best sources of protein in the vegetable kingdom” according to the National Academy of Sciences. It provides all the essential amino acids. You can read more about quinoa’s wonderful benefits here. Diane also talks about quinoa’s redeeming qualities and shares not one, but five, of her recipes using quinoa (from salads to desserts). Based on past Friday Foodie Fix events, at least a dozen more great quinoa recipes will be added by other talented bloggers and readers before this weekend is over. So keep checking back at her W.H.O.L.E. Gang site.

Tabouli (also spelled tabbouleh or tabouleh) is a Middle Eastern dish. Wikipedia says it’s a Levantine Arab dish and cites the typical ingredients as bulgur wheat, mint, parsley, tomato, scallion, herbs, lemon juice, olive oil, and seasonings. Sometimes, so much parsley and mint is used in tabouli that the dish looks very green, but most tabouli I’ve seen looks more like a rice pilaf dish. That’s the look I decided to go for with my version of tabouli.

I was first introduced to tabouli back in college. One of my friends had lived in the Middle East with her family as a teenager. She introduced me to both tabouli and hummus. I love good hummus. (It’s a great staple for those of us who are gluten free, and is widely available now.) But, tabouli was, uh, interesting, to me. I decided it was okay, but it was not something I wanted to eat often or in large amounts. Maybe my body was speaking to me (“no bulgur wheat—bad!”) or maybe it was just the mint factor. Actually, I prefer my mint in ice cream …you know, that kind with the chocolate chips. I’ve tried mint in tea (hot and cold) and dishes, but it’s just not my thing, and, honestly, it’s not something I’m going to work on changing. (But, there are other items on my “learn to eat” list as you all know.)

What could I substitute for the mint to get a similar effect with my tabouli? Well, in last week’s shopping trip, I picked up some cilantro to make Melissa’s Spicy Squash Salad. (I had planned to make Melissa’s wonderful salad for our support group meeting, but, alas, I ran out of time before the meeting. So, the butternut squash remains on the counter, as well as the Fuji apples … hopefully, I’ll make the salad this weekend—once I’m done helping my son with his apartment move.) So, I decided to use cilantro in place of the mint. I enjoy dishes with cilantro—when just the right amount is used; otherwise, I find it overpowering. But, used properly, cilantro adds a very nice freshness with its citrus-like taste.

We were having tacos last night, so after I cooked the quinoa I added most of the ingredients I had prepared for the tacos: red pepper, yellow pepper, green pepper, and sweet onion. I skipped the lettuce (Iceberg … hubby’s thing), mushrooms, and cheddar cheese, but I had some broccoli I’d lightly steamed, so I added some of that as well. Of course, garlic was a requirement; I added a clove of garlic (maybe more), minced. I wanted to add some chopped cucumber, but my cucumber was well past its prime … next time on the cucumber. 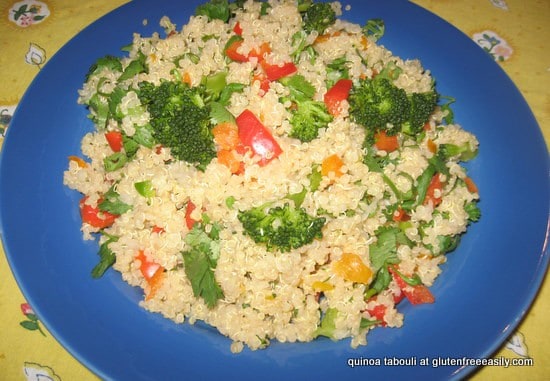 These amounts are approximates. Often I add enough of an ingredient until the dish looks “right.” I like colorful and I wanted a taste of all of these ingredients in every bite. “Chopped” means coarsely chopped to me, whereas, “diced” means I went for a finer chopping. When making your own tabouli you can follow these guidelines, but really just add whatever you like and cut your ingredients as fine as you like them. There is no right or wrong way. I didn't add any seasonings or dressing when I served this dish hot; however, when I served it cold the next day, I added some balsamic vinegar, olive oil, and sea salt. (The latter version was consumed very quickly when taken to a family gathering.)

You can eat the tabouli while your quinoa is still hot, right after you’ve added the other ingredients, or you can eat it cold. (Some say that quinoa tastes better after you let it “rest.”) Because we were having tacos, I placed a little taco meat* in the taco shell and then filled it with the tabouli. This tabouli taco was unbelievably good. My usual tacos include cheddar cheese, but I didn’t miss that at all. I ate two tacos! But, they were probably the best and healthiest tacos I’ve ever eaten!

If you are using your quinoa tabouli as more of a cold salad, you can opt for a dressing of some type. It doesn’t have to be anything hard to make—perhaps a mixture of lemon juice, olive oil, and seasonings; or just squeeze some fresh lemon juice or drizzle a little olive oil over your tabouli. My friends, Pete and Kelli, of No Gluten, No Problem shared the basics on a quinoa salad they first enjoyed in Bolivia with another classic, easy dressing. Again, very simple, but delicious—and, naturally gluten free. If you’ve never had quinoa before, give it a try in this tabouli dish. I think you’ll love it! If you’re already a big quinoa and tabouli fan, please share your favorite way to prepare it.

*We use ground venison and the recipe from the Betty Crocker cookbook for seasoning … no packaged mixes required with their additives and preservatives.

« Slow Cooker Jambalaya
Some Assembly, But No Special Tools Required—50+ Meals That Are GFE »