It’s day 4 of SSS—Suite of Sweets for Sweethearts! When I shared My First Raw Pie I mentioned that one of the other recipes I planned to make later was a Raw Pecan Pie. I like pecan pie. A lot. It can be a bit intense though—a jolt of sweetness–so it’s not a pie that I make very often. I did make a Crustless Pecan Pie for Thanksgiving that my family loved and a few gfe readers have really enjoyed as well. However, this Raw Pecan Pie appealed to me because it’s naturally gluten free and dairy free. Plus, it takes its sweetness from dates, and honey, if used, which also makes it refined sugar free. If no sweetener or agave nectar is added, this pie will also be vegan. 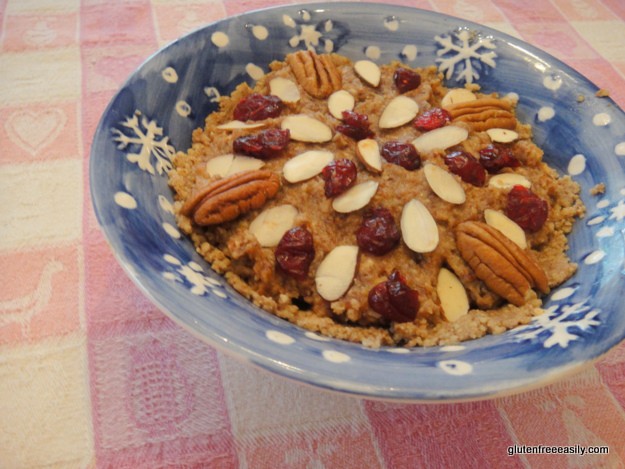 Like the first raw pie I made, this one has a great taste. It really pretty much tastes like what you expect a pecan pie to taste like … just not over-the-top sweet. Instead, it’s just sweet enough for my taste. And, once again, I was impressed that I could actually cut this raw pie into slices like a traditional baked pie. A small piece is more than enough, because this pie is delightfully dense and filling, although it doesn’t taste “heavy” in any way. I would have a hard time choosing between this raw version and my baked Crustless Pecan Pie. This pie is healthy enough to eat for breakfast and that’s just what I am going to do! (Incidentally, offering a piece for breakfast may be a way to get your raw food skeptics to give it a try.) 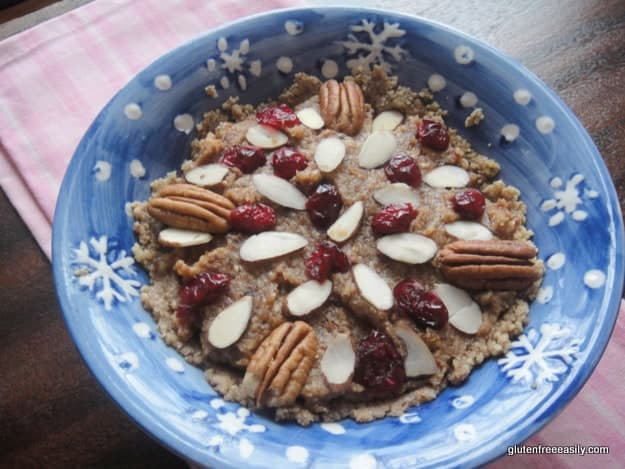 Freezing the pecans is supposed to make them bind better with the shortening to make a more viable crust. I'm not sure if that's really necessary. I froze my pecan halves fairly quickly by spreading them out on an uncovered cookie sheet in the freezer. However, you can try them without freezing and just process with the coconut oil a shorter amount of time. I liquefied my coconut oil just by having the small amount in a bowl on top of my stove while I baked something else. Melted butter (dairy or non-dairy) can be used instead of coconut oil. (Of course, with the addition of dairy butter, this pie would neither be dairy free nor vegan.) In the filling, ½ cup of raisins and ½ cup pecans can be added instead of 1 cup of pecans.
Finally, I used sliced raw almonds and dried cranberries for garnish.Pie crust adapted from recipe from About.com. Filling adapted from a recipe included in newspaper article attributed to Beth Wood, Creators.com. 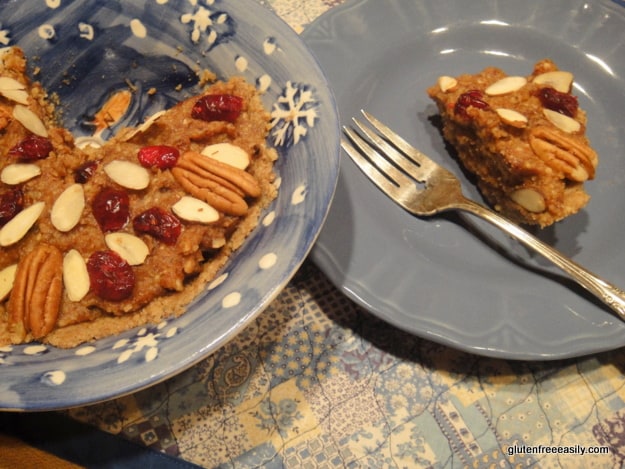 Enjoy your day off from baking! Be sure to check out previous Suite of Sweets for Sweethearts entries:

Here are some more gluten-free pecan pie recipes you’ll want to check out: