Warning: If you get easily overwhelmed, you might not want to read this post. There’s a lot in it! But, if you like choosing from a big buffet (of sorts), well, then head to the front of the line and start sampling! 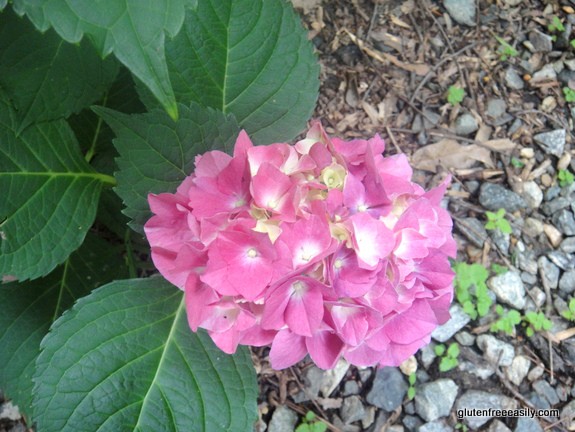 First, a photo from the gfe homefront. My pink hydrangea is blooming with gorgeous flowers right now. This hydrangea was given to us when my father-in-law passed away several years ago. My brother-in-law’s mother, Jacquie, sent it to us as her expression of sympathy. Jacquie passed away unexpectedly right before Mother’s Day, only a month ago. She was a key part of our family, celebrating holidays and going on family vacations with us from time to time, and the sudden loss was a shock. “Her” hydrangea is more beautiful than ever this year and I can’t help but look at it with joy, and feel comforted. Deep pink was one of her favorite colors and is one of mine as well. Ironically (or so I thought), this photo with the gravel in the driveway as part of the background was the best of the ones I took. Yet I sort of liked the contrast of the bluestone gravel, and when I looked closer I saw all the small green “volunteer” plants and smiled. Most of them are from the lemon balm plant that my father-in-law gave me a long, long time ago. He was primarily a gardener of vegetables, but was also well known for his numerous varieties of mint and his lemon balm. The lemon balm has spread like wildfire down the hill over the years, but seeing these new volunteers juxtaposed against the hydrangea makes me smile. There are bright spots and messages of comfort everywhere … we just have to see them.

The other day I featured Melanie Krumrey and her blog, Gluten-Free Krums, as my latest adopted blogger in the Adopt a Gluten-Free blogger event. I mentioned her wonderful educational book on celiac/gluten intolerance, Bagels, Buddy, and Me. Well, great news … Melanie has graciously offered a copy of it for a gfe giveaway. Head over to my Out and About page to read reviews and enter the giveaway.

Last week, I told you about the Foodspring blogger contest and asked you to vote for my good friend, Amy Green (Simply Sugar and Gluten-Free), if you thought she deserved to win. Well, you clearly agreed with me because Amy won!! Yes, Amy will be headed to New York City at the end of this month for the Summer Fancy Food Show. How cool is that? She’ll be a phenomenal representative for gluten-free bloggers and celiac/gluten intolerance awareness!

Amy also just announced a special edition of Slightly Indulgent Tuesdays focused on healthier, gluten-free snacks. Mark your calendars for June 29 and share a standby, favorite gluten-free snack or a newly created one that makes the healthy cut. As Amy said, gluten-free moms will be waiting for your solutions!

The lovely Zoe (Z’s Cup of Tea) is this month’s host of Go Ahead Honey! It’s Gluten Free. Zoe selected Cream of the Crop: Dairy-Free Delights as her theme. Go Ahead Honey was created by another one of our favorites, Naomi Devlin. The carnival has been going on for a couple of years now. Read all the details on how to join in here. Oh, and Zoe just joined Twitter, too. You can follow her here.

Speaking of Zoe, she shared her Roasted Bell Pepper Egg in a Basket recipe last week at Amy’s Slightly Indulgent Tuesdays roundup. I read Zoe’s post, watched her step-by-step demonstration video, and made one of her delicious “baskets” this weekend. My yellow bell pepper ended up a bit blackened, but I like my roasted veggies slightly singed. And, I used a few more partial pepper rings on the outside (which worked well for my egg “overflow”), but what do you think? I think that Zoe’s method is a very clever way to prepare eggs, both for presentation and taste. I had been getting bored with basic fried eggs, but with the sweet, crunchy bite of the yellow pepper, I’ll be happily back to eating eggs again. 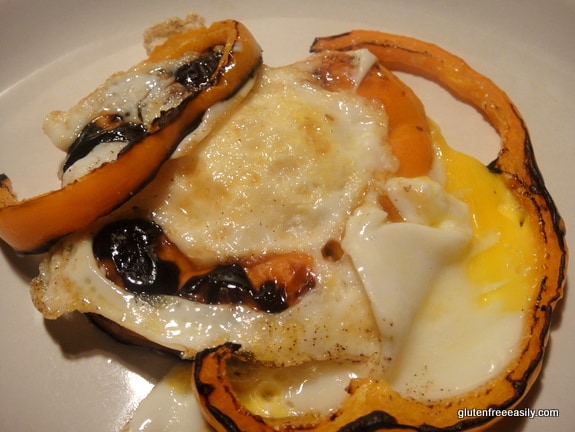 As most of you know, Diane’s (The W.H.O.L.E. Gang) 30 Days to a Food Revolution wrapped up its initial 30 days. Yes, that “initial” wording means that it’s continuing on! The 30-day period was not nearly long enough to cover all the bloggers who wanted to participate. Nor was one post enough for some of the bloggers who participated in the first 30 days; they have more to share! So, every Tuesday at Diane’s, there will be a Food Revolution post with another blogger’s perspective, tips, and, of course, a real food recipe. I’m thrilled about this turn of events because I was really sad to see the first 30 days end. I looked forward to finding a new post each weekday and gleaning knowledge and recipes. Now I can still get my weekly fix! Check out the latest post from Rella of Penny Pinching Epicure here.

Diane, never one to let any grass grow under her feet (uh, understatement!), also just published her ecookbook, The Gluten-Free Diner. Check it out and order it here.  Plus, she’s got a contest/giveaway going on—one which I just love, frankly. For Diane’s contest, you submit your own homemade version of Hamburger Helper. The goal is a quick, healthy recipes that emulates the helper idea and that is, of course, gluten free. See Diane’s delicious version and recipe, and read more.

Carrie (Ginger Lemon Girl) just started a new series called 30 Days of Gluten-Free Quick and Easy Meals. The series will feature healthy, gluten-free meals that you can make in 20 minutes or less. Yes, you read that right! Carrie supplied the first two recipes, but for the remaining posts, guest bloggers will be sharing their quick and easy favorites. I’m happy to say that I’m joining in, as are many of my other favorite bloggers, plus some bloggers who are new to me. I love meeting new bloggers and I think this series is what many of us have been asking for. Now, when we get home late or are uninspired, we can head over to Carrie’s site for a quick and easy recipe or for inspiration regarding the ingredients we have on hand. After all, sometimes we just need a concept and a “push” to come up with a terrific quick meal.

My friend, Jessica (ATX Gluten Free), is one of the finalists in the Udi’s and Gluten Freeville’s Be Udiful recipe contest. If you don’t already know, Udi’s makes the shelf-stable bread that everyone has been raving over. It truly tastes like you would expect bread to taste. You don’t have to toast it. You can leave it on the counter. While I’ve said before that I don’t really miss bread, Udi’s would certainly be nice to have on hand for an occasional sandwich or toast. Son has a nearby store that carries Udi’s bread and buys at least a loaf a week, usually two. Udi’s also makes bagels (yes! I had one at our last GIG meeting and they are quite good). And, pizza crust and cinnamon rolls. Check out all the contest entrants and vote for the one whose recipes appeals to you most, but I hope it’s Jessica! Vote quickly … the contest ends this Friday at 11:59 pm Pacific. 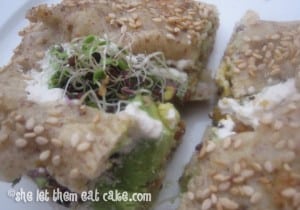 No Udi’s supplier near you, but you are saying bad words at me because now you want a bagel? No worries. Check out Maggie’s recipe and make your own. No, I am not kidding. Homemade bagels that are gluten free, dairy free, and egg free! (I believe you can use dairy milk in place of the non-dairy milk if you eat dairy.) There’s even a review from Jenn (Jenn Cuisine) in the comments for this post! Maggie also recently adopted one of my new blogging buddies, Lexie (Lexie’s Kitchen), for the Adopt a Gluten-Free Blogger event. You can read that post here. There are chocolate truffles involved!

Three kids and three blogs are not enough to keep my sweet buddy, Stephanie (A Year of Slow Cooking, Totally Together Journal, and Totally Together Reviews), entertained; she’s hosting a book club! Actually, she says she needs something to feed her brain and she decided a book club is the answer. I get that. Some days it feels like my brain is best fed by my time spent in the car … going to and from work listening to audio books. Stephanie states that the book club has nothing to do with food. Her first selection is a book I read on my trip to Key West, The Help, by Kathryn Stockett. This is Stockett’s first book and it’s outstanding. The characters, story, and message will remain with you long after you have turned the last page or pushed stop for the audio version (that’s next for my daily drive listening). Find out all about Stephanie’s book club event here. (Incidentally, before our neighbors knew I hosted gluten-free support group meetings once a month, they thought I was holding book club meetings.)

You guys know how much I love my support group. Well, last night I got an email from one of our founding members—my friend, DeLaura. DeLaura is also the mom to one of our group’s best bakers, her 10-year old daughter, Maren. Here’s what DeLaura shared: “I smiled this morning when Maren made this lovely cobbler for our breakfast (red currant, raspberry, cherry and 2 little blueberries!). Crust is almond flour, shredded coconut, flax meal and a little millet flour. Then she ran for the camera… you’re a big influence on her! xo” Receiving that email with Maren’s photos just made my day! Check out her gorgeous (and healthy) cobbler creation. Last month for our tea event, Maren made jam thumbprint cookies from coconut flour, also shown below. If you’re local, she also sells a few baked goods at the farmers’ market each week, so you might want to stop by and pick some up. 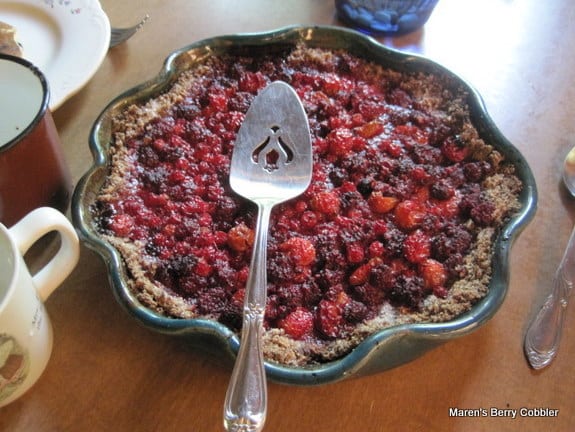 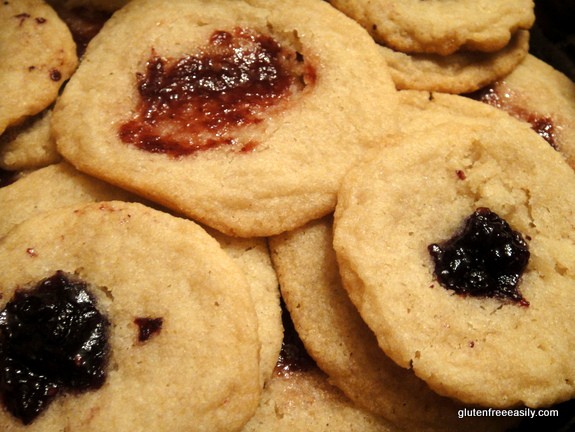 Back to Maren’s mom … DeLaura. DeLaura also happens to be the manager of our local farmers’ market, which just celebrated its one-year anniversary. She’s done an absolutely amazing job making the farmers’ market a vital part of our community! It’s a happy place with fresh, real food; flowers; herbs; and much more. Everyone wants to be there on Saturdays! The only thing that could make our farmers’ better would be a site with a permanent structure (so the participants wouldn’t have to set up tents in the school parking lot each week) and a nice marketing budget. Well, it just so happens that the American Farmland Trust is holding a contest for the Favorite Farmer’s Market. The prize is a nice monetary award to get the word out about the winning market. You can vote on more than one favorite, but you can only vote once for each one. Please read more and vote using the button below.

Hope you found something you liked in my “roundup” today. Don’t forget to enter the giveaway for Bagels, Buddy, and Me!