With Labor Day weekend here—and perhaps many of you getting in another cookout or barbecue event—I thought it was time to finally share this recipe for gluten-free Zesty Italian Barbecue Chicken with you all. I’ve mentioned this three-ingredient recipe in passing before but I’ve never devoted a post to it.

Until today! The timing seems right as we’re now officially celebrating what we usually consider to be the last official weekend of summer.

While fall doesn’t start until September 22, Labor Day weekend is considered the end of summer because by Tuesday all the children will be back in school. Our local county schools started 2 weeks ago and so did a few other area school systems but all will be “back in business” next week.

We had hoped to be camping once again at our mountain property this weekend but the weather forecast nixed that so we will grill and cook at home instead! 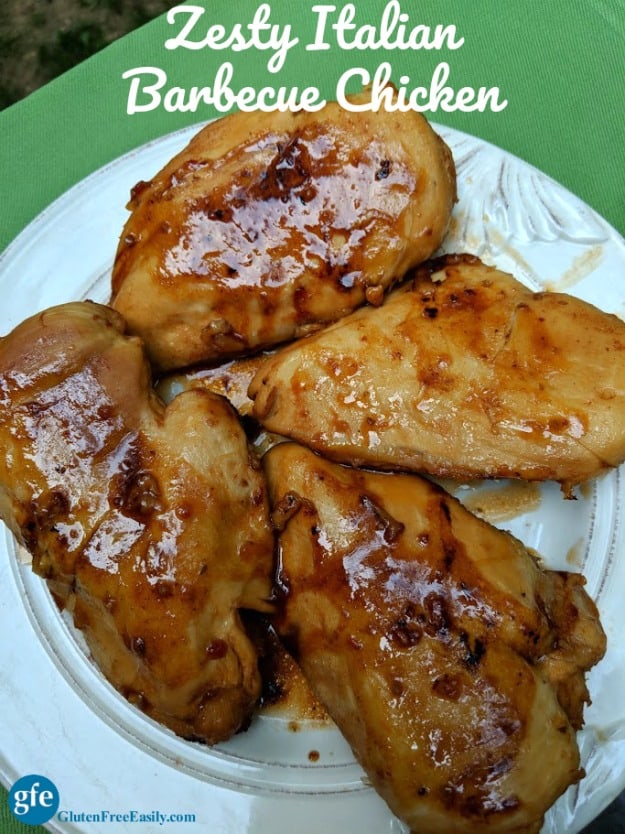 Remember that focusing on foods that are naturally gluten free—and recipes made from those foods—is the main focus of the gfe approach. It’s the simpler, easier, less expensive, and healthier way to live gluten free.

Plus, these are the recipes that the whole family will love because there’s no need to adjust to new ingredients (which often also means new textures). They’re simply eating what they’ve always eaten while you and other gluten-free members are as well—all while eating safely.

Because this gluten-free Zesty Italian Barbecue Chicken is full of flavor and the chicken stays moist and tender, one might think it is a complicated and difficult-to-make recipe but it isn’t. Not at all.

As most of us know, all too often barbecue chicken ends up being overcooked, dried out, and chewy versus moist and tender. The latter means you end up with attractive and delicious chicken; the former does not. 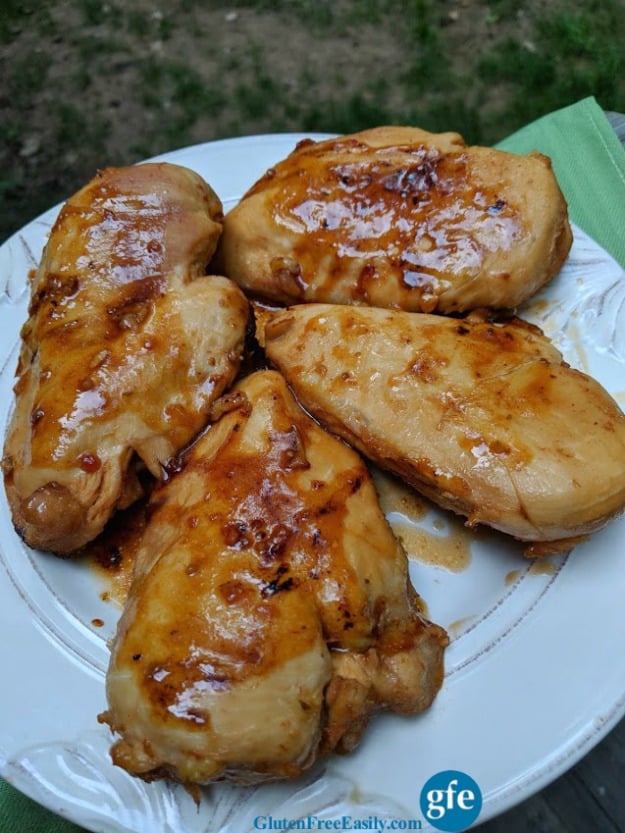 I prefer equal amounts of barbecue sauce and Italian dressing. Specifically, a cup of each.

The two cups of marinade can actually marinate a fairly large amount of chicken. As you can see by the photos, I marinated four very large chicken breasts.

At home, I make this gluten-free Zesty Italian Barbecue Chicken in the oven. When we’re camping, I cook the chicken on the grill. Again, it’s terrific either way. I hope you’ll think so, too!

Some like to poke holes in the chicken pieces before marinating. I don't usually do that but you may decide to do that if you aren't able to marinate your chicken for a very long time before cooking as it will help "infuse" the chicken with the marinade.

Because I like my chicken a little more grilled/more cooked on the outside, if I’m baking the chicken, I drain off some of the combined sauce and drippings before the last 10 minutes of baking time.

When I know I'm going to make this recipe while camping, I place the chicken in the marinade in a Ziploc bag or a large Tupperware container and then place that in our cooler until shortly before grilling time.