I know you all have been waiting patiently for this last installment in this edition of the Skillet Supper Series. I say this edition because yes, there will be more to come after today’s recipe for naturally gluten-free Porcupine Meatballs. I have a fondness for triple letter series, especially SSS. There’s another SSS series here at gfe—Suite of Sweets for Your Sweethearts at Valentine’s Day. There’s MMM, March Muffin Madness, when some folks are very preoccupied with hoops and brackets. There’s even Pumpkin Pie Plus. It’s October so I expect you’ll be seeing a comeback from that series very soon! 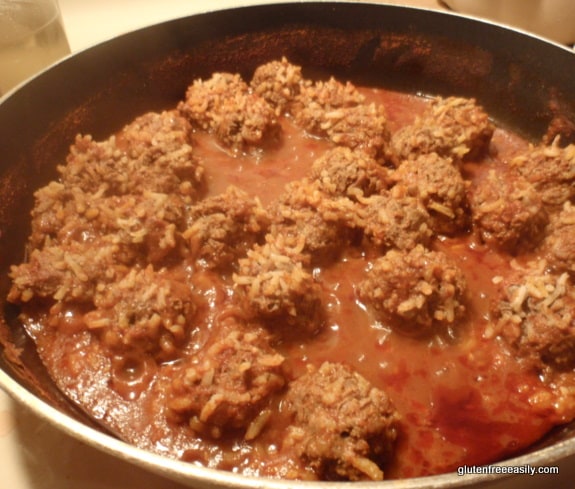 I’ve been sharing a lot of old favorites for this Skillet Supper Series, some of which had to be tweaked a bit to be gluten free, dairy free, refined sugar free, unprocessed, etc. Porcupine Meatballs are a meal idea that needs no adjustments at all. The ingredients are naturally gluten free, dairy free, refined sugar free (if certain ingredients are used),  pretty much unprocessed, and best of all, they are kid friendly!  (Well, friendly for most kids anyway.)

Initially, children are intrigued by the name of this recipe. If it’s your first time making them for your family, be prepared for some questions. Did these meatballs really come from a porcupine, mom? Aren’t you supposed to stay away from porcupines? Where did you get this porcupine, mom? I don’t want to eat porcupine quills! The questions and comments go on and on and will make you laugh out loud.

Of course, the reason these meatballs are called Porcupine Meatballs is because the rice that’s been added pokes out of the meatballs like porcupine quills. In fact, the appearance can be a bit deceiving.

When I placed Porcupine Meatballs in front of Son for the very first time (I think he was about 5 or so at the time), he thought that all the white protrusions were onions. That was not good, because Son was onion-phobic at the time (and admittedly still has a few issues at the age of almost 24).

So he immediately protested and even though I kept telling him that the white things were rice, he simply would not believe me. After a few bites, he asked to be excused to visit his grandparents, my mom and dad, who lived just up the hill from us at the time.

“Mamaw,” he cried, “It was just awful … there were onions everywhere!” We still laugh over that story, although I’m not really sure Son’s ever developed a love for Porcupine Meatballs. So, be sure to tell your children what the ingredients are (or are not, in this case) before you serve Porcupine Meatballs. 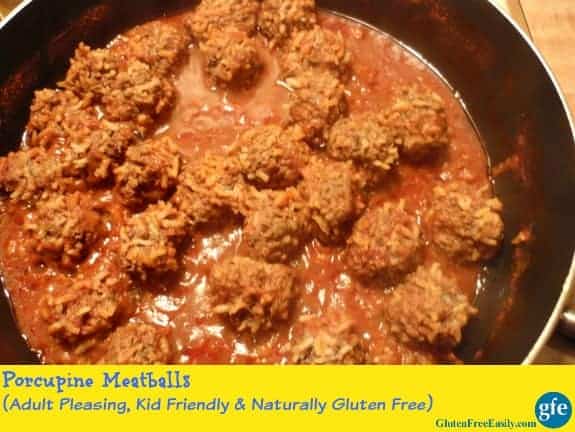 Get your children involved in making the meatballs, too. They’ll be sure to eat twice as many if they make them. Seriously. There’s that whole “vested interest” concept. Plus, getting kids involved in the kitchen at an early age can foster a lifelong love of cooking and real food versus a diet of processed foods.

Personally, I’ve also found that meatballs formed with little hands are much more tender. Who wants a tough meatball? Son always made better meatballs than I did. We made sure that he knew that and he always jumped right in to make meatballs. I don’t think he ever made Porcupine Meatballs due to his aforementioned phobia and “trauma,” but he did make the meatballs for our spaghetti and meatball dinners all the time. (That’s a super easy, delicious recipe I’ll have to share another time.) 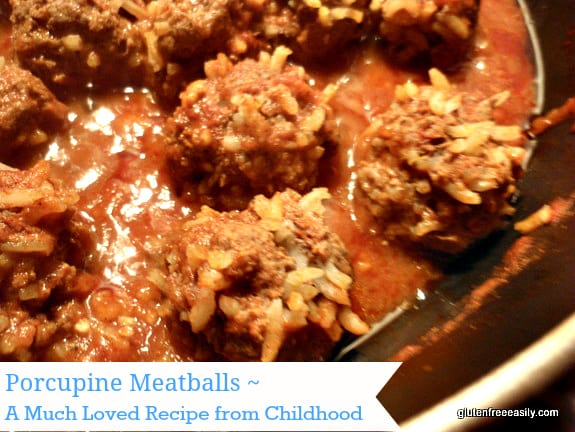 Porcupine meatballs make for an easy meal, served with some steamed or roasted vegetables on the side, or you can throw a few veggies right in the skillet at the end. Adding them during the last 10 or 15 minutes works well. Perhaps some frozen corn, peas, or green beans. For tonight’s meal, I added corn during the last 10 minutes of cooking. You can even add some veggies to the meatballs themselves, both as added nutrition and as another way to keep this recipe a one-dish meal.

For example, tonight’s porcupine meatballs also included chopped mushrooms. Mr. GFE loved this addition. He also suggested that I might add pineapple chunks to the sauce versus veggies in the future. Hmmm, Polynesian Porcupine Meatballs anyone? I admit … they do sound pretty good! 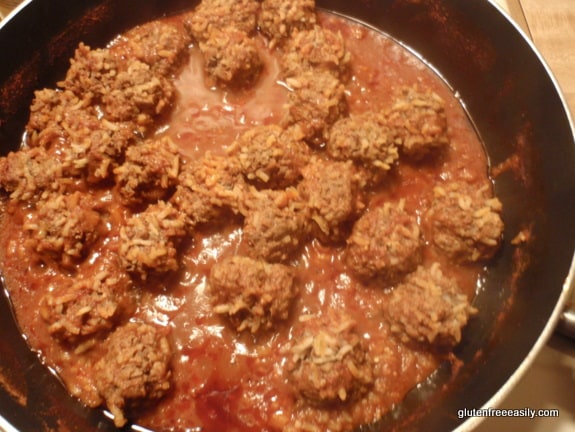 Instead of tomato juice, you may use watered down tomato paste, tomato sauce, or similar. I’ve used V-8 in place of tomato juice before and I’ve even used finely diced tomatoes with green chiles (undrained) for us “big kids.”

If you need a substitute for Worcestershire sauce, you can use 1 tbsp of balsamic vinegar (great idea that Ina of Gluten Free Delightfully Delicious just shared with me!); or 1 ¼ tsp hot sauce, ¼ tsp dry mustard, and ½ tsp honey. Feel free to play around with the meatball ingredients.

If you have a child who won’t eat onions, consider using a teaspoon of onion powder and/or adding another ingredient like grated carrots or grated celery for added nutrition and taste. Mr. GFE loves it when I add chopped mushrooms (about ½ cup) to the porcupine meatballs.

I use long grain white rice in these meatballs. Brown rice would require a longer cooking time and perhaps more sauce, plus even some presoaking I expect. I’m really not totally sure on brown rice. (For only a half cup of rice, I don’t mind using white rice in this recipe.) Minute rice might work, but in that case, cooking time would be less and, therefore, probably less sauce required as there would not be sufficient “reduction” time, so you would need to make adjustments.

I know some folks who prefer a white sauce for their Porcupine Meatballs---like one you would make as sausage gravy.

Some Porcupine Meatball recipes call for eggs, but they are not needed—yippee for the egg-free folks!

Finally, I know some folks who even make an oven version of these. I haven’t tried an oven version, so I’m not sure on sauce amounts or oven temperature, but you may want to search for that info if that method appeals to you.

Recipe adapted from one provided by Carol, the parent of one of my third-grade students from my teaching days long ago. 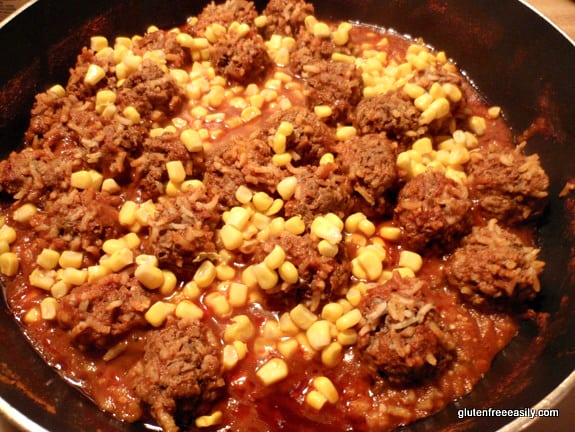