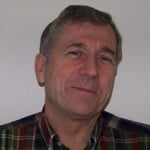 Today I have the distinct pleasure of sharing a guest post from Ron Hoggan. Ron was the guest speaker at my support group’s annual open house back in November. He currently lives on Vancouver Island (and previously many years in Calgary) and my group is in Virginia, but we “Skyped” him in. I have the utmost respect for everything Ron Hoggan has done for awareness regarding celiac and all gluten issues. Everyone in attendance at the open house was both impressed by and grateful for his presentation, The Many Faces of Gluten-Induced Illness. They were especially appreciative of the very informative question & answer session afterwards.

Here’s some additional information on Ron Hoggan. He has a doctorate in education. His ongoing research explores the impact of gluten consumption on school readiness, behavioral function, cognitive function, and learning disabilities. A retired high school teacher, Ron continues to pursue peer-reviewed research and publication. He is the editor of the Journal of Gluten Sensitivity and the author of the books, Dangerous Grains and The Iron Edge. Ron has also written many articles for the popular media about dietary interventions. He will soon begin teaching continuing education classes at the college-level:  one class will be on the psychological/psychiatric impact of gluten consumption, and the other is about reversing Type 2 diabetes and metabolic syndrome.

I’ve been a fan of Ron Hoggan’s since I was first diagnosed as gluten intolerant in 2003. Among my homework assignments from my doctor was one to read Ron’s first book, Dangerous Grains. I read it immediately. For someone like myself who has suffered from various symptoms and conditions as far back as I could remember, this book read like a suspense novel—a page turner that inspired feelings of surprise, validation, excitement, and anxiety (among others). I have suggested this book to many since.

I became much more of a fan of Ron’s after he responded to a query of mine on the Celiac Listserv. As I was thanking him for his reply, I got the idea to ask him about speaking at our group’s fifth anniversary open house. Keep in mind that Ron and I had never met or even spoken before this email exchange, but he readily agreed to speak to my group. Soon we were talking via email, testing Skype, and running dry runs of his presentation to test out the equipment at the facility where the open house was being held. There were a few glitches here and there, for sure, but Ron was unflappable. I’m convinced his friendly and adaptable nature is helping him be an effective messenger for  awareness of celiac and other gluten-related illnesses, as much as the validity of the content he shares. And, after working with Ron on our open house, I’m even more of a fan of his.

I am also a subscriber of the Journal of Gluten Sensitivity, which Ron edits. (Some of you may recognize that publication better when I tell you that it’s the publication associated with celiac.com.) It’s really an excellent publication. The articles, many of which are written by Ron himself, are always well-researched, diverse in their subject matter, and compelling. They are usually written by well-known spokespeople in the gluten-free community. (For example, my good friend and fellow blogger, Melissa McLean Jory, the author of Gluten Free for Good, has written nutritional articles for the Journal of Gluten Sensitivity.)

Rather than try to summarize Ron’s work, I asked him to share 20 things we should know about gluten’s effects. I was so appreciative when he emailed his listing in less than 24 hours. Courtesy of Ron Hoggan, here is the Top 20 list for my gfe readers. (Note that definitions for bolded terms are shown at the end of the listing.)

1. Gluten can be undermining your health without any symptoms.

3. Replacing gluten with other highly glycemic, highly processed “replacement” foods is not the path to optimal nutrition.

4. Gluten can have a dramatic impact on psychological wellness and may be at the root of many cases of schizophrenia and bipolar disorder.

5. Gluten can interfere with children’s academic performance and school readiness.

6. The stricter the GF diet, the greater the potential benefit.

7. Gluten is highly addictive through the opioid peptides it contains and the excessive zonulin production it incites. Zonulin allows these opioids access to the bloodstream and the brain.

8. Grains are highly glycemic and aren’t a healthy food for anyone.

9. Gluten-induced illness can take many forms, including more than 200 diseases, syndromes, and conditions.

10 Gluten can contribute to the onset and development of a variety of cancers.

11. It is not a sacrifice to give up gluten. It is a gift to understand the need to give it up.

12. Osteoporosis can be reversed when it is caused by gluten.

13. Neurological disease is often caused or exacerbated by gluten.

14. Dementia, when driven by gluten, can be reversed with a gluten-free diet.

15. Wheat germ agglutinin can bypass tight epithelial junctions even in the absence of gluten sensitivity or celiac disease.

16. A variety of human tissues are damaged just from direct exposure to gluten in a Petri dish.

17. Our digestive tracts lack the length, enzymes, and other features that would signal human adaptation to eating grains.

18. Skeletal remains of people who adopted grain agriculture show that they are shorter in stature and have abnormal bone structures suggesting nutrient deficiencies.

19. Depression is the most common symptom of celiac disease.

21. A brief trial of a gluten-free diet can’t hurt, and the harder it is to follow the diet, the more likely you need to avoid gluten.

–Zonulin is a protein that participates in tight junctions between cells of the wall of the digestive tract. Initially discovered in 2000 as the target of zonula occludens toxin, secreted by cholera pathogen Vibrio cholerae, it has been implicated in the pathogenesis of coeliac disease and diabetes mellitus type 1. (Wikipedia)

–“Haptoglobin is a molecule that has been known to scientists for many years. It was identified as a marker of inflammation in the body. Haptoglobin 1 is the original form of the haptoglobin molecule, and scientists believe it evolved 800 million years ago. Haptoglobin 2 is a permutation found only in humans.” Science Daily Sept 7, 2009. Dr. Alessio Fasano has stated that only about 80% of humans have haptoglobin 2. The other 20% are therefore safe from developing autoimmune diseases, just as other primates are.

–An opioid is a chemical that works by binding to opioid receptors, which are found principally in the central nervous system and the gastrointestinal tract. The receptors in these two organ systems mediate both the beneficial effects and the side effects of opioids.

The analgesic effects of opioids are due to decreased perception of pain and decreased reaction to pain, as well as increased pain tolerance. The side effects of opioids include sedation, respiratory depression, and constipation. Opioids can cause cough suppression, which can be both an indication for opioid administration or an unintended side effect. Physical dependence can develop with ongoing administration of opioids, leading to a withdrawal syndrome with abrupt discontinuation. Opioids can produce a feeling of euphoria, and this effect, coupled with physical dependence, can lead to recreational use of opioids by many individuals.

Although the term opiate is often used as a synonym for opioid, the term is more properly limited to the natural alkaloids found in the resin of the opium poppy and, more loosely, the semi-synthetic opioids derived from them. (Wikipedia)

–Agglutinin is “a substance that will cause a clumping of particles such as bacteria or erythrocytes. Of major importance are the specific or immune agglutinins, which are antibodies that will agglutinate bacteria containing the corresponding antigens on their surfaces.” (Sci-Tech Encyclopedia)

–Epithelial – In biology and medicine, an epithelium is a tissue composed of cells that line the cavities and surfaces of structures throughout the body. (wikipedia) The epithelial cells that line the intestines form a single layer that acts as a barrier between the gut and the bloodstream. The barrier function of the tight junctions between these cells is critical to our protection from the “outside” world, from which we selectively absorb valuable nutrients while blocking the absorption of larger molecules that can be very harmful.

I hope you will consider this top 20 listing from Ron in reference to your own health and share this listing with others as well. If you’d like to learn more, I’m hosting a giveaway of several of Ron’s books and videos. Just click over to my Out and About page to enter.