Along with pound cake, bread pudding is a dessert I grew up eating. I think of it as an “old school,” old-fashioned dessert—one that I dearly loved—and today I want to share my gluten-free Old-Fashioned Bread Pudding recipe with you. 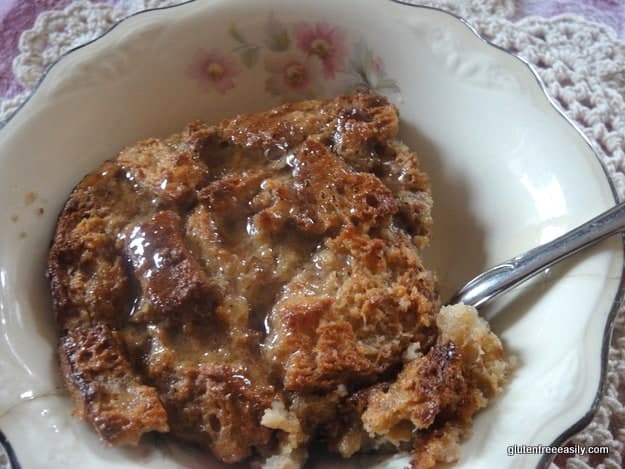 One of my grandmothers made great bread pudding. It was one of the few things she was still making “from scratch” when I was growing up.

My mom’s bread pudding was very similar to that made by my dad’s mother—both in taste and quality. Of course, I learned from both of them and made bread pudding the same way—using stale bread and saved ends of bread and throwing it all together with a few eggs, spices, and milk.

To be clear, there was never a recipe. You sort of eyeballed how much bread you had once you crumbled it in a bowl, covered it with milk, added some eggs, and went on from there.

This method actually worked pretty well, but you were never 100% sure your bread pudding would be a success until you had your first bite.

Then one day a good friend of mine, Denise, brought her bread pudding into work for a luncheon. It was truly wonderful!

It had a rich custard flavor, but wasn’t heavy in any way, and the cinnamon, nutmeg, and vanilla made both the smell and taste lovely. Best of all, Denise had an actual recipe … with measurements.

What a concept! LOL

With her recipe, I and anyone else could re-create delicious bread pudding again and again—with no moments of uncertainty. I passed the recipe on to my mom and she’s also been enjoying using it for many years now.

Yes, Denise’s bread pudding recipe guarantees success every time.  Incidentally, Denise also made a scrumptious pound cake. That recipe she would not share. Not yet anyway!

She made her pound cakes for everyone during the holidays. As you can imagine, nobody complained about the lack of the actual recipe when they had that gift in hand!

Of course, going gluten free made me push the bread pudding recipe card to the back of the box. But, when I had some leftover gluten-free challah bread from a vendor’s donation to our support group, I thought it was time to pull out the recipe again. (Using homemade gluten-free challah also works of course.) 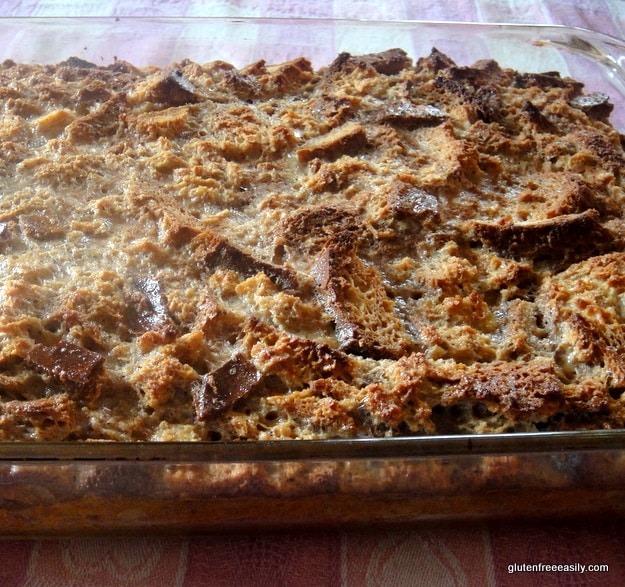 So start saving your stale bread and look forward to a delightful dessert. This gluten-free Bread Pudding makes a very nice breakfast, too.

Although bread pudding is often served with distinctive sauces like lemon, vanilla, caramel, and even whiskey, I grew up enjoying it with a little milk poured over it. (We actually did that for any type of pudding at my house–yum!) This time, I enjoyed my bread pudding with a drizzle of honey mixed with some vanilla.

Incidentally, Mr. GFE is not a big fan of bread pudding … unless I add some raisins, then he’ll enjoy a bowl or two. I added a small amount of raisins to part of the bread pudding mix left in the bowl to allow one section of the pan just for him. Unfortunately, I didn’t take any photos that really show the raisins.

By the way, the bowl in the photos is from my grandmother’s china. Even with cracks and chips, it gives me such joy to use it.

Spooning my gluten-free Old-Fashioned Bread Pudding out of this bowl, I can almost imagine myself back at Grandma’s table. And that’s a delight, because she’s been gone many years.

But I’m happy to say that I can still see the twinkle in her eyes and hear her voice, especially her laugh when she was truly tickled by something. 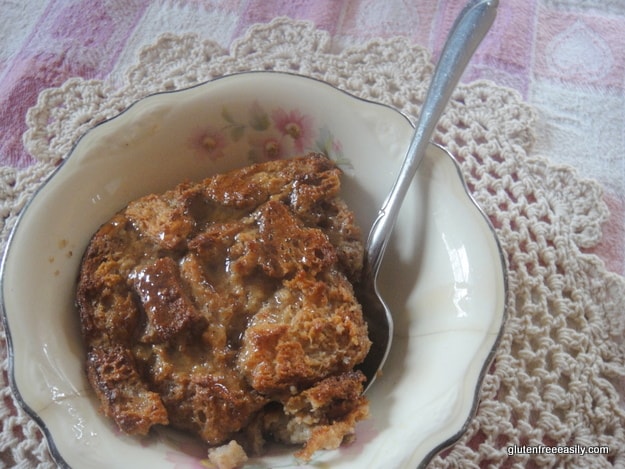 Any leftover bread, muffins, waffles, and such, should work in this recipe. Even the results of failed recipes for such “bread” products could potentially be used. If you only have a small amount at any given time, just stockpile them in a container in the freezer until you have 4 cups worth.

You can substitute for the evaporated milk. If using full-fat coconut milk, you can use the full can, which is generally about 14 ounces, but be sure to use only ½ cup of water in that case. Regular, whole, or 2% milk can also be used, but the resulting bread pudding won't be quite as "rich" as when made with evaporated milk or coconut milk.

Coconut sugar or palm sugar can easily be substituted for the granulated sugar for an even richer taste that's lower glycemic.

Adapted from a recipe from my friend, Denise