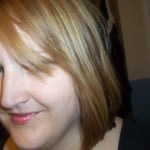 Dana blogs at Home*School*Home (update: and now also at Gluten Free:  What Can I Eat?). She is a medical trancriptionist and mom of 3 who lives in Kentucky.  She has been gluten free for 8 months and feels like a brand new person! Read the rest of her story to find about her personal journey to being gluten free and finding this “brand new person” within herself.

I was in college when I started feeling overwhelmingly exhausted and aching all over.  I began to go back to the dorm to take naps between classes.  I went to the doctor back then but really didn’t get any answers.  I just coped with it the best I could. I had to take a nap every day.  I’d get up in the morning and be okay for a while but by 2:00-3:00 p.m. each day, I’d be exhausted, aching all over with a foggy feeling in my head and pretty much always a headache to go with it.  I almost constantly had to go to the bathroom to urinate and would feel pain and pressure in my bladder even when I didn’t have to go.  My joints would ache.   Over the years I was diagnosed with interstitial cystitis, fibromyalgia, irritable bowel syndrome, colitis, depression, Raynaud’s phenomenon, bursitis (of all my joints at the same time!)  restless legs, anemia and chronic fatigue syndrome.  At one point I was so anemic that my hemoglobin was 8 when the normal range is 12-14 and I was dizzy and weak and lightheaded.  I have not, to this day, been diagnosed with celiac disease because I decided to skip testing and just try the diet.  I kind of regret that but I don’t want to go back on gluten to be tested.

Despite feeling exhausted all the time, I managed to have a life.  I got married and had 3 kids.  I continued to work and have homeschooled my kids. I’m fortunate that my husband and kids were very patient and tolerant of my need to nap.  I also worked at home as a medical transcriptionist so my job was flexible.   Sometimes I would be so exhausted; I would have to lie down during my work shift!  If I couldn’t nap for some reason, I had to take Tylenol and caffeine and just try to deal with it, but it wasn’t easy.  I planned everything around getting to sleep in the afternoon.  I homeschooled the kids in the morning, slept in the afternoon, worked 4 hours in the evening and then went to bed absolutely exhausted.

After more than 20 years of feeling exhausted and in pain pretty much all the time, I happened upon an article about a link between fibromyalgia and gluten intolerance.   I didn’t know if I believed it, but I felt that it might be worth a try. I started doing internet searches for gluten.  I started reading everything that I could about gluten, the symptoms and the diet.  Now I have always been overweight and I have never been able to stay on a diet.  Most of my diet efforts in the past would start on Monday morning and be over by Monday afternoon, but I kept reading.  I started thinking about what kinds of things I could eat and what I’d need to stop eating.  I found the Gluten Free Easily site in the first few weeks. I was comforted to know that I could make foods that would be gluten free and would taste good.  This was in November of last year and I was thrilled to read the turkey and surprise stuffing recipes.  I felt like I could really do this diet, and maybe not feel deprived.

I jumped in.  I messed up a few times.  One time I was at McDonald’s and had already ordered when my daughter said “Mom, doesn’t that have gluten in it?”  There were other times when I forgot to read labels or just thought I would risk it, but finally, I managed to stay gluten free for one day, then two, then after a week had elapsed, I realized that I was already feeling a lot better.  I decided to stay with it and despite my dismal dieting history, I was able to stay with it.   It was easier to stay on this diet than any other because the reward of feeling better was so great.   This past February we were on vacation and I decided just to go ahead and have a restaurant meal that contained bread and gravy because it would be worth it and hey, it was vacation.  That night in the hotel I had a horrible time of it and the next day, on the four hour drive home, my legs ached so bad that I couldn’t keep them still.  It was a miserable trip and so not worth it.

Over the past few months I’ve done more cooking out of necessity because most prepared foods contain gluten, but hey, that’s a healthy new habit.   I’ve learned to make most of the meals for my family gluten free.  Occasionally, I will cook something for them that I can’t eat, so that they can have things the way they used to be, but some of my new recipes have been very popular.

Now I’ve been gluten free for 8 months and my life has been transformed.  I only take a nap occasionally if I’ve missed out on sleep the night before and now my naps last 1/2 an hour or so, instead of 2 or 3 hours like they used to.  My legs don’t ache constantly.  I’m not in a brain fog.  I no longer have a headache every day.  I don’t have fibromyalgia tender spots all over my body.  My joints, with the occasional exception of my knees which have been sprained in the past, don’t hurt anymore.  I had a revelation a couple of weeks ago when I went on a visit to a historical fort with a friend and realized that I was walking easily up the third of 4 flights of stairs and was having no joint pain at all, no weakness and no fatigue.

Yesterday, I had a day that would have been impossible in my pre-gluten-free life. I cleaned my house all morning, I went shopping all afternoon with my daughter and ran a bunch of errands, then came home and did a workout video from Dancing with the Stars and still was not particularly tired.  I was able to get some other things done in the evening.  In my past life, cleaning the house would have worn me out, I would have had to schedule the shopping on a completely different day and kept the errands limited to maybe 2 at most because “a bunch of errands” would have completely exhausted me and there is no way I could’ve done that workout video.

Without gluten, I feel like a new person, strong and pain free.  It’s wonderful.  I’m so glad that the ‘cure’ for feeling awful all the time is something so simple.   It may not seem simple when you are trying to figure out a restaurant menu or a food or beauty product label, but when you think about it, really, it is. I don’t have to undergo chemotherapy or radiation, I don’t have to give myself daily shots, I don’t have to be on a lot of expensive medications and if I follow the Gluten Free Easily philosophy of just mainly eating naturally gluten free foods, it’s a snap.  Hey, there are 6 food groups; meat, vegetables, fruits, milk, meat and beans and oils and I can eat 5 of them!  I only have to be careful with that 1 group, grains.  Easy.  Peasy.

Shirley, here: Thanks so very much to Dana for sharing her story! Dana first commented here last fall and just a few times afterwards. I visited her homeschooling blog a short while later and sent her an encouraging comment, telling her that seeing results could take time. I shared my own experience that after months of being gluten free, one day I suddenly realized that I was running up and down stairs with ease and no pain. Out of the blue, Dana popped in here on gfe recently to say: “I just wanted to let you know that I had that moment, the one where I was walking up the stairs, easily, quickly and realized that I didn’t HURT! I’ve been gluten free for 8 months.” Incredibly moved by Dana’s comment and thrilled at her success, I asked her to share her story. I’m so grateful that she did. I hope you’ve appreciated it as well and will share it with others who may be struggling with health issues. The negative impact of gluten can be far reaching, but the gluten-free diet can provide relief to many.