Full disclosure: The folks at Stonyfield sent me some coupons for their organic yogurt before Christmas. Unfortunately, my local store didn’t carry Stonyfield products, so the coupons expired. However, the Stonyfield representative graciously sent me some more and I picked up a few products to try at the upscale grocery store in town. Stonyfield did not pay me to write this Chocolate Coconut Chia “Pet” Smoothie post and the opinion expressed is my own. 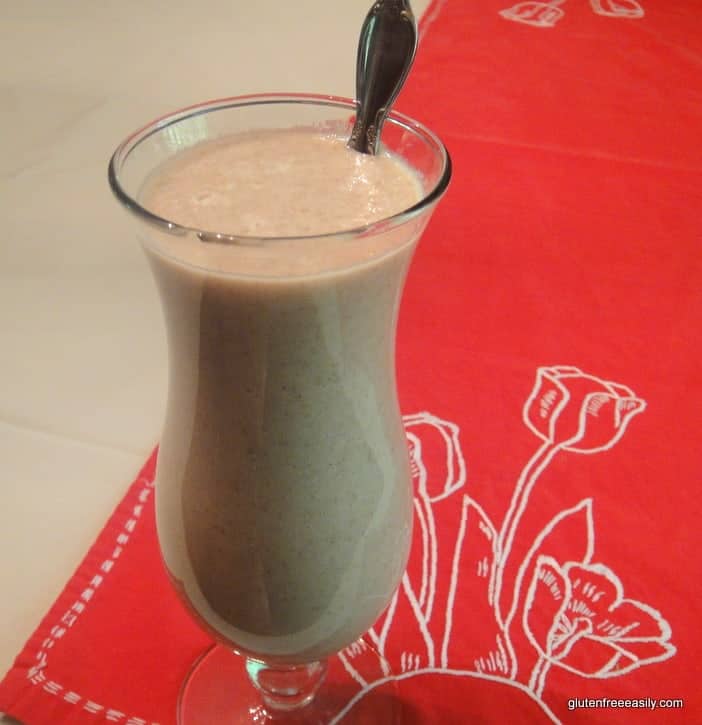 This Chocolate Coconut Chia “Pet” Smoothie recipe is my submission for this month’s Go Ahead Honey, It’s Gluten Free! blog carnival, which is hosted by its wonderful originator, Naomi Devlin, at her blog, Straight Into Bed Cakefree and Dried. The theme is Breakfast in Bed. Now who doesn’t fantasize about that?

My good friend, Melissa (Gluten Free for Good), posted a recipe for a Cherry Cabbage Chia Recovery Smoothie recently. It sounded absolutely divine on taste alone, but it was clear it was also super nutritious. (Melissa is a Nutritional Therapist, with a degree in Exercise Science. She is terrific when it comes to telling you all the benefits of specific foods—in delightful layman’s terms, too.) While I was sure I would love Melissa’s recipe just as it was, I didn’t have those ingredients on hand, and I had other similar ingredients that I needed to use before they spoiled; e.g., pears. Very ripe pears make for naturally sweet smoothies. I also included cabbage because I’ve discovered I love green cabbage in smoothies. If you are balking at making this smoothie because of the inclusion of the cabbage, please don’t be hesitant. I’ve found cabbage to be a lot like spinach in smoothies; it doesn’t stand out strongly to me. Rather I find that cabbage just enhances the taste and texture, of course, the nutrition. But, if you’re still doubtful, Melissa recommends Napa cabbage for “newbies” as Napa cabbage is much milder, so you can go that route if you’re still hesitant.

The title of my smoothie recipe comes from the ingredients used and because I was including chia seeds. As Melissa informs, chia seeds offer high-quality protein. They are full of those wonderful Omegas, antioxidants, and fiber, too. (You can read more about the benefits of chia here.) Plus, they give a little texture and crunch to this smoothie. After just a few sips, I knew this recipe was going to become a favorite smoothie flavor; i.e., a pet one. The truth is I just had to get a version of “chia pet” in that name somehow.

When I was first dating Mr. GFE, I was amused to learn that he and his family named all of their vehicles. Two of Mr. GFE’s earlier trucks had been called Clementine and Emily, and later after we married, he had a truck he called Chia Pet. It wasn’t green or animal like, or anything Chia-like actually. The commercials for Chia Pets just cracked him up and, of course, stuck in the head of everyone who saw them. When he would arrive home before exiting his truck, he would pat the dash and say, “Thanks, Chia Pet!” just like the commercials closed each time.

Yes, admittedly, we can sometimes be silly and, perhaps a bit eccentric in our family. (Life is too serious, so we inject some fun whenever we can.) We don’t name our vehicles any more. (Uh, well, correction … we only name our motorcycles now. LOL We have three and the names come from Black Beauty, which was Son’s absolute favorite story as a child. I bet you can figure them out.) By the way, my vehicles over the years were named The Tank, The Goldsmobile, Green Goddess, and Silver Streak. (The last was an unglamorous, but beloved 4-WD Toyota station wagon, so don’t think I was a speed demon or anything.)

Melissa calls hers a “recovery” smoothie. The pollen has been getting to me a bit and while I do think my adapted version will help me recover, I didn’t want to add another word to the recipe name. Similarly, I didn’t want to include cabbage in my smoothie’s name. For one thing, I don’t think it should get “full billing” as I really don’t taste it in the smoothie. And, that’s not to mention the fact that getting your family to drink smoothies with cabbage in them might be a challenge. Mr. GFE would certainly drink this with the current name, but there would be no way he’d drink it if he knew it contained cabbage. (He thinks cabbage was created to make cole slaw. Period. Cole slaw is his favorite side dish and he loves to put it on top of his barbecue.) But let’s get to the recipe. 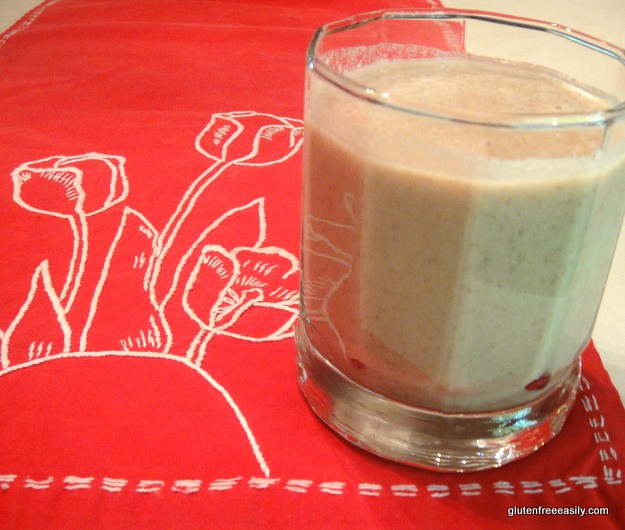 All of Stonyfield products, EXCEPT for their YoBaby Plus Fruit & Cereal, are certified gluten free by GIG’s Gluten-Free Certification Organization. Their products are organic and delicious. (I’m never been a fan of yogurt by itself, but I love using it in smoothies, baking, and sauces, like the avocado dressing I made for fried calamari.) Read labels to ensure gluten-free status of any other yogurt used. For coconut flakes, I used sweetened coconut because that’s what I had on hand. You may wish to add a tiny amount of sweetener like honey, to taste, if you use a unsweetened coconut flakes and/or unsweetened yogurt. If you use plain yogurt, but still want the chocolate flavoring, add 1 ½ to 2 tablespoons of cocoa. Note that having all of the ingredients already chilled will produce a tastier smoothie. Alternatively, you could add a couple of ice cubes and slightly less water. I haven’t made a bad smoothie yet, so be adventurous if you don’t have quite the same ingredients. If one sample taste is unpleasing, add a bit of something else until you like your concoction. Final note … of course, my all-time favorite smoothies for getting in the most nutrition—while sacrificing nothing in taste—are Green Smoothies. I will forever be grateful to Tom and Ali of Nourishing Meals (and their Whole Life Nutrition Kitchen Cookbook) for their awesome recipe.

Drink up and be sure to check out the complete Go Ahead Honey! breakfast in bed roundup at Naomi’s site at the end of this month!

« How Hard Is It To Live Gluten Free? A Short, Sad Story
Sweet Milk Banana Muffins »