May is going to be one very exciting month around the gluten-free blogosphere and, likewise, here at gfe! Especially when you’re looking at this gluten-free Oatmeal Brulee, right? Divine gluten-free recipes aside, most of us with celiac or gluten intolerance know that May is the primary month that has been set aside for Celiac Awareness Month.

According to the National Foundation for Celiac Awareness, at the time of this post, of the 3 million people who have celiac disease, 95% remain undiagnosed. That’s 2.8 million folks who don’t yet know they have a life-threatening disease. There’s no doubt that seems like a large number, but, I know it’s really hard to visualize/put a face on those numbers. And, despite that figure, almost everyone still thinks that celiac is relatively uncommon—except those diagnosed with celiac and/or those involved with celiac/gluten intolerance education, who know differently. 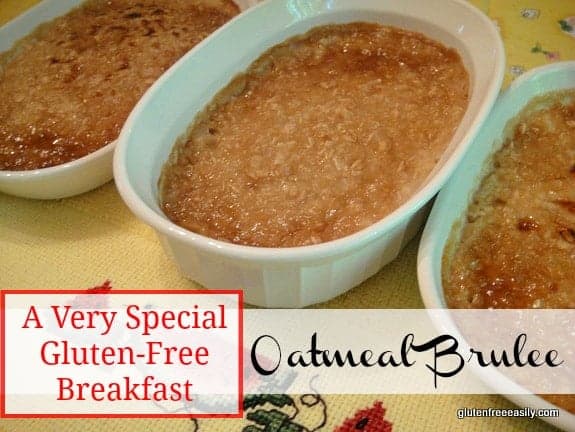 It’s the University of Chicago Celiac Disease Center’s (UCCDC’s) fact sheets (PDF file) that truly put these numbers in perspective. Here’s some data on the number of individuals affected by other, much better-known diseases/conditions to give you an idea just how common celiac disease is: 2.7 million have epilepsy, 2.1 million have rheumatoid arthritis, lupus affects 1.5 million, 400, 000 have been diagnosed with multiple sclerosis, and 30,000 have cystic fibrosis. So there are fewer cases of all those illnesses than there are of celiac.

Need some visuals? To transport everyone in the U.S. with celiac, it would take 4,400 Boeing 747 airplanes or 936 cruise ships. (Please read more on the facts and figures of celiac in the UCCDC fact sheets.) We need to do everything we can to ensure that folks who have celiac get diagnosed.

Having the month recognized by Congress will do much to spread awareness. This bill has been introduced every year since 2006, but has not yet passed. In addition to establishing May as National Celiac Awareness Month and raising overall awareness about celiac disease, the bill would also establish the need for increased Federal funding for celiac disease research, as well as ensure access to nutritional counseling for patients with celiac disease, standardized testing and criteria for diagnosis of celiac disease, and a standardized definition of a gluten-free diet. All of those are needed greatly. Update:  I’m not sure that National Celiac Awareness Month was ever officially approved by Congress, but it is officially recognized by several states and celebrated across the U.S. in May.

To commemorate this month and spread awareness on both celiac and non-celiac gluten issues, here at gfe, I’ll be featuring several notable guests and sharing some discussion posts (and more info) of my own.

Have you been following the Jamie Oliver inspired 30 Days to a Food Revolution event over at Diane’s? There will be 30 days of guest posts from bloggers all promoting cooking and eating real food. Last week, five bloggers weighed in. I kicked off the event with a post on “instant food” and pointers on how to make your own instant food, plus a recipe for Garlic Lime Chicken (courtesy of Leanne Ely)—all right here. The rest of the week featured Kelly of The Spunky Coconut,  Linda of Gluten-Free Homemaker, and Beth of Delectably Free.

I’m so looking forward to all the posts in this series. Hey, I admit I was even a bit disappointed when I realized there wouldn’t be any new posts on the weekends. LOL There’s really some inspiring stuff in these posts; they make for great reading and advice. And, the real food focus is exactly what the gfe concept is all about.

This month’s roundup for the Go Ahead Honey, It’s Gluten Free! blog carnival is up over at Naomi’s Straight Into Bed Cakefree and Dried (update:  this site is now private). The theme is Breakfast in Bed. Naomi has created a pajama party scenario—such fun while enjoying fabulous recipes. Don your PJs and join in here!

Now for that gluten-free Oatmeal Brulee … When I ate brunch at Posana Café recently, one of the most intriguing items on the menu was Oatmeal Brulee. Brulee? Did someone say Brulee? I’m a fan of that other brulee,  Crème Brulee, from way back. It was like one of life’s little miracles when I went gluten free and discovered that Crème Brulee was on my “yes” list.

Of course, as I shared in my review of Posana Cafe, the Crab Benedict won out over the Oatmeal Brulee that particular Sunday morning. I didn’t regret that decision one bit (the Crab Benedict was stellar!), but that oatmeal brulee has been in the back of my mind ever since. It sounded so good, but healthy, too.

An online search yielded a recipe on Recipezaar. It had great reviews and seemed easy enough. However, the recipe called for half and half and brown sugar. Since I revealed my own Food Revolution commitment last week and because I was making this Oatmeal Brulee for myself to enjoy, I used full-fat coconut milk instead of half and half. And, instead of brown sugar, I used Demerara sugar.

From my research, it seems that Demerera sugar is still refined, but not as heavily refined as white sugar. And, I was pretty sure either honey or maple syrup would burn too easily and not provide the caramelization needed if I used them as topping. So Demerera seemed like the best choice of sweeteners on hand. 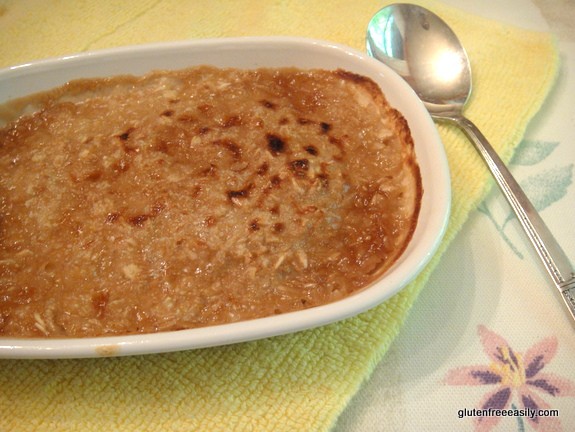 As far as oats, I’ve been trying to gradually increase the amount of oats I’ve been eating to see if I can eventually eat them without any issues. Oats are so beneficial to one’s diet—if one can eat them.  When you’re gluten free and eating oats, be sure that you’re eating certified gluten-free purity protocol oats. It is not enough to eat oats that are certified gluten free.

That’s because many companies that sell “gluten-free” oats or use them in their products, use sorted oats, mechanically separated oats. In theory, gluten grains like wheat, barley, and rye are sorted or separated from the oats and removed via special equipment explicitly designed for that purpose. In reality, there’s no way to remove all those gluten grains by such processing and hot spots of gluten will remain.

The companies that provide truly safe oats today are the exception, not the rule. The most “popular,” most available provider of oats, Bob’s Red Mill, uses sorted oats. In addition, their products are not certified gluten free. They do their own testing.

Here’s a listing of providers of truly safe oats from Gluten Free Watchdog. Even when using such safe oats, it’s important to introduce oats slowly after going gluten free for a while. In small amounts, after you’ve gotten approval from your health care practitioner.

Personally I still only eat purity protocol oats occasionally, but one of the occasions is when I want to enjoy this Oatmeal Brulee. It’s delicious! 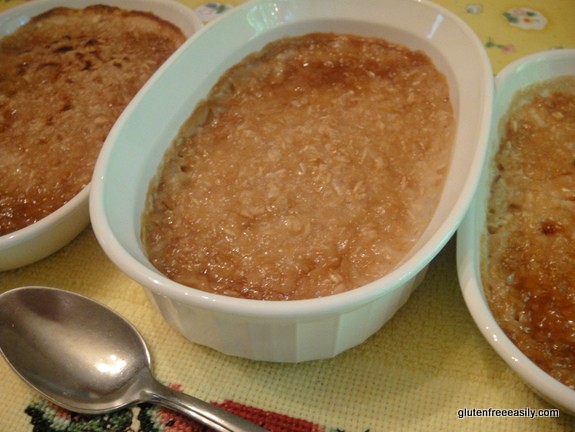 My initial thought with my first bite was that it tasted a lot like rice pudding. It does have a similar texture and flavor—in a good way! If you like your oats, I think you’d really enjoy this gluten-free Oatmeal Brulee for breakfast. 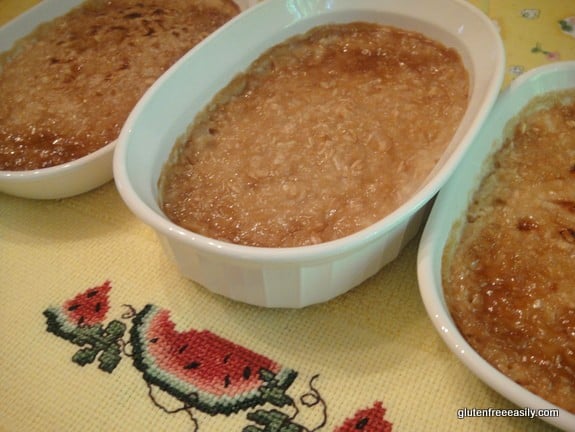 I only had certified gluten-free purity protocol rolled oats on hand (versus quick oats), so I ran mine through the food processor a bit to create a finer consistency and allow them to cook more quickly. They still took longer to cook than the time noted above, probably about 10 minutes in total. Broiling worked fairy well to caramelize the sugar, but I think the classic torch would work better because I was a little timid about getting the dishes too close to the broiler. Therefore, it took a bit longer to caramelize the top.