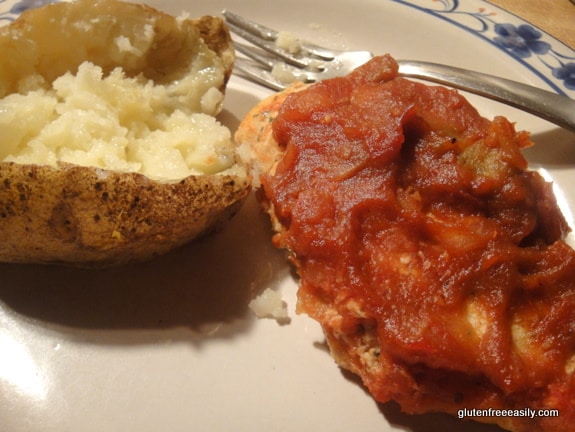 It wouldn’t seem like Pumpkin Butter Salsa Chicken, Michael Ruhlman, and Obsession would have anything in common. But, bear with me and I’ll tell you exactly how they all tie together.

The other day when I shared the Pumpkin Butter recipe for this Pumpkin Pie Plus … series, I mentioned that I thought it would be great for a savory dish with meat. So that evening when I got ready to bake some chicken breasts in wine, garlic, and onions, I decided to add a topping made of pumpkin butter and salsa. This falls into the category of what Erin (Gluten-Free Fitness and Nutrition) calls “not really a recipe.” It can also fit into what Melissa (Gluten Free for Good) calls a “launching pad” recipe. And, Alta (Tasty Eats At Home) actually calls them “un-recipes.” Whatever you choose to call these non-recipes, this dish is just a concept that you can have fun with. Season your chicken as desired and then top with a mixture of pumpkin butter and salsa—made to your taste, with just enough to cover the surface of the chicken—and then bake or grill. The result is a tasty dish (the photo doesn’t do it justice). It’s not fancy by any means, but I wouldn’t hesitate to serve it to guests and personally I could eat it every day. In fact, I did have leftovers for lunch the very next day. Perfect combination of sweetness balanced by tomato-and-pepper-based heat—all providing a lovely depth of flavor.

And, for dessert? I swirled a little Pumpkin Butter with Honey Cinnamon Whipped Cream. That’s about as simple as you can get and makes for an excellent way to hit one’s sweet spot. In fact, this combination tastes very much like pumpkin pie with whipped cream. Can you tell I’m developing an obsession with this pumpkin butter? I’ve already given away all except one jar to help temper my obsession. (But I can always make more.) 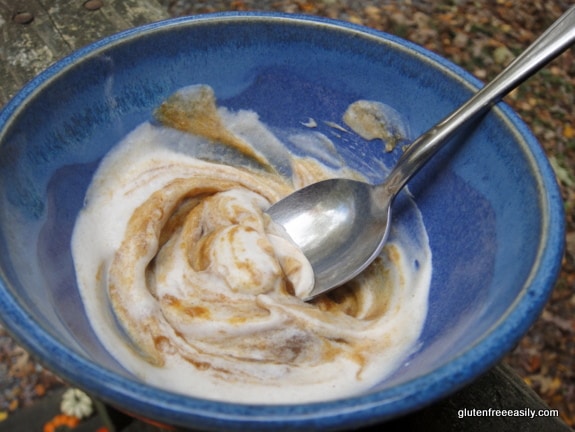 Moving on … now some of you may have heard that Michael Ruhlman was part of the closing panel at BlogHer Food along with Shauna James Ahern (gluten-free girl and the chef) and Molly Wizenberg (Orangette). I had the pleasure of attending BlogHer Food again this year and the conference truly was better than ever. I do plan to do a post on the event … eventually after my traveling the next week or so. But let’s get back to Mr. Ruhlman, who I am going to call Michael from this point forward. Michael also showed us all how to make/cure bacon from pork bellies at the after party. I didn’t catch all of his presentation, but what I did get to see was both entertaining and enlightening. (You can find out how to make your own bacon on Michael’s blog.) 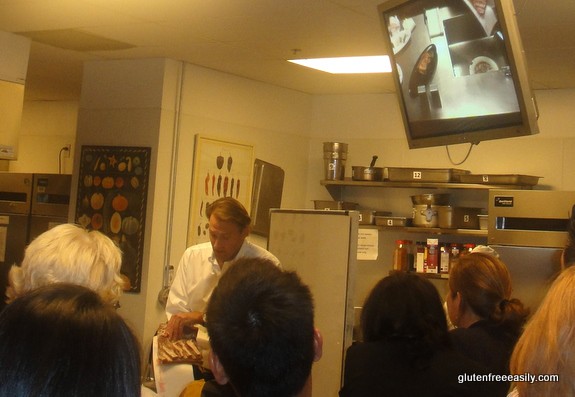 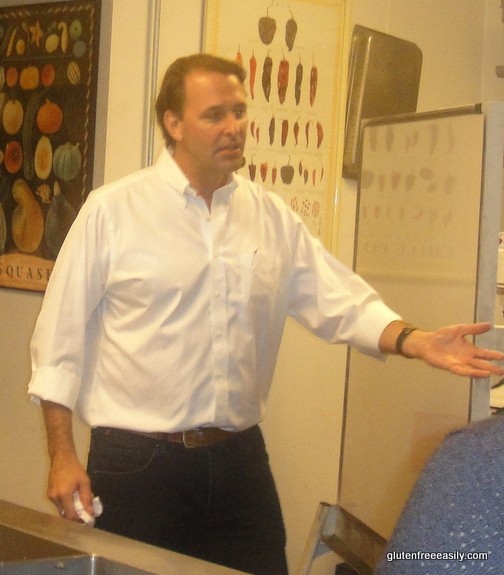 I have to confess that my knowledge of Michael was pretty limited prior to hearing him speak. Yes, I’d heard about his book, Ratio—an anti-cookbook of sorts—and read rave reviews of it and other books of Michael’s on other blogs. His books all sounded good; he sounded good, but I didn’t know enough to be a knowledgeable fan. However, when he spoke in closing, he talked about the importance of getting into the kitchen and cooking, and absolutely not being hung up on a recipe. In fact, he stated that he offers up recipes on his blog only when he doesn’t have other wisdom and musings to share—sort of as a fallback versus a focus. I liked that. (I was quickly becoming a fan, in fact.) Sure, I share recipes constantly and love cookbooks. I read cookbooks, review them, and do giveaways of ones that meet my gfe approach. Some cookbooks that I review and recommend are not gluten free. All contain some gluten-free recipes, but for really all cookbooks, I suggest that folks should use them as a guide or inspiration. I’m also well known for saying, “don’t obsess over this” when it comes to specific steps in gfe recipes. I didn’t really learn how to cook until I was living on my own and stopped obsessing in the kitchen. I stopped following recipes line by line, and unstuck my nose from the cookbooks. Notably, I didn’t start enjoy cooking until I started cooking this way. Yes, baking can be a little different, a little more structured, but even with baking if you are creating in the kitchen, you are using Michael’s Ratio concepts. Those of us who are gluten free (or have other intolerances) tend to do this all the time out of necessity. We just don’t think of it that way. 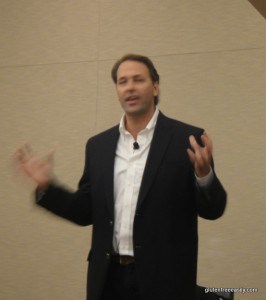 At the end of the interview portion of the keynote speeches at BlogHer Food, Elisa Camahort Page, one of BlogHer’s founders who was conducting the interview, asked Michael if he had anything to add. He bolted upright like a man on fire … one that could not be held back. He offered startlingly impassioned words on how the advent of cooking fundamentally changed man and, conversely, how the demise of cooking has affected mankind. He referenced the book “Catching Fire: How Cooking Made Us Human,” by Harvard anthropologist Richard Wrangham—saying he’d read it many times and highly recommended it.

Diane Cu and Todd Porter, the amazingly talented and dynamic couple who together make up White on Rice, talked to Michael afterwards. They wanted to know more about exactly how this book had impacted him and why he thought it was a “must read.” As he spoke and explained to them, they made the video below, which fully explains Michael’s thoughts on this topic. Michael’s speech and his follow-up talk to Diane and Todd was covered in the LA Times Food Blog. The LA Times cautions: “Warning: There’s a touch of salty language, and this video will make you want to run to your kitchen — or run into someone else’s kitchen.” So if you have just a moment, please stop what you are doing and take time to read the article and watch the video below. I think it will make you look through a different window than you had previously. I won’t say more because you just need to watch it.

And, there’s more … as fate would have it—and truly delightful fate in this case—Michael ended up sitting next to me on the shuttle to the airport as we both headed home. I introduced myself and thanked him for sharing his viewpoints, his bacon curing techniques, and especially his guidance on getting folks in the kitchen to cook without fear—i.e., learning to get the hang of what ingredients work with others and the ratio needed of each. I said, “What’s the worst than can happen, right?” He agreed. Even when I had a disappointing baking day recently, it wasn’t the end of the world. As I shared earlier, I didn’t heed my feelings about the two recipes I made—either my misgivings about the ingredients working together or the ratios of these ingredients. So I took note and moved on.

Most of the time, my play in the kitchen goes really well though. Tonight’s dinner was a slow cooker pot of chili made from leftover ingredients from the refrigerator and a few staples from the pantry—some venison taco meat from dinner a few days ago, a few Portobello mushrooms, a little salsa, chopped onion, black beans, plum tomatoes, beans, chili powder, and, yes, a good dollop of pumpkin butter (the amount leftover from filling the pint-sized canning jars … I was channeling Kim on using this ingredient in chili and feeding my own new “obsession”). We ate this chili for dinner and it was outstanding, but I just knew it would be. The truth is, I’ve never made a bad pot of chili, and I like playing around with the ingredients. I long ago figured out the basics when it comes to chili—a bit of sweet, spicy, acidic, etc.—and just play around with those basics for successful results every time. (The only time I’ve used a recipe for chili is for my vegetarian chili, That Chili with the Mushrooms, because I’d never made a chili with no meat and so many vegetables before. But, of course, I immediately “tweaked” it.) So follow Michael’s advice and get in the kitchen and play (with some minimal guidance in mind). Spread the joy of cooking. Invite friends and family into your home. Oh, and, this from me, just in case you have forgotten, don’t obsess  (well, unless your obsessing over using pumpkin butter … maybe).

Final note: In case, you’re wondering, yes, Michael and I did speak about gluten free living on the shuttle ride to the airport. Michael was specifically interested in what I meant by focusing on “naturally gluten free” foods and dishes. He’s very interested in celiac disease/gluten intolerance and seeing that those who eat gluten free can eat well and safely. Be sure to check out this guest post on gluten-free Fried Chicken from Stephanie Stiavetti (Wasabimon) and his subsequent interview, What I Didn’t Know About Celiac, with Carol Blymire (Alinea At Home). That latter post included Shauna and Danny’s gluten-free pizza recipe, plus there was even a mention of Lauren (Celiac Teen) and me–thanks, Michael!