Since I’m a lover of pretty much all things pumpkin, I have always wondered about Pumpkin Butter, but have never tried it. Until now. I have a new love. Slow cooker pumpkin butter. 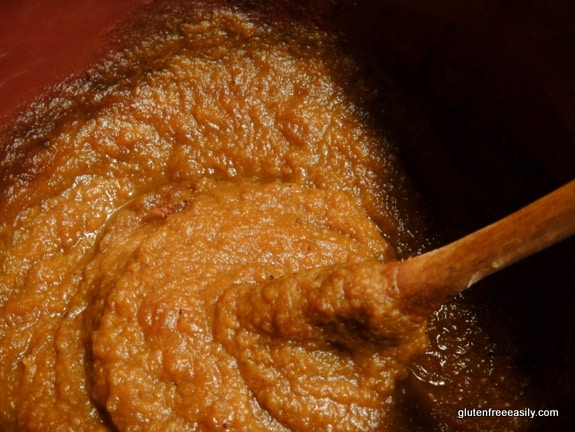 Glorious Pumpkin Butter. Ready To Be Transferred to Jars.

Pumpkin butter is naturally gluten free, of course. Naturally gluten-free foods (and recipes made from them) are my favorites and focusing on them first and foremost is the backbone of my gfe approach.

See my incredibly easy Pumpkin Butter recipe below and then read on to get a bonus pumpkin recipe in today’s post in my Pumpkin Pie Plus … series.

Refrigerated jars of this pumpkin butter make great fall or holiday gifts. (I’m giving a jar to one of my girlfriends today as part of her birthday present.) Giving jars of the refrigerated version as gifts means that you can happily recycle well-cleaned, appropriately sized jars.

A small jar for the newspaper lady (who always puts your newspaper in a bag when it’s raining) or a large jar for Aunt Harriet (who always gets you confused with your sister), or vice versa—you decide. Remember to include instructions on the label or gift tag indicating that the pumpkin butter must be refrigerated right away. 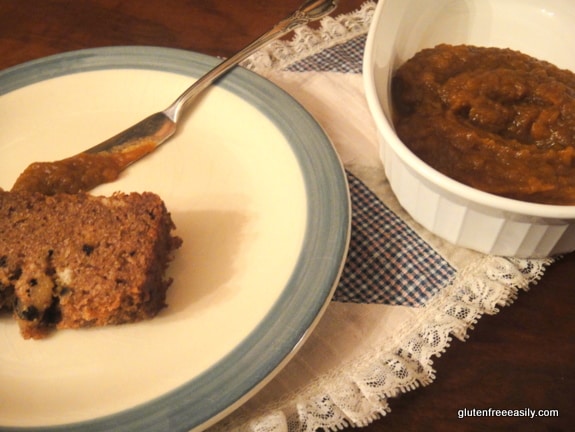 For this recipe, I used my 4-qt crockpot and it was about half full. A bigger crockpot could not be used for this recipe as written—i.e., the same ingredient measurements; the recipe amounts would have to be doubled or tripled. 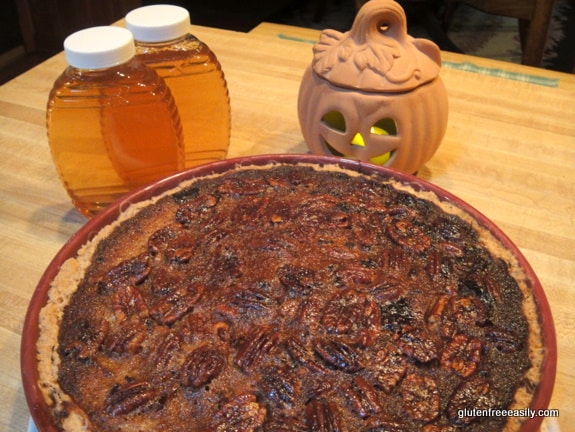 You Say Pumpkin, I Say Cushaw …

What’s that you say? Am I dissing you? No, not at all! Cushaw is a squash, not a put-down expression.

I have to agree with him though. This pie is excellent. It has the delightful pecan factor (without the super syrupy sweetness that many find unappealing in a classic pecan pie) and the cushaw (or pumpkin) goodness that we all love. (We loved it with or without the Honey Cinnamon Whipped Cream that was doing double duty for smoothies and pies this week.)

I think you’ll be impressed by this pie. And not just by the filling. Moi, the queen of flourless and crustless, actually made a crust for this pie.

Okay, I confess it’s my Never-Fail No-Roll Press-In Pie Crust, the kind you mix in the pie plate and then press down with your fingers. Yes. Seriously.

You didn’t think I was going to do a bunch of work chilling dough and using my rolling pin, did you? (You know me better than that, right?) Now go check out my Pumpkin Pecan Pie. 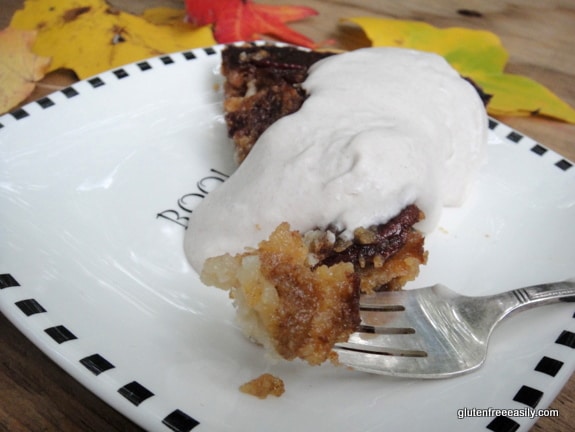 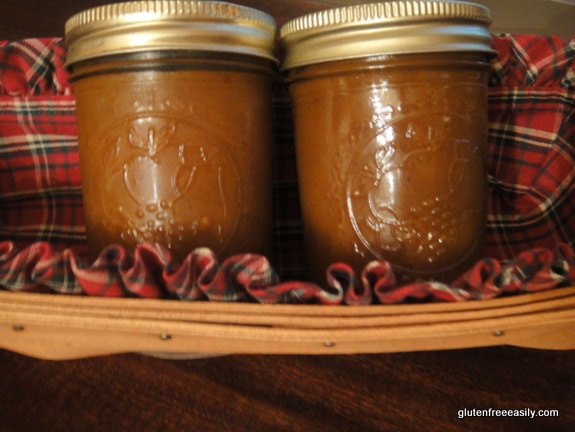 If you're prefer to make on the stove top: Mix ingredients together well in a heavy pot and cook over low heat, stirring constantly. Cook until thick (i.e., the consistency of any fruit butter, like apple butter). Let cool and store in refrigerator.

I'm sure two teaspoons of pumpkin pie spice could be used in place of this recipe in place of the individual spices if necessary.

Honey should never be given to children under 1.

Either maple syrup or agave nectar can be used instead of honey, but both are thinner than honey. Therefore, I recommend using 3/4 cup of maple syrup and about 7/8 cup of agave nectar (no 7/8 cup measure is needed; just use a one-cup measure and use fill it slightly less than full).

I cooked my pumpkin butter for 6 hours in the slow cooker and then an additional 2 hours just because I wanted it super thick. I left the lid off for the last half hour of cooking so extra liquid could evaporate. (I've read that as long as you are cooking on low in a slow cooker that's working properly, you almost can't overcook pumpkin butter.)

Note that canning pumpkin butter (or any mashed/pureed winter squash) is not considered safe.

Because the raw honey acts as a natural preservative, this pumpkin butter will keep for up to 6 months in the refrigerator. Let me know if yours lasts long enough to test that out. I know ours won’t.

I plan to use mine on bread, like the Classic Pumpkin Bread from yesterday’s post, as well as for savory dishes. Need to jazz up a chicken breast? No problem. Spread some pumpkin butter on it the last few minutes of cooking or right out of the oven or off the grill. How about a pork tenderloin made with pumpkin butter? That might make me push my Pork Tenderloin with Maple Glaze to the side, or perhaps I can just substitute pumpkin butter every time maple syrup is called for in the recipe. Now that’s an idea!