Today I’m sharing my Gluten-Free Never-Fail No-Roll Press-In Pie Crust. Or you could just call it the Easiest Gluten-Free Pie Crust Ever if you prefer!

It’s week 2 of A Gluten-Free Holiday and the theme is Thanksgiving Favorites— from beverages, appetizers, soups, salads, entrees, and side dishes, to luscious desserts. In the dessert category, can you think of Thanksgiving without thinking of pie? 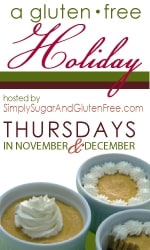 We sure can’t in my family … we LOVE pies! Mr. GFE is always singing “P.I.E. spells pie, pie,” when the holidays roll around, or just about any time pie makes its appearance.

Like I said, we love pies … even enough to sing about them. But what about pie crusts after one goes gluten free? How does one deal with them?

Well, I’ve shared before what a life-changing moment it was when I found out that I could add ¼ cup of gluten-free flour mix to just about any pie recipe to make it crustless. The beauty of crustless pies is that not only are they easy, but nobody eating them ever misses the crust.

If you don’t tell them, there’s no crust, they don’t notice. These pies just sort of stand on their own merit—yes, pun intended.

My Easy Crustless Pecan Pie is the most popular post here at gfe, followed by my Best Gluten-Free Pumpkin Pie Ever and my Crustless Coconut Pie. Next up is my Easy, Crustless Apple Pie. (which uses a slightly different method) and then Crustless Sweet Potato Pie and my original Crustless Pumpkin Pie.

Sometimes though we want a crust for our pies. Yes, you can run to Whole Foods or another gluten-free friendly grocery store and buy a prepared gluten-free pie crust, but what’s the fun in that?

Plus, you lose control over what’s actually in your pie crust. Gluten free, yes, but maybe there are some other ingredients you don’t want or are intolerant to. I didn’t use such prepared crusts before I went gluten free, why would I want to now? 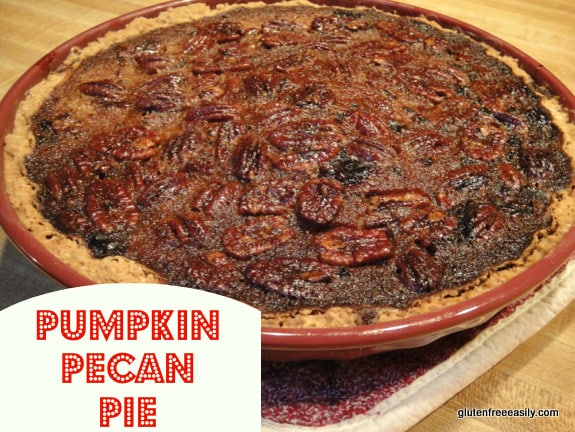 This pie crust is gluten free, dairy free, egg free, vegan, soy free, nut free, and even rice free if you use a gluten-free flour mix that does not contain rice. Note that it is a bit different from a traditional rolled pie crust in taste and texture.

I’ll tell you though that nobody who has eaten pies with my press-in crust has ever disliked them. Furthermore, while Mr. GFE and Son would always leave those traditional pie crusts on their plates, they would eat every morsel of this pie crust … and still do, even though it’s gluten free.

This gluten-free pie crust It just has that crunchy crumb-type appeal, and I tell you that in full disclosure. I know that not everyone likes crumbs. Personally, we find these pie crust crumbs to be a good thing, but if you are looking for that “perfect rolled pie crust look,” this won’t be the crust for you. 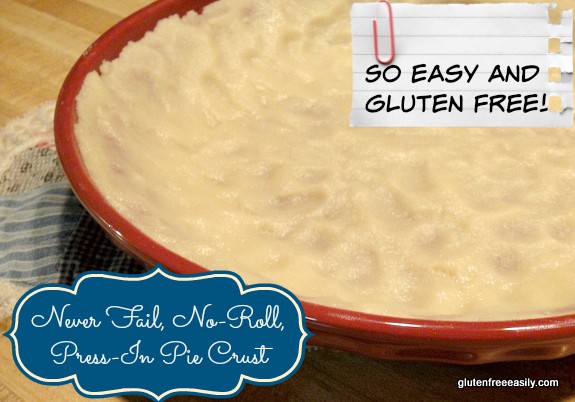 Let me tell you more about this gluten-free Never-Fail No-Roll Press-In Pie Crust. You sift the flour mix and mix most of the ingredients right into your pie plate/pan.

Then as the directions indicate below, you use your hands to pat and press in the pie crust right there, as you like. Then you fill as usual. You can’t mess this pie crust up, no matter how hard you try. Seriously.

Don’t you love it? This method and recipe is gfe for sure!

Do you need more recipe ideas for Thanksgiving? Check out my post on Thanksgiving—The GFE Way. 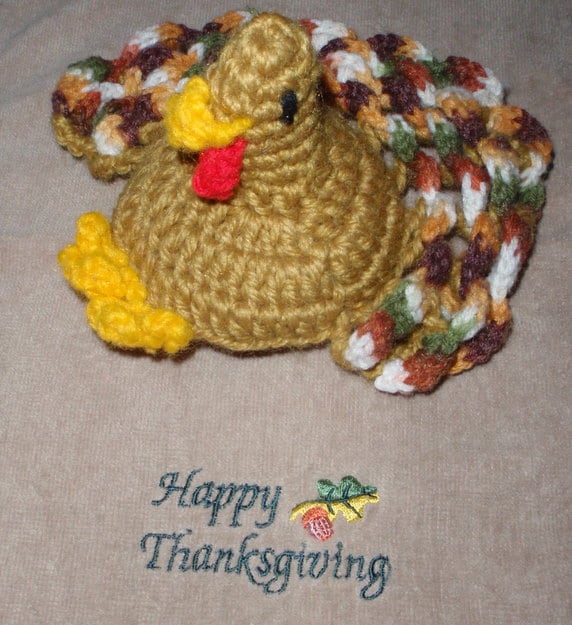 There are ideas for salads (one even non-salad eaters will love), main dishes (turkey breasts made in the slow cooker—traditional and special), side dishes (including stuffing made using tortilla chips—super easy!), more desserts, and even delicious breakfast ideas (casserole, volcano pancake, or scrumptious muffins—you choose) for your overnight guests.

Want to add a seasonal soup or serve that instead of a salad? This pumpkin soup might be just the thing you are looking for.

Looking for a special ice cream to serve with those pies? Perhaps you want one that will impress, but not bog down your already busy schedule.

Make this non-cooked gluten-free, dairy-free, refined sugar-free, egg-free Honey Cinnamon Grand Marnier ice cream a few days in advance and have it ready to pull out of the freezer right before the pies are served. (It’s made with honey and a little alcohol, so it stays “scoopable.”) Your guest will be both delighted and impressed. My guests sure were last Thanksgiving.

Are you new to gluten-free living and/or still concerned about eating safely at group gatherings? You’ll want to read my 5 Tips for a Safe Gluten-Free Thanksgiving (or Group Event) as well as my gfe readers’ comments on this post.

Plan ahead for Thanksgiving leftovers, too. Are you “over” the stuffing by Day 2 or 3? Turn your stuffing into croutons. This method is the easiest way to make gluten-free croutons ever.

Do you know you’ll have turkey left over and want a specific way to use it rather than winging it? How about making Turkey Tortilla Soup or Turkey Pot Pie? (Both recipes are gluten free, dairy free, and more.)

Still have a holiday quandary, check out my Recipes and/or post your question on my gfe Facebook page where you’ll be able to get not just my input, but other experienced gluten-free folks’ opinions as well.

Is it the schedule that gets to you when hosting Thanksgiving? Kim (Cook IT Allergy Free) walks you through the big day and the days before, step by step, in her Ultimate Thanksgiving Prep Series.

Updates: Here are two of the gfe reader reviews that have come in:

I’ve actually made a “new and improved” version of this pie crust that uses almond flour in addition to the gluten-free flour mix. It’s a great recipe but you can’t go wrong with either of these recipes if you’re looking for an easy and delicious pie crust recipe—especially one that you don’t have to roll out!

There are no baking times shown because this pie crust is designed to be baked with a filling. Therefore, you will follow the baking time for whatever pie you are baking. I don't recommend blind baking this crust; i.e., baking it without a filling.

I have used many different combinations of flours successfully. There will be slight variations in flavor and texture with each. For example, when I used my Two-Ingredient Gluten-Free Flour Mix and ½ cup of almond flour (which, of course, made the recipes unsafe for those with nut issues), I thought the crust was a little more crumbly. However, it was still fine for us and I thought it tasted especially good.

I rarely use xanthan gum in this recipe, but it will make your crust bind a tad better and, therefore, a little less crumbly.

Sometimes the salt stands out in the flavor of the crust, but it provides a nice contrast to sweet fillings or a complementary one to savory fillings. If necessary, you can reduce the amount of salt a bit.

Be sure to check out the Pumpkin Pecan Pie recipe.