I’ve been making this Cheesy Chicken Zucchini Bake a lot lately. Doesn’t it look delicious? It’s my main dish version of the side/vegetarian dish that Ali of Nourishing Meals made a while back.

When I saw her recipe for Zucchini Bake, with almond flour and olive oil combined for a ricotta-type taste, I decided to make it for our subsequent support group meeting. Everyone loved it—whether dairy free or not. 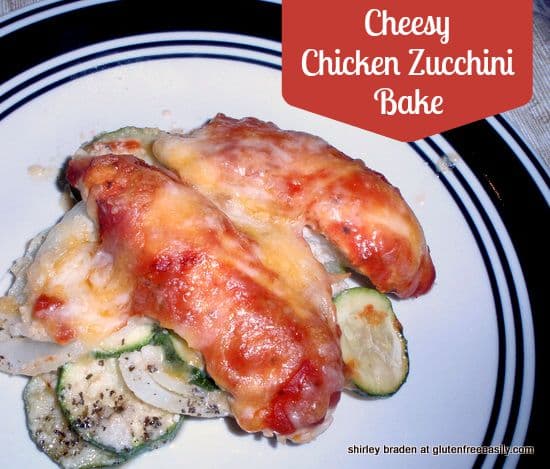 A few nights later, dinnertime was approaching and I had no idea what I was going to cook. Yep, that’s right … I don’t always plan my dinners.

I looked in the freezer for any meat or fish item that I could cook quickly. I pulled out some chicken tenderloins—basically boneless chicken breasts cut into smaller slivers for quicker cooking. I really had no idea how I’d prepare them at the time.

Then the refrigerator yielded the following items that seemed like the makings of a dinner: a few zucchini left from my purchase to make Ali’s recipe, a little pizza sauce left in a jar from making Flourless Pizza, and some grated cheese that remained from making tacos. There were more onions in the pantry as well, of course.

Suddenly, the idea for this casserole dish was born. Mr. GFE was only slightly surprised that I’d pulled a rabbit out of the hat, so to speak.

The man is spoiled. He’s come to expect great things from me when I just throw some things together. (Most of the time that works out …)

When Son came home from college recently to pick up some items, we were both at work. He found the last of the Cheesy Chicken Zucchini Bake leftovers. He called me at work and started talking animatedly about the dish.

I wasn’t sure at first if he liked it or hated it. He was using some of his generation’s lingo, which made no sense to me. Oh, no, I thought. There were onions in the dish and he doesn’t really like onions.

I hesitantly asked for a translation on his terms, i.e., if he liked it, and he replied, “It’s awesome, Mom.” He added, “You know how much I love zucchini.”

He added that he didn’t mind the onions, because the combination of flavors tasted so good and the onion flavor was “not too strong.” Success! 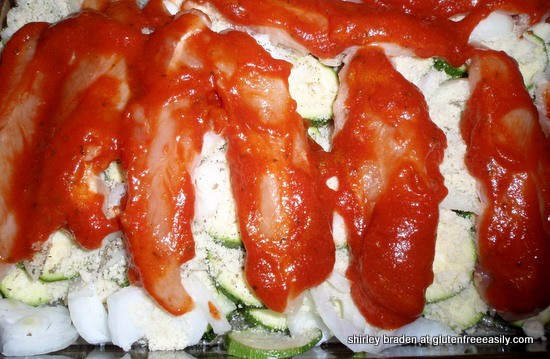 Be creative and use what you have on hand. Note that while it looks like I used a whole lot of cheese as topping, I actually used very little.

If you add the cheese to any dish towards the end of the cooking time, you can use a lot less and it will still be soft and delicate, so to speak.

If you decide to top the chicken with a little more almond flour versus cheese for a dairy-free version, you may want to place the dish under the broiler a minute or two to ensure adequate browning. 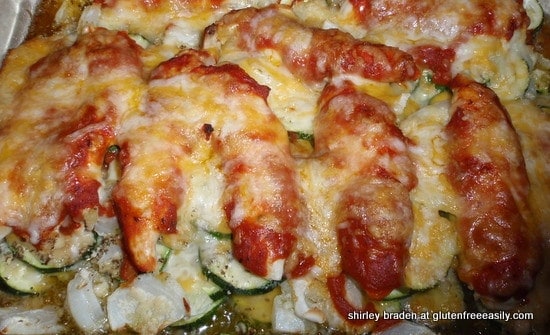 Now your dinner is complete … all in one dish. Savor!