We’ve all heard raves about Beer Can Chicken, right? Well, today I’m going to tell you how to make Gluten-Free Beer Can Chicken. Spoiler alert: It’s amazingly delicious! And easy to make! 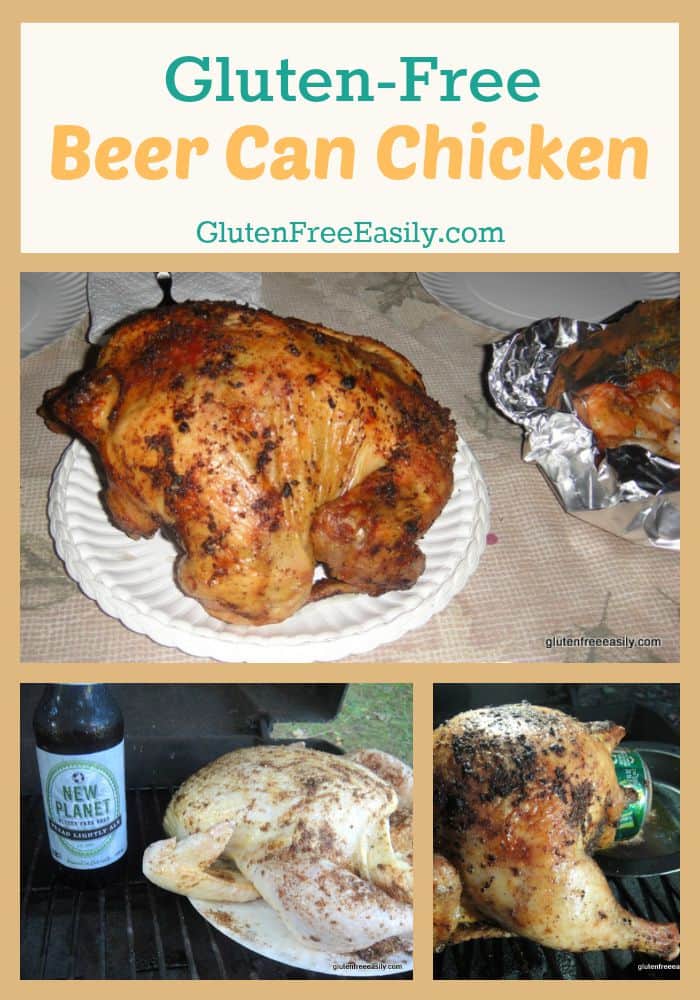 The Back Story on This Gluten-Free Beer Can Chicken

A few days before my birthday, Son called and said he wanted to come camping with us on our mountain property, and bring a couple of friends. We said sure! We never turn down a chance to be with Son and it’s fun to hang out with the younger crowd for the weekend. We knew we’d be playing camp staff (cook, counselor, canoe/kayak livery, etc.), but we didn’t mind. The best birthdays are spent with loved ones, right? And, you know we love our mountain property. Just driving there one starts to relax. 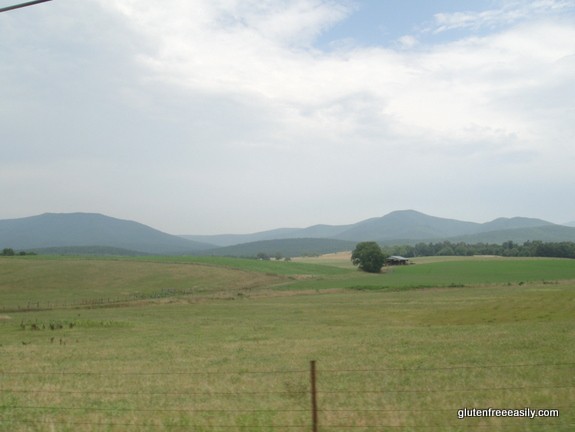 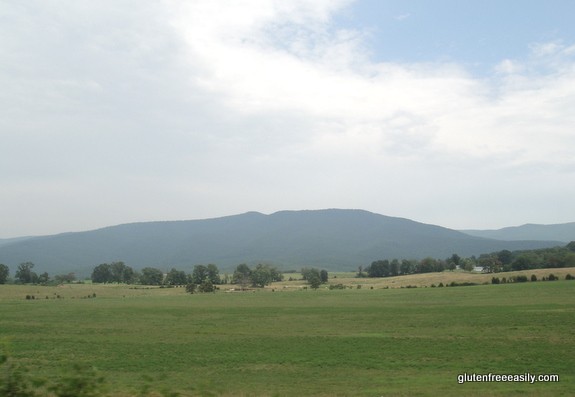 So I started planning the menu, other than the appetizer. I knew Son would take care of that. He loves to catch crawdads … and we love to eat them. This trip was no different. 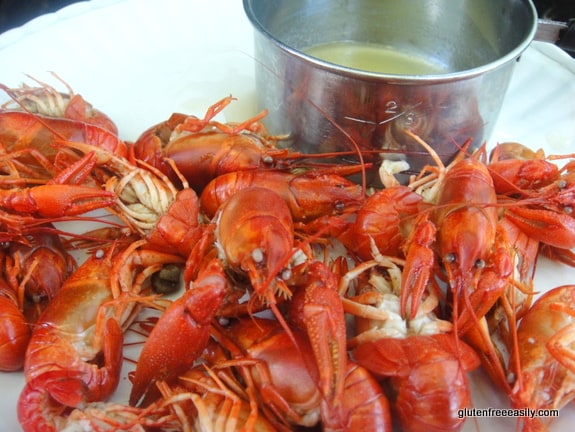 I thought about the cookies I’d need to bake. Last time, Son and four of his friends had gone through 8 dozen cookies, and that was just in the first few hours. This time he was just bringing two friends, but still, a mom has to be prepared. So I made a batch of Brown Sugar Chocolate Chip Cookies (using my new coconut sugar variation) and Flourless Peanut Butter Cookies—about 6 dozen cookies in all. 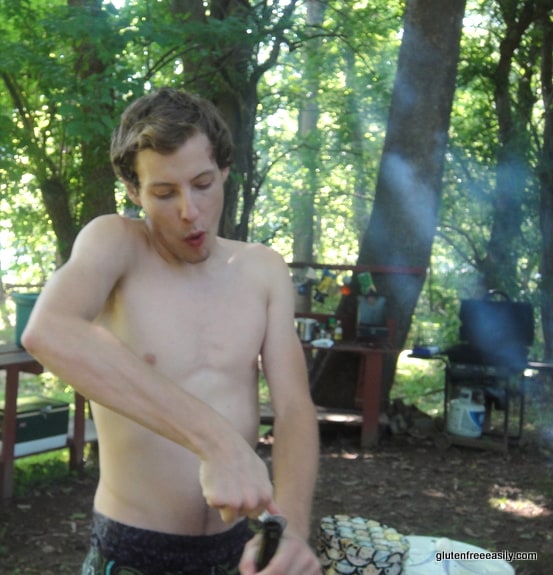 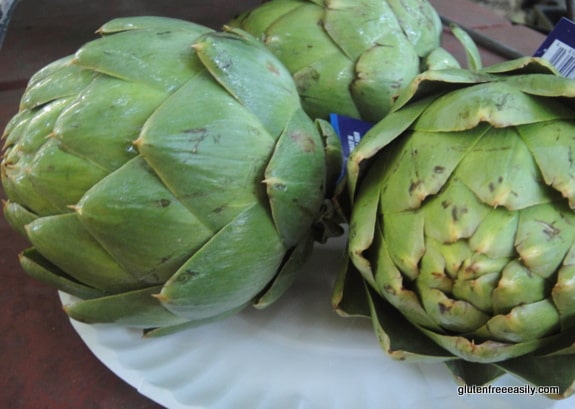 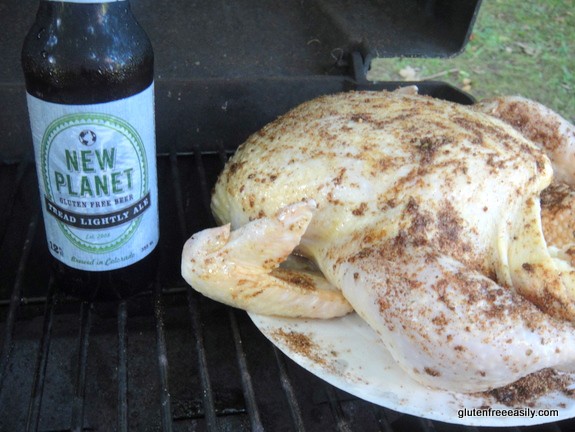 I proceeded to prepare and roast the chicken using a combination of several ideas I’d read online. I washed it, oiled it, applied a rub (using the blackened seasoning adapted from Ashlie (Edible Existence) that I first used on my Blackened Black Bean Burgers and later on grilled catfish), inserted the gluten-free beer in a can in its cavity, and roasted for a little over an hour. See step-by-step directions below, but this chicken was so easy to roast and the results were surprisingly delicious. Although I’d never had beer can chicken before going gluten free, it really is as super moist and flavorful as is reported. Note that the final product doesn’t really taste like beer in any way—at least not per our experience. (If you don’t drink beer, you can certainly use another beverage, like ginger ale for the steaming/moisturizing effect.) There’s little fat left after roasting, since the fat drains away as the chicken roasts. (The following photos were taken after dark and required either flashlight assistance from Mr. GFE or the forbidden flash. You can see my fat bird took a tumble towards the end.) 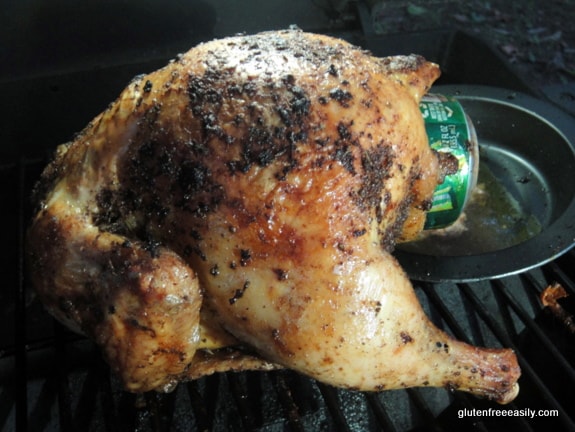 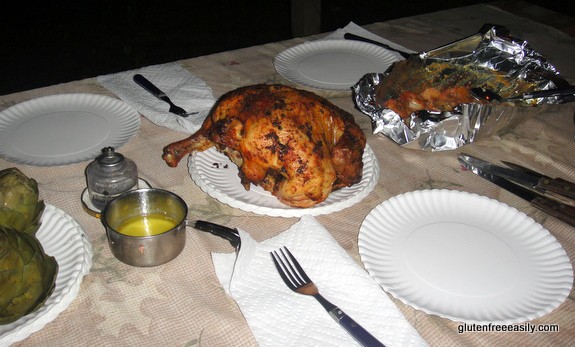 Beer Can Chicken is definitely going on our meal rotation. For camping, we’ll only make it when we have a larger group because one chicken goes a long way and cooler space is always a concern, but at home, I anticipate roasting one, saving some leftovers, and freezing a good portion for a later meal. We ate some of the leftover chicken once we returned home, I used some to make chicken salad, and a very meaty carcass went into the freezer for a future soup (like Black-Eyed Pea with Ham and Chicken) or Chicken (or Vegan) Pot Pie. With our current heat wave (understatement!), any winning grill recipe is extremely welcome right now. 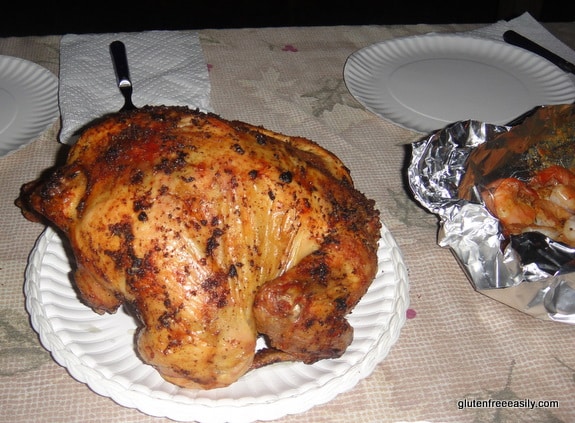 Here’s the recipe, but be sure to scroll down to read more about my wonderful birthday camping trip and what’s going on in the gluten-free community right now!

If you’re a fussy type, you can buy a beer can chicken apparatus like this one. I didn’t have one, but I did use the base of my chicken roaster pan (basically a large metal saucer) to set the can in and position my chicken over. My top-heavy chicken did turn over half way through cooking, but it didn’t make any difference. It still roasted perfectly and looked great. But, again, if you’re the fussy type, you might want one of the beer can chicken holders. I’ve made a big batch of the blackened seasoning rub and keep it in our camping food box. It’s great for grilled catfish, zippy burgers, and more. Some folks like to insert a whole potato or onion in the neck of the chicken. The latter provides a strong onion flavor, I’m told. Either the potato or the onion can be eaten with the roasted chicken when all is finished cooking. I didn’t do that and I think it would have made my chicken even more top heavy, but it is an option. Last, be sure to follow the caution note above when removing the can from the chicken after roasting. Update: Be sure to read all of Nance’s great variations in comments below!

As you can see from the photos, we also enjoyed some Oven-Steamed Shrimp. So we had a great “surf and turf” meal.

It was the first time eating artichokes for one of Son’s friends. It’s always fun to introduce new folks to the joys of artichokes. Both Son and his other friend were very encouraging, but I think the friend who was new to artichokes was still unsure even after a few bites. If you don’t grow up eating them, artichokes can take some time to “grow on” one.

I’d thought about making a batch of Crab Claws (ultimate summer cocktail) for the cooler … it was my birthday after all, and these young men (of drinking age) certainly enjoy libations. Plus, there would be no driving. But, I’d never gotten around to purchasing all the ingredients. In the end, it turned out to be a good thing that I hadn’t partaken of any spirits. One of Son’s friends had an allergic reaction that had started once he arrived on his motorcycle and I ended up driving us all to the emergency room. Thankfully, Son’s friend was okay after he was treated! To show you how quiet the area is where our property is located, there was not another soul waiting in the emergency room when we arrived and our entire round trip, including the visit, took all of 40 minutes. 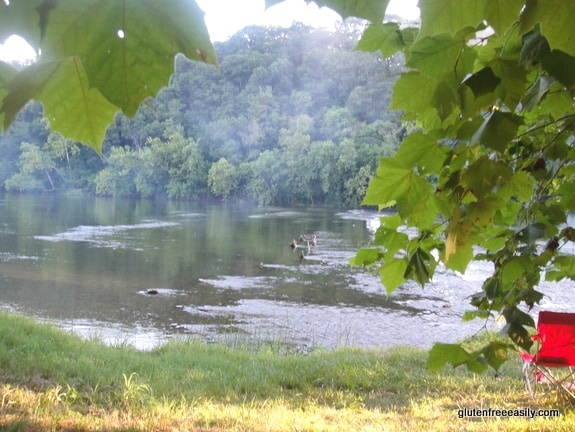 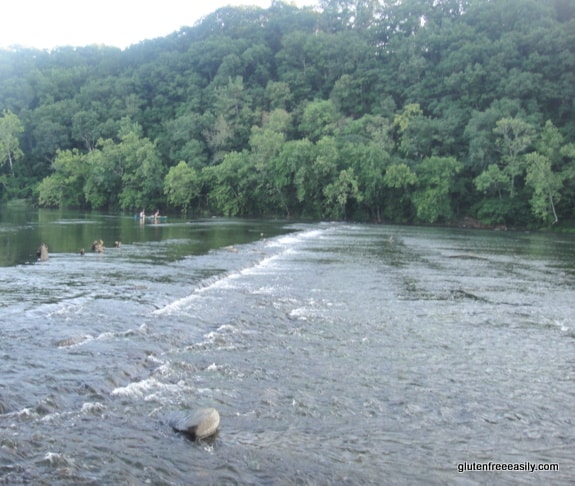 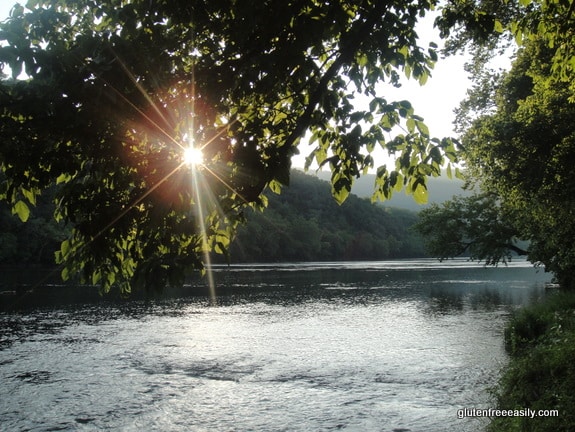 The weekend weather was hot, but it was still sunny and fairly clear (it’s always less humid in the mountains) as you can see from the photos. (Any haze is actually smoke from our campfire.) Of course, the high temps were perfect for swimming and relaxing. We still had our fire and the temperature dropped enough at night that we slept under blankets. Son and friends used most of the cookies that remained after dinner to make gluten-free S’mores using the ginormous Campfire marshmallows that are now on the market. Have you seen them? Notice that they say “gluten-free” right on the bag! Hold your fingers apart like Son is doing in the photo and you’ll see how big these marshmallows really are. Wow, huh? Of course, homemade marshmallows are healthier. I haven’t made any yet, but Zoe (Z’s Cup of Tea) has. (Check our her homemade version here and here using two different sweeteners. No artificial dyes or corn syrup to worry about with Zoe’s gorgeous marshmallows.) 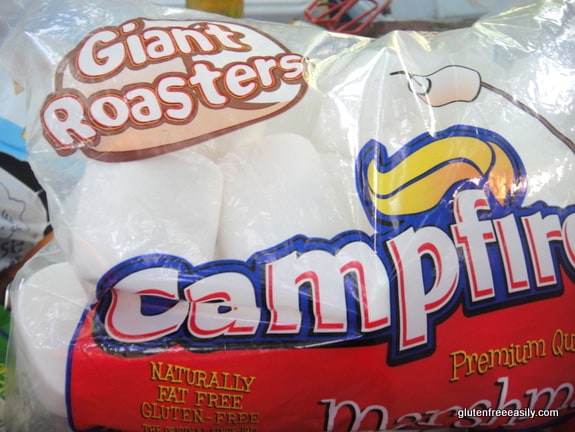 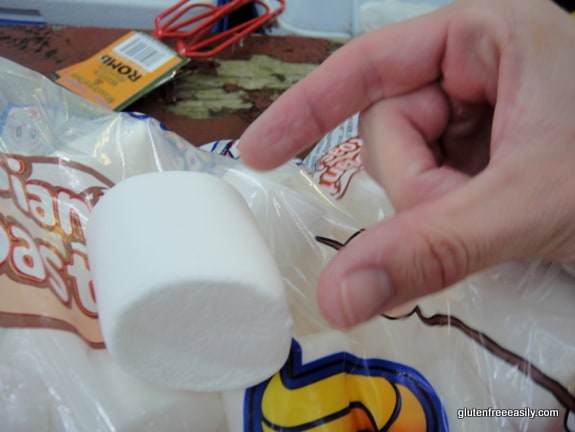 Other meals included lunch with the easy classic of grilled hot dogs with chips on the side and fend-for-your-own breakfast. Oh, and while none of the guys were willing to go so far as to sing Happy Birthday to me, I did receive lots of birthday wishes and even hugs. So this Mom was very much a happy camper!

Just a few other “goings on” this week:

Last week I shared Chocolate Zucchini Bread to help you all with your glut of the prolific green veggie. Well, I just saw another ingenious and tasty way to use zucchini—zucchini crisps! Get out your dehydrator or fire up your oven to low (still feasible for some of you in cooler climes!), because you’ll want to try this recipe. And, even if you’re not interested in zucchini crisps, I still recommend checking out the article because it talks about all the benefits of dehydrating part of one’s summer harvest. It even includes a review of a very economical dehydrator.

Continuing on in the gluten-free cooking arena, Kim (Cook IT Allergy Free) posted some great tips on avoiding baking mishaps in the gluten-free kitchen. I chimed in with some things that have helped me, and you, can, too. Kim is looking for your input in comments. Her tips post is a great one to save (or better yet print out and place inside your kitchen cabinet door near your stove). We all tend to get into baking habits, some good … some bad, but as we know making a change and then repeating it creates a new habit. Here’s to more successful baking for all. Thanks, Kim!

Maggie (She Let Them Eat Cake) has a great discussion post up: Feeding Gluten-Free Kids. She shares the tips that work for her family. I’m sure you’ll find some that will help you and your family as well. 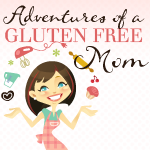 Heidi (Adventures of Gluten-Free Mom) shared two outstanding posts this past week. I had recently touched on my ob/gyn issues caused by gluten. Heidi read, commented, and took the ball and ran with it, addressing those issues as well as many symptoms considered atypical. Read her article with numerous sources cited and watch the two videos that she included—one of Alice Bast, the founder and head of the National Foundation for Celiac Awareness (NFCA) (now Beyond Celiac) and the other of Heidi Collins, the CNN anchor and spokesperson for the NFCA.

Alice Bast’s story is both heartbreaking and inspiring, and Heidi Collins “went down the rabbit hole” of misdiagnosis for many years, too. (Actually, I think all too many of us took a trip down that rabbit hole. That Lewis Carroll expression from Alice in Wonderland was aptly used by Dr. Scot Lewey, gastroenterologist and digestive disease specialist, in the title of this article on celiac.com.)

Heidi also shared her son’s recent results with Enterolab testing and her subsequent discussion with Dr. Ron Hoggan. You’ll want to read Heidi’s entire post (particularly, the effect that casein can have on one’s small intestine). But, here’s just one of the news flashes she shares: Dr. Hoggan’s new book, which he co-wrote with Scott Adams (founder of Celiac.com), has been released. Cereal Killers: Celiac Disease and Gluten Free A to Z has a compelling title and I’m sure it’s full of eye-opening information. Dr. Hoggan’s books always offer some of the most thought-provoking information on celiac and non-gluten issues, as well as the many conditions related to them.

Okay, better let you go so you can see if you have a roasting chicken in the freezer and some gluten-free beer in the refrigerator. Hopefully, this delicious Gluten-Free Beer Can Chicken will be on the menu for you!