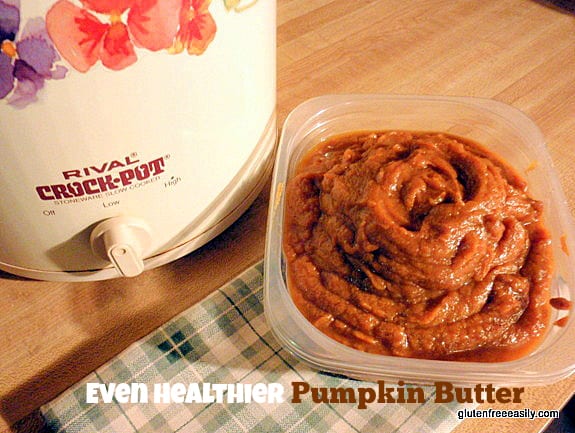 When I made my slow cooker Pumpkin Butter for the first time this season, I had ripe pears on the counter and wondered if pears—and/or apples–could be used totally eliminating the need for an added sweetener. I was mixing up my Pumpkin Butter to slow cook while I slept so I was getting ready to turn in for the night and didn’t do any experimenting then. But I finally got a chance to play around with that idea recently and was pleased with the results. The only down side is that I am sensitive to weird textures and noticed the “seeds” from the pears in the pumpkin butter if I ate it spread on bread.

It turns out that the “seedy,” sometimes gritty taste of pears comes from stone cells, not seeds. The Fruit Guys Almanac discusses the matter:  “Have you noticed that pears can sometimes have a gritty texture compared to apples?  This comes from stone cells, which develop in pears as they ripen on the tree.  Stone cells have very thick cell membranes with very little space inside and are one of the reasons pears do not ripen well on the tree.  They are protective for the fruit, but not necessarily what humans want, so pears are picked when mature, but not ripe, to avoid excess stone cells.”

I picked up my pears from the grocery store and don’t even remember what kind they were and I’m guessing that letting them ripen quite a bit more on the counter did not help with the development of stone cells. Hmmm. Pear experts, please weigh in. 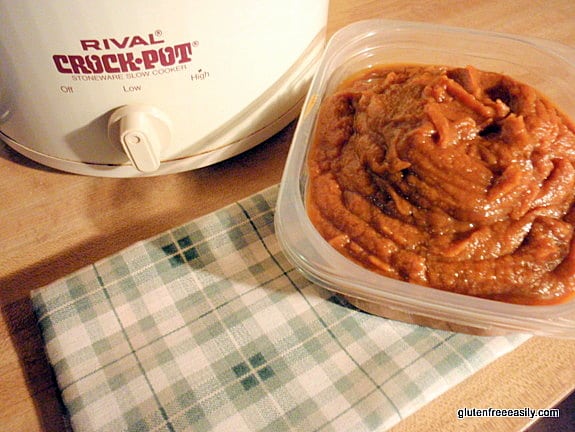 With the addition of naturally sweet ripe pears and a ripe apple, I was able to reduce the honey from a full cup to 1/3 cup. Of course, a slightly lesser amount of maple syrup or agave nectar can also be used in this recipe to make it vegan. (I recommend using slightly less of either because I find them both to be thinner than honey.)

You can substitute 3 to 3 ½ teaspoons of pumpkin pie spice for the individual spices, "in a pinch" or if you prefer. Subbing pumpkin pie spice for part of the spices (allspice, cloves, ginger, and nutmeg) in addition to cinnamon is also an option. You can use a sweeter apple, like Golden Delicious or Pink Lady, or perhaps even use more apples than pears, or all apples. Adjust honey (or other sweetener) as needed when altering the ratio of fruit and to personal preferences. Slow cooking will deepen the flavors, but it won’t necessarily make your pumpkin butter sweeter so being happy with the sweetness before adding your mixture to the slow cooker is important.Slow cookers can vary in temperatures and required cooking time. You might need to slow cook your pumpkin butter more or less. Pay attention to that final cooking time the first time you make this recipe and note it on the recipe so you won't have to keep checking your pumpkin butter when you make it in the future.Because of the lower amount of sugar in this recipe (honey in this case), this pumpkin butter will not keep as long as my other slower cooker pumpkin butter recipe does or at least keep its same sweet flavor. The fruit turns fairly tart after a while.