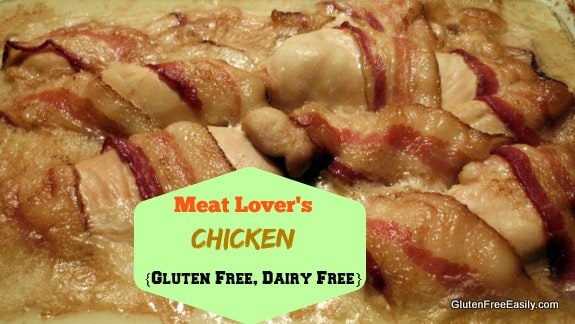 Meat Lover’s Chicken: That name might make you laugh because it’s a bit of a “dog puppy”—the term that my friends and I in the writing world used to use for redundancies—but it’s accurate. This chicken recipe, which I’ve previously heard called Continental Chicken or Special Baked Chicken, is my variation of a meat-centric recipe that we used to enjoy before I went gluten free. The recipe includes not only chicken breasts, but also dried beef and bacon. The bacon is wrapped around the chicken breasts and the dried beef is used as the base of the dish.

The original recipe called for a mixture of sour cream and cream of mushroom soup as topping for the bacon-wrapped chicken breasts halfway through baking. While there are some ready-made gluten-free products that can substituted for “cream of” soups and there are recipes for homemade “cream of” soups (mushrooms, celery, and more), the ready-made products often include a list of questionable ingredients and the homemade versions can take some time to assemble. (Note:  I do know that dried beef isn’t a prize when it comes to ingredients either, but eating it once every few years is okay by me.) So I thought I’d come up with a much simpler dairy-free alternative to use as “pour-over” topping. How simple? Only two ingredients. My solution was a mixture of coconut cream (that thick cream skimmed off the top of a can of full-fat—not lite—coconut milk) and chicken broth. 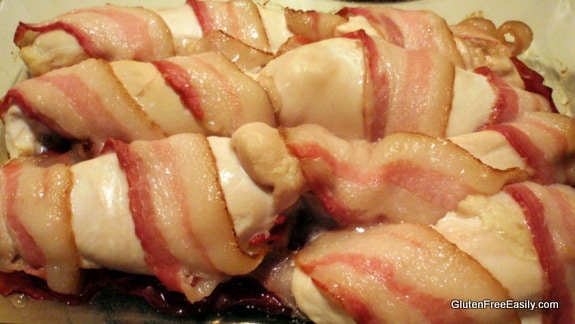 Halfway Through Baking … Before Adding Sauce

To be honest, the resulting dish was even better than I remember the original. Don’t you love that? Simple flavorful ingredients rule! I really never taste coconut flavor from coconut milk any more (desensitization from using coconut milk often perhaps?) and Mr. GFE didn’t note a coconut flavor, so this recipe *might* even pass muster for you folks who are not crazy about coconut flavor.

I’ve also made this same recipe in the slow cooker before. In that case, I use whole chicken breasts (because halved chicken breasts would cook too quickly and end up too dry) and usually about 1 1/2 slices of bacon per chicken breast although you can go crazy and use 2 slices per breast if you’d like. I also usually cook at least six chicken breasts as I find that a fuller slow cooker tends to yield a better meal. 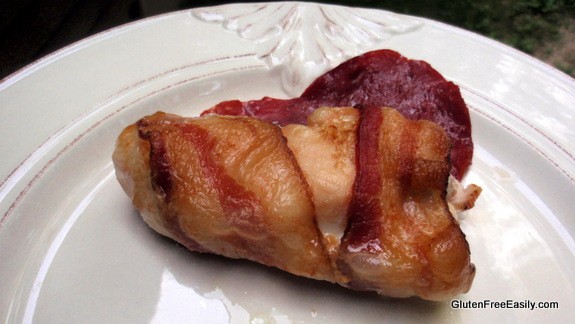 Meat Lover’s Chicken–Serve with Some Sauce Over Rice or Noodles, with Salad, or Veggies

Here are the two versions of my recipe below—the first is made in the oven and the second is made in your slow cooker. But before you leave gfe, be sure to check out my Library Clean-out Giveaway #1, which ends Wednesday. There are a total of 11 cookbooks and resource books in this giveaway and more to be given away soon!

I like a lot of sauce with this recipe, but you can reduce the amount of coconut cream and chicken broth to make less sauce if you like.

I like a lot of sauce with this recipe, but you can reduce the amount of coconut cream and chicken broth to make less sauce if you like.