I’ve been following the celiac listserv since I went gluten free. My doctor directed me to it as a helpful resource. The information shared was a bit overwhelming at the time (what isn’t when you first go gluten free, right?), but I found myself especially gravitating towards the personal stories. I also found some product recommendations and the recipes—always the gfe ones—like this gluten-free Chicken Enchilada Casserole, helpful. 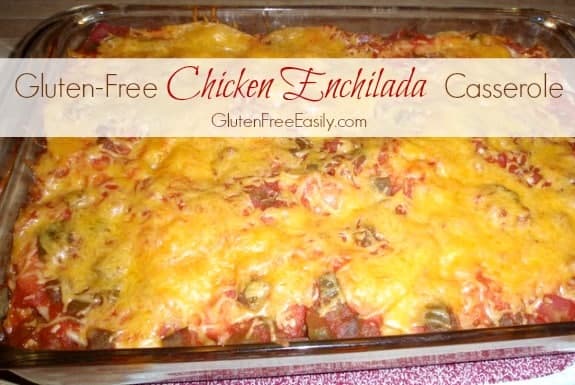 One member of the listserv who was always generous in all of those areas was a lady named Valerie. This Chicken Enchilada Casserole recipe I’m sharing today was adapted from a recipe that Valerie posted on the listserv. (She had adapted her version from one in Woman’s World magazine.)

But, first, let me tell you a little bit more about Valerie and some information that she shared that has stayed with me and is getting more press these days.

I don’t remember if Valerie had been diagnosed as celiac or non-celiac gluten sensitive, but she reacted to even the tiniest amount of gluten (something many of us can relate to). She was a grandmother and she found that after every visit by her toddler grandchildren, she would get ill. Somehow she had been “glutened” just by the shared hugs and kisses with her sweet grandchildren.

Valerie came to the conclusion that this occurrence was not surprising really as she would love on her grandchildren practically nonstop—as all good grandmas do. But her grandchildren always had crumbs on their bodies or clothes as all little ones do from eating tiny bits and pieces with their fingers or being messy with utensils.

So she started bathing her grandchildren as soon as they arrived at her house, and, of course, immediately thereafter dressing them in clean clothes.

Her approach worked! She never got glutened again in this manner and she was able to fully enjoy all of the visits from her grandchildren.

Valerie was also quick to respond when members queried about the psychological effects of gluten. Her son had suffered from a psychiatric disorder for years and she reported that currently he only demonstrated symptoms when he accidentally ingested gluten.

Even the tiniest amount would cause him to behave very bizarrely. It got so that his family and friends would immediately know if he’d eaten some gluten.

Most of us know that digestive symptoms get the most press by far when it comes to celiac and non-celiac gluten sensitivity. Yet, most of the folks who actually experience digestive issues as a result of a problem with gluten went years before they received a diagnosis and most remain undiagnosed today. Now, consider the folks with non-digestive symptoms, specifically in this case, neurological and psychiatric symptoms. While there are actually many non-digestive symptoms, this post will focus on just some of the “non-standard” symptoms of celiac—those addressed in a recent Living Without article. (Also, please remember that it’s estimated that about 40% of those with celiac disease experience no recognizable symptoms.)

Dr. Stefano Guandalini, the Medical Director of the University of Chicago Celiac Disease Center at the time of this post, responded to questions on the topic of neurological and psychological celiac symptoms in this article in Gluten Free & More (formerly Living Without). He shared the story of his 8-year old celiac patient who had been admitted to the hospital with hallucinations and profound depression.

Blood testing showed that her gluten anitibodies were extremely elevated. Further investigation showed that because the child had stopped experiencing digestive symptoms, her parents had been giving her cookies on the weekends. Re-education of the parents led to a truly gluten-free diet for the young girl and her symptoms disappeared.

Neurological issues related to gluten remain some of the most difficult cases to diagnose, largely because of lack of knowledge in the medical community. I doubt very seriously if many doctors, maybe that should be any doctors—other than the fictional Dr. Gregory House on the television medical drama, House—would consider celiac as a possible cause for hallucinations, profound depression, and severe anxiety.

I know many patients who have sought help for such conditions and have never been tested for celiac. In fact, celiac disease never even entered the picture.

Dr. Guandalini stated in the article I linked to above that patients can have idiopathic epilepsy (meaning epilepsy with no known cause), ataxia, peripheral neuropathy, recurrent headaches, and “autistic-like” behavior (e.g., sadness, failure to socialize, excessive irritability, anxiety) with no accompanying gastrointestinal symptoms.

In these cases, the gold standard for a celiac diagnosis simply cannot be applied. Dr. Guandalini states that a positive result on the anti-tissue transglutaminase (tTG) screening test alone is a diagnosis of celiac in such cases, because these patients will have few or no digestive symptoms, and they will show no damage to the small intestine.

I truly wonder how often a celiac diagnosis actually gets made under such circumstances. I think a diagnosis with such symptoms (and such lack of typical symptoms) would occur far, far less than a celiac diagnosis for someone who has digestive symptoms—and we know how under diagnosed even those cases are.

So, please spread the word on the neurological and psychological ramifications of celiac disease, so that individuals, their family members, and physicians will look at this other facet of celiac disease. Note that the symptoms shared here are not all-inclusive; these are simply the particular ones cited by Dr. Guandilini in the article to which I linked and several years later when I heard him speak at a conference.

He added that in the lab at his own center, early data is showing that changes do occur in the small intestine of gluten-sensitive patients. That is a huge finding in my opinion, and I look forward to additional research results being shared.

Valerie, the celiac listserv member who I mentioned earlier, was always so generous with her time and information. She and I even exchanged emails a few times.

Valerie hasn’t posted in a few years now. I find myself wondering what is going on with her and hoping she is well. I miss Valerie and I’m grateful for the recipes she shared, including this gluten-free Chicken Enchilada Casserole, which I’ve modified a bit.

Here are step-by-step photos so you can see how easy this recipe it to make and how delicious the resulting casserole is! 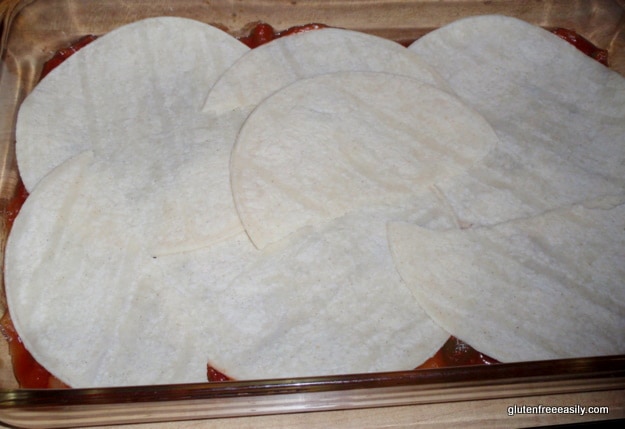 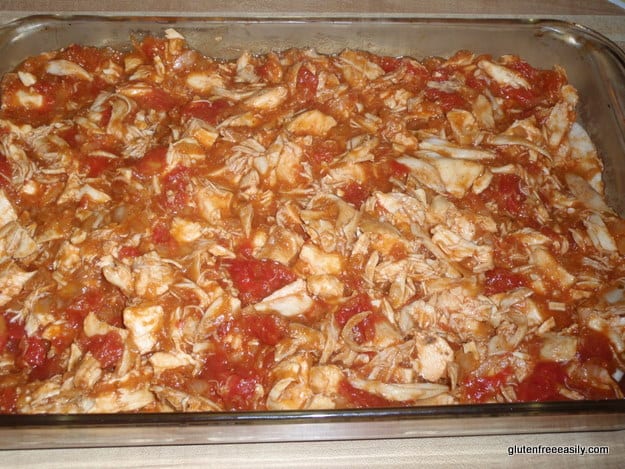 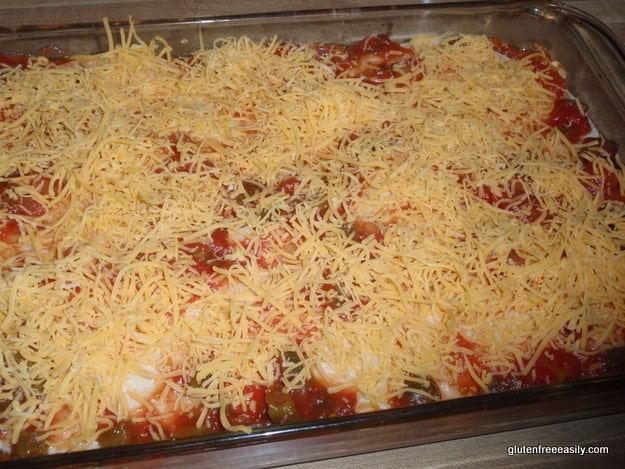 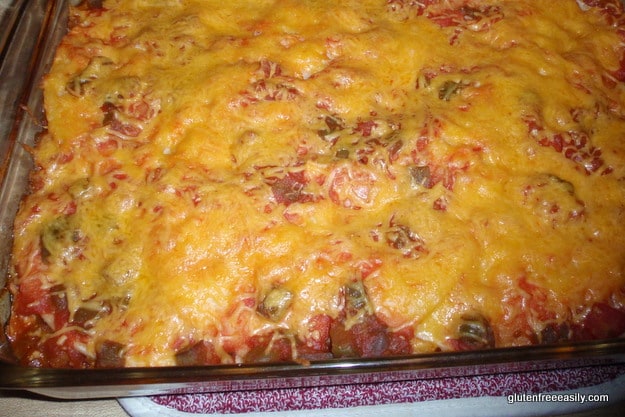 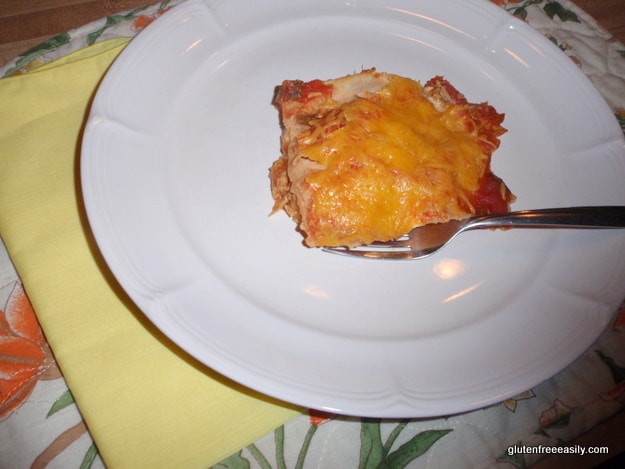 I usually use three boneless chicken breasts that I have cooked in my slow cooker in one cup of chicken broth made from bouillon. Slow-cooked chicken breasts shred easily. Leftover chicken or turkey (great way to use leftovers from my special turkey breast or any Thanksgiving turkey), gluten-free rotisserie chicken, etc., may also be used. Some readers have also substituted cooked ground beef.

Like most casseroles, this dish is one that is flexible. You can skip the tomato sauce and add a whole can of diced tomatoes versus just a cup. (You might have to cook the mixture “down” a bit more in the skillet if you do so.)

You can spice it up by using diced tomatoes with green chiles, adding more chili powder, adding chipotle powder, and so forth.

Some friends like making this dish using ground beef. Personally, I really prefer this dish with chicken or turkey, but feel free to experiment.

Eight ounces is not a huge amount of cheese for a casserole this size, but cheddar cheese often appears to be present in a greater amount than there actually is because of its rich color. That can be a good thing for the cheese fanatics. I often use more cheese for topping (than I do when sprinkling over the chicken mixture), just so I get that visual appeal.