This Classic Cucumber Salad is actually delicious all year long but it’s one of those recipes that you’d most likely associate with summer. And there’s nothing wrong with that. In fact, you’d be right. It’s so cooling and refreshing during the summer!

However, I’m in my usual mood for this time of year—mid-September to even late September—looking forward to all things fall but still trying to hold onto the best parts of summer. You know … steamed crabs, watermelon, fresh peach desserts, daylight. And today’s cucumber salad. This cucumber salad is definitely one of those best parts. 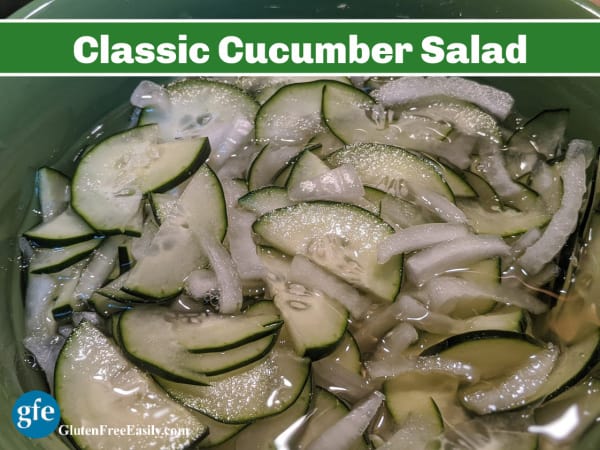 Classic Cucumber Salad is “old school” but it’s relatively new to me. With a few notable exceptions, I have not usually been big on vinegar-y recipes, pickled recipes, and the like. I know, I know. I have friends who are like, “What the heck is wrong with you, girl?!”

A few years ago, Mr. GFE and I visited a waterfront restaurant that we liked to frequent. One of the side dish choices for the day (recited, not on the menu) was cucumber salad. I asked our favorite server to describe it and when she finished, I said, “I want to try it!”

It was simply sliced cucumbers and onion crescents in a vinegary but sweetish marinade. Everything was crisp and tangy. It had a sweet and sour vibe, in fact, and I loved it!

Every time we returned to this restaurant, I asked for the cucumber salad. Sadly, it was never an option ever again and I’ve not returned to that restaurant this season.

From time to time, I would think about that amazing cucumber salad and consider how I could make my own version but then I’d forget about it. When we started getting cucumbers aplenty in our produce boxes, I decided I should get back on the trail of the best recipe for this cucumber salad. (FYI: Use affiliate code COOKWME-XD6MDE to get a discount on your first box if you want to try our favorite produce vendor, Misfits Market. I love that they use what they call “ugly” produce—which usually simply means produce that’s too small or too large to be accepted by grocery stores—and their prices are great in my opinion, especially for home delivery.)

It turns out that the classic recipe is one of those recipes that goes back decades, nobody knows who originally created it (all of our grandmas?), and it is simply one of “parts.” As in, one part x, one part y, and one part z. I love recipes like that because you can easily scale them up or down depending on how many you have to feed, future needs, etc.

There are many variations of cucumber salad but after some experimenting, I decided that’s the ratio that I liked. Specifically, one part water, one part granulated sugar, and one part vinegar. I’ve seen other recipes that use coconut sugar instead of white sugar and white vinegar instead of apple cider vinegar. 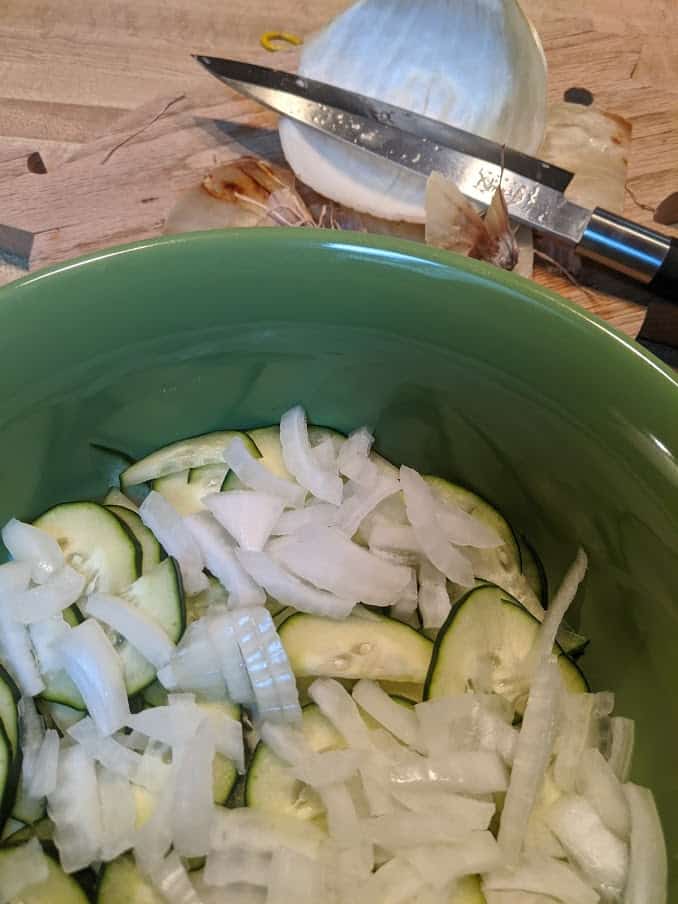 Feel free to do some experimenting and decide which variation you like best. However, I recommend you start with this version and then try other variations.

What did that old commercial say? Start with the best; stay with the best. I don’t remember what product that slogan was advertising but I definitely followed that advice with this recipe. 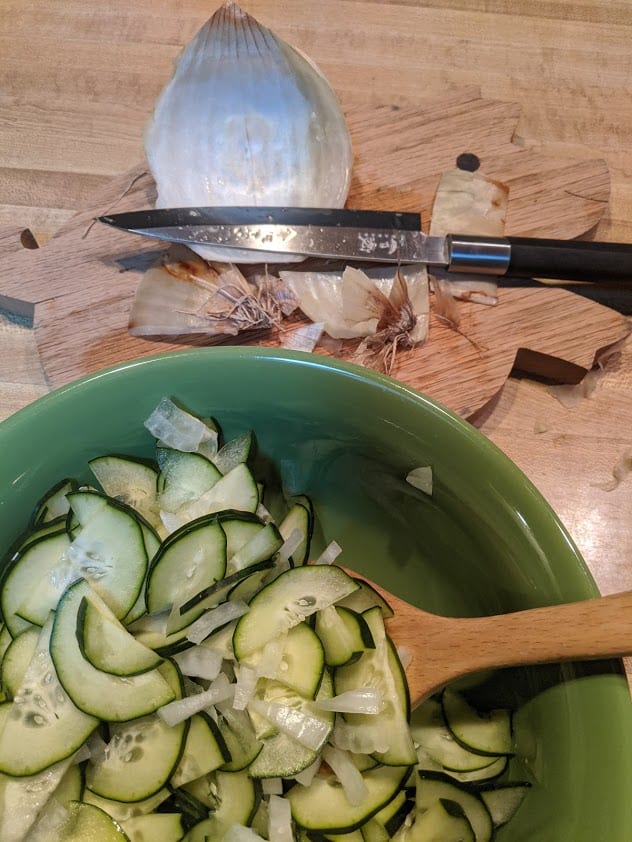 Note that this recipe is naturally gluten free. No special ingredients needed. Yes, distilled vinegar is gluten free (as is distilled alcohol).

Remember that focusing on naturally gluten-free ingredients, foods, and recipes is the focus of the gfe approach. It’s the easiest, least expensive, and healthiest way to live gluten free. Bonus … everything tastes the way it always did—not only to you but also to your family and friends. 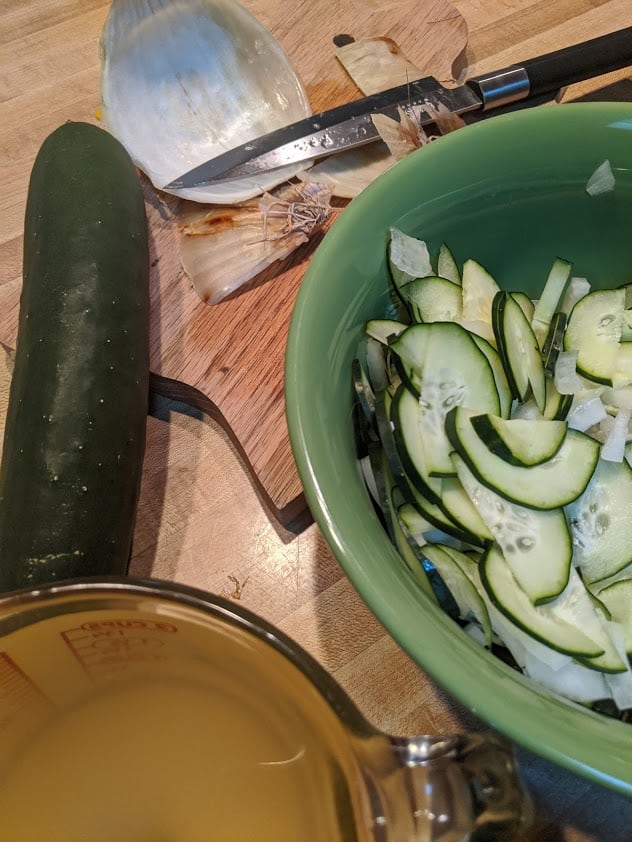 We’ve eaten this Classic Cucumber Salad as a side dish on its own almost every week since early summer. We also like using a “scoop” of this salad as topping on our green salads instead of dressing. Absolutely delicious! 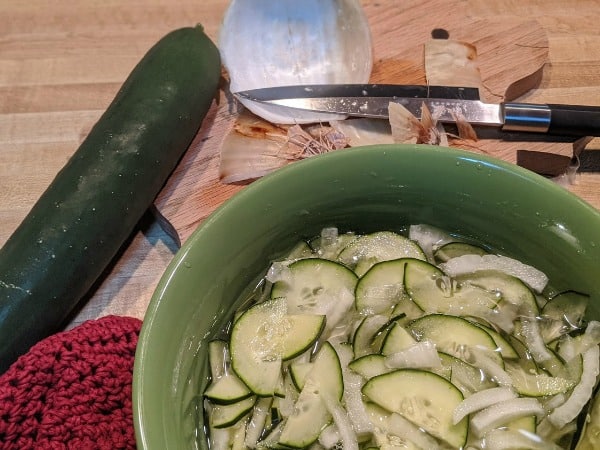 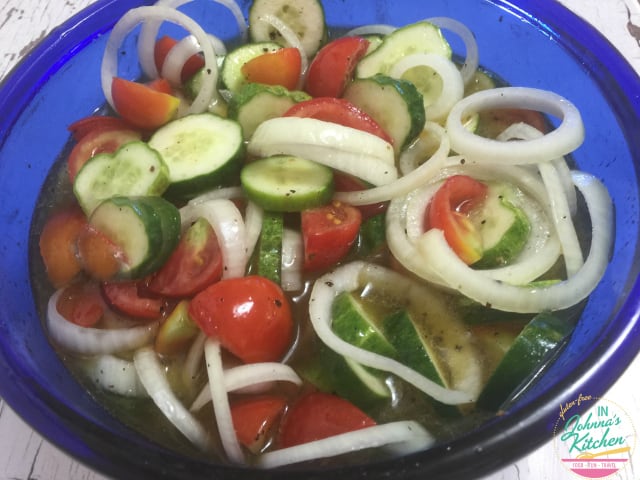 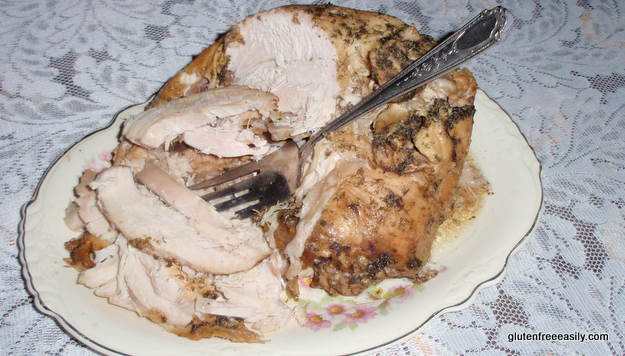 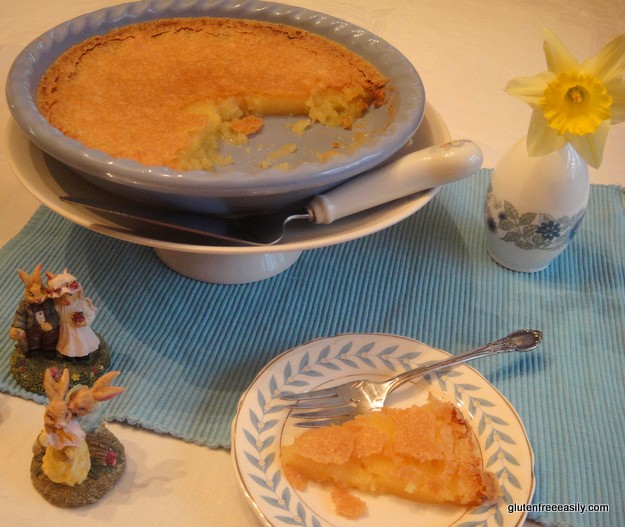 I’ll be back with more recipes, ones that you all would consider “fall-appropriate”; I promise! 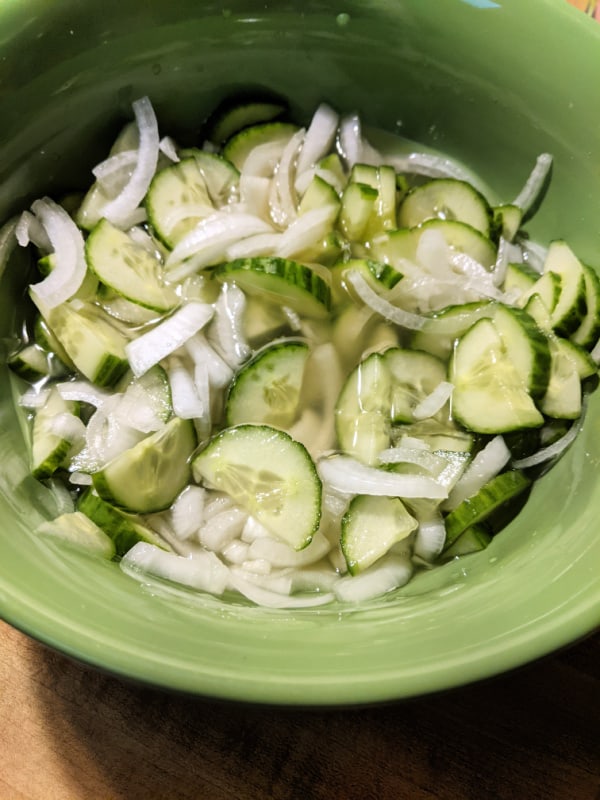 I don’t usually peel my cucumbers because I like the little bit of crunch that the peel usually offers but if I get a tough-skinned cucumber, I will peel them or I will remove half the peel in strips using my vegetable peeler. Taking that additional step not only makes eating the slices more enjoyable; it also creates very appealing “striped” slices.

This salad lasts for up to a week. It stays surprisingly crisp even when it doesn’t look quite as fresh and crisp.