Here’s my Painkiller drink recipe and my personal twist on the Bill Engvall comedy bit, Here’s Your Sign—a “laugh out loud” dig at folks who ask questions to which the answers are obvious, such as “did you break your leg?” directed to a person in a leg cast and on crutches.

Those of you who are faithful readers of gfe know that I’m not into whining—well not much or not too often anyway. I love sharing information with folks on the gluten-free diet … but occasionally, you’ll get a person asking the questions and you don’t think they have a genuine interest. Or you get someone who will ask you the same questions over and over again with no intention of remembering what you’ve said. In fact, some have already moved on to other completely unrelated thoughts by the time you answer. 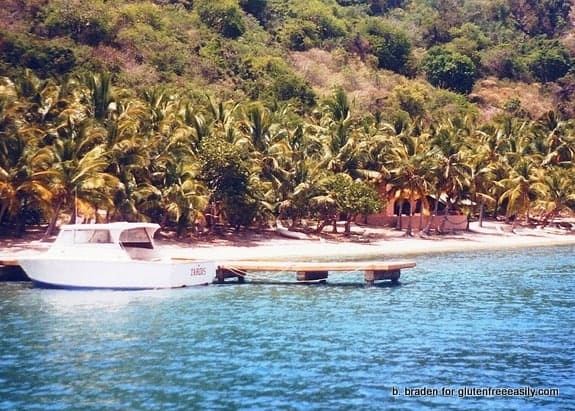 When I was a teacher before my husband and I were married, his roommate would ask me about once every other week what grade I taught. Seriously. It wasn’t like I changed grades every year or anything like that. I taught third grade the whole time I was a teacher. I wanted the answer to flash on my forehead in neon lights when I thought it, so I wouldn’t have to answer him yet again. Although I guess that solution of my thoughts flashing on my forehead would have had obvious drawbacks!

When I was pregnant with Son, people could never remember my due date even though it was Christmas Eve. How hard was that to remember? A maternity top with the due date would have been nice, or maybe with the more recent showing off of the baby bump, I could have worn tight-fitting tops with 12-24 stamped on all of them—perhaps over an image of a Christmas present perhaps or a bambino in Christmas attire. Hey, “due date apparel” might be my million-dollar idea! But I digress.

Oh, we all forget what folks have told us before and repeat our questions to them sometimes, but with some folks, the questioning can become more than a bit tedious and you don’t always want to answer. Or, you’re perfectly fine with the conversation, but want to skip the basics and get to the core stuff. There’s really a lot that can be said about celiac/gluten intolerance/gluten sensitivity and the gluten-free diet, so when a person wants to know more, why waste time on the preliminaries?

There used to be a beach bar on Cooper Island in the British Virgin Islands (BVIs) that had this “let’s not waste time with chit-chat” type of philosophy. We would always stop there when we sailed between the islands. My husband is a scuba diver and Cooper Island was one of the few places in the BVIs you could get scuba tanks filled at the time.

We’d slide off the dinghy into knee-high water and then walk the few steps across the sand once we reached the beach to get to the bar. And “bar” is a very loose term. It was really nothing more than an open-air stand with a canvas top, a big ice chest, a few of those large cylindrical Igloo cooler dispensers, and bottles to supply those dispensers if necessary.  There were four seats (something of the plastic outdoor chair variety, if I recall).

The Cooper Island Beach Resort bar was staffed by the couple who ran it and their large dog. Note that resort was also a generous term as, at the time, it was powered by a generator which was turned on for only a few hours a day. And the owner of the resort walked around the property wearing a hard hat at all times. The story was that he’d been hit on the head by a falling coconut from one of his own trees and had suffered a skull fracture years earlier. He wasn’t taking any chances on the same thing happening again, but I digress.

The couple who ran the bar pretty much only served one drink—but it was the only drink that one required and usually only one single serving of said drink—a Painkiller. The drink fits its name, believe me. History (via the web) says that the Painkiller—what is now the BVI’s signature drink—was created by George and Marie Myrick at the six-seat Soggy Dollar Bar on the island of Jost Van Dyke in 1971. The recipe originally included equal amounts of gold Virgin Islands rum and Barbados rum. However, the rum used in the drink recipe was later changed “officially” to only Pusser’s Navy Rum and Pusser’s considers the Painkiller its signature drink. Sometimes known as the “Pusser’s Painkiller” (there’s marketing everywhere, and the alliteration is nice!) and there are several variations, here’s the recipe I use most often (a variation of Cooper Island Beach Resort’s Painkiller). 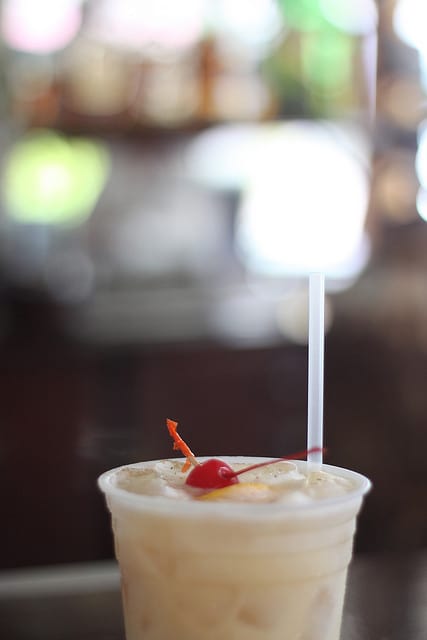 Back to “the sign” … A bright pink poster was tacked below the counter area of the Cooper Island Beach Resort bar, in the area where one would order drinks. On it, the owners had posted all the answers to the repeated questions they faced to avoid those often tedious and sometimes annoying preamble conversations.

Don’t get me wrong, these folks were very nice and friendly people, but they just thought the basics could be avoided with the help of their sign and their approach actually worked very well. Plus, the sign amused people greatly. I mean it was really a brilliant idea. We still chuckle over it when we talk about our BVI trips. Their sign read:

Without a single word (more time for the serving of Painkillers!), the couple conveyed where they were from, how long they’d been running the bar, the breed of their dog, the ingredients in a Painkiller, and the bar’s hours of operation.

Sadly, the Cooper Island Beach Resort bar became a true resort style bar back in 2009, but the charm of the original beach bar is fixed in our memories and certainly, the lesson of the sign remains. Now if I had a sign to save the small talk on being gfe (after I explained what gluten was to those who asked), my answers would read:

I’m sure you’ve figured out the questions I was answering:

What would the answers on your sign be? Do you willingly share info that you are gluten intolerant/or have celiac disease with the hope that it will ensure you get safer food, that you might help others recognize they have gluten issues, etc.? Or do you only divulge this information if absolutely necessary? And finally, do you tweak your answers dependent on the interest of the person asking (e.g., the repeated “querier”), the social situation you’re in, etc.? Please tell us in the comments.

~ A Place at the Table–for Thanksgiving and Any Time

~ Grieving Gluten (and Everything That Goes With It)

~ They Just Don’t Understand, Part 1 of 2 (be sure to read both parts)

And now, here’s that Painkiller Drink recipe for you! Bottoms up!