National Cinnamon Raisin Bread occurs every year on September 16. But you can still celebrate this day or enjoy gluten-free cinnamon raisin bread any day even when you eat gluten free when you have these wonderful recipes.

Fall is upon us and Autumn is most definitely the kickoff for comfort food recipes. Freshly baked gluten-free Cinnamon Bread is a very fine comfort food indeed! 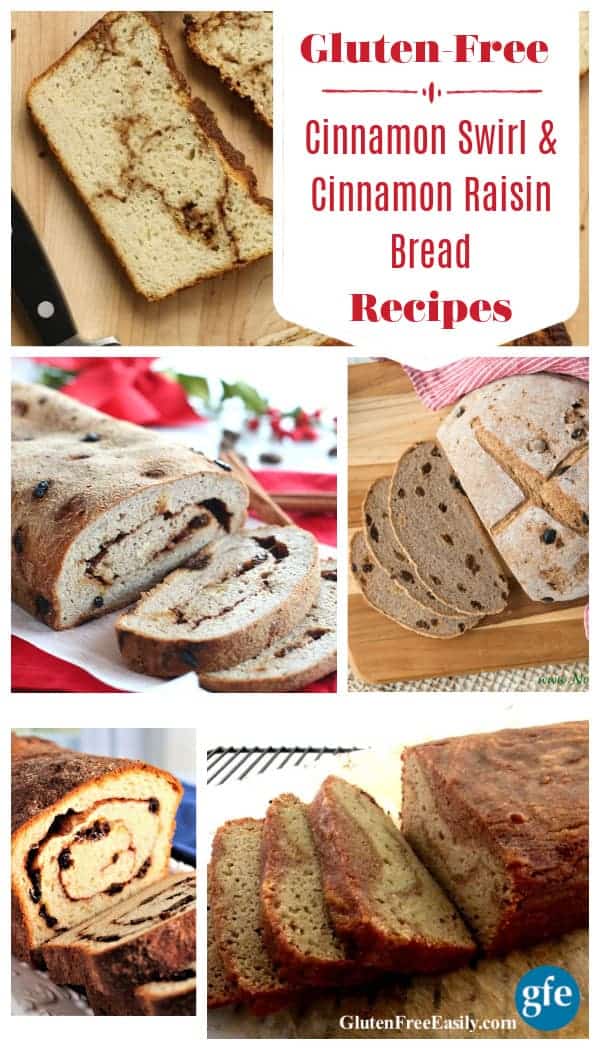 Baking excellent bread is always a pleasure but especially so during cooler weather. That fresh bread right out of the oven tends to warm one in multiple ways.

As always, I’ve labeled the recipes as “gluten free,” “dairy free,” and what I like to call “more-free” (e.g., yeast free, egg free, paleo) so you can quickly see which recipes will work for you and your family. Note that several of these recipes were previously shared in 65 Best Gluten-Free Bread Recipes (Gorgeous Loaves), which is part of my ongoing Bountiful Bread Basket series. (All photos are reprinted with permission of the individual authors/photographers.)

Slowly but surely, I am breaking these posts up into smaller posts to make them more palatable, more user-friendly, if you will. Placing all the gluten-free cinnamon bread recipes in this single post/article is another step forward in that effort. Don’t worry though, if you have the original posts bookmarked and go back to them out of habit looking for a specific recipe, if that recipe has been moved, you’ll still find a link to the bread recipe(s) you love!

Here’s a handy listing of all the Bountiful Bread Basket posts to date:

~ Part 2a:  The Best Gluten-Free Rolls

~ Part 2b: The Best Gluten-Free Biscuits

~ Part 3: Top 20 Gluten-Free Bread Recipes Made in a Bread Machine, Plus More Info and Tips on Bread Machines

~ Part 8b: The Best Gluten-Free French Bread Recipes (including Baguettes)

Reader reviews: “We LOVE this bread recipe! Your bread recipes are the best. It is hard to come by good gluten-free breads that don’t use any gums.” and “I got your recipe and tried it and it is FABULOUS!!!!! We tried it immediately and fell in love with it! We tried it the next day without the Cinnamon and raisin and it was great! Used crumbled pecans instead of raisins and it was also great!!! THANK YOU from the bottom of my heart.” 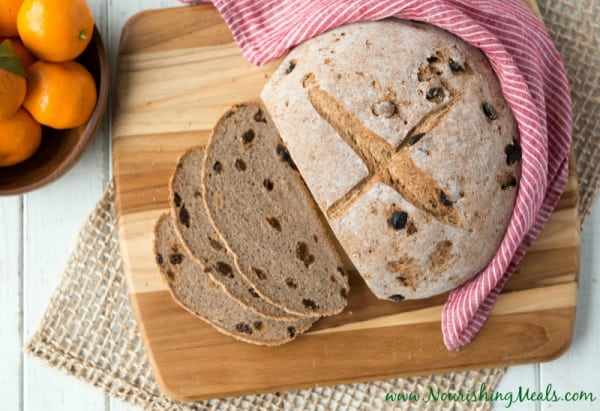 Reader reviews: “I made this bread for my 16-month-old son and he loves it! I spread either almond butter or peanut butter on it for him and he gobbles it up.” and “Loved this bread!! My 7-year-old son adored it too!! It was super simple to make and didn’t have complicated ingredients.” and “Just made it I added 1/4 cup of raisins to the dry ingredients … delicious, great texture.” 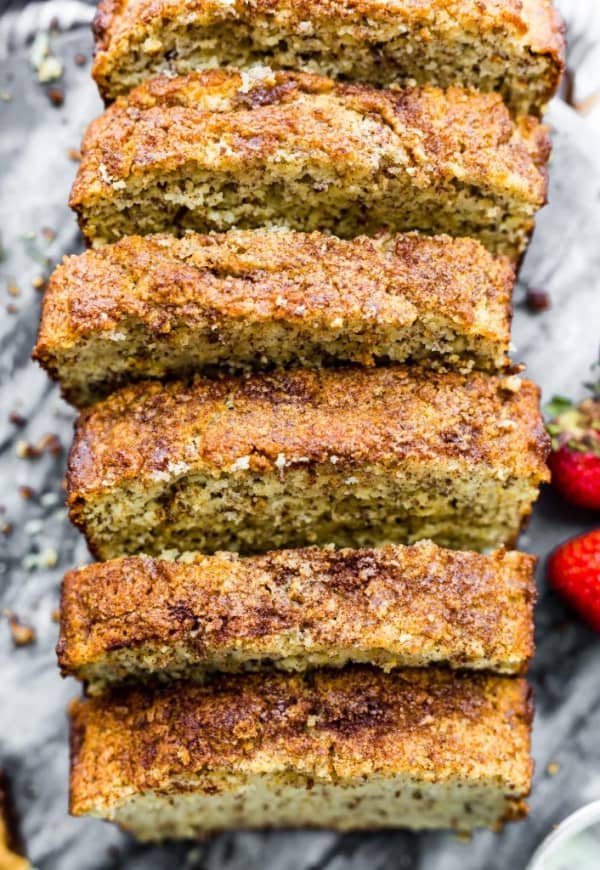 Camilla says: “This bread isn’t just good. It is amazing (if I do say so myself). It’s super-simple to make (one bowl, no hand mixers, & a short list of ingredients), and though it is low in sugar, it is great for dessert as well as for breakfasts and snacks.” 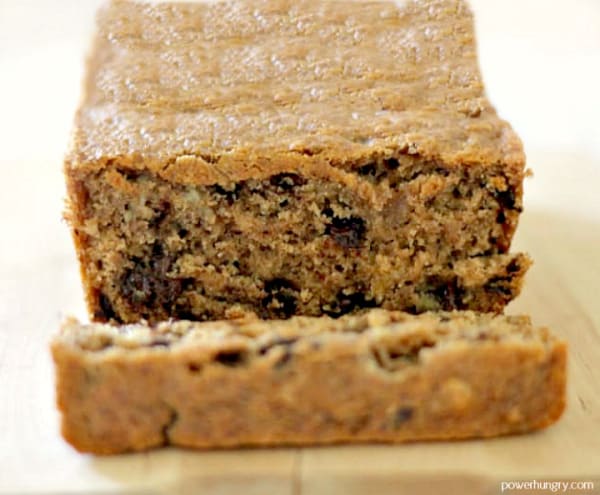 Reader reviews: “Just ate a piece of your raisin bread. It was wonderful. I used a flour blend that I’ve mixed for years and I had to add a little extra flour in order for my bread to look like the pictures you posted showing how the dough should look. I also added a little more cinnamon and sugar. Thanks for the recipe. It does take a little time to reach the final product, but the wait is well worth it.” 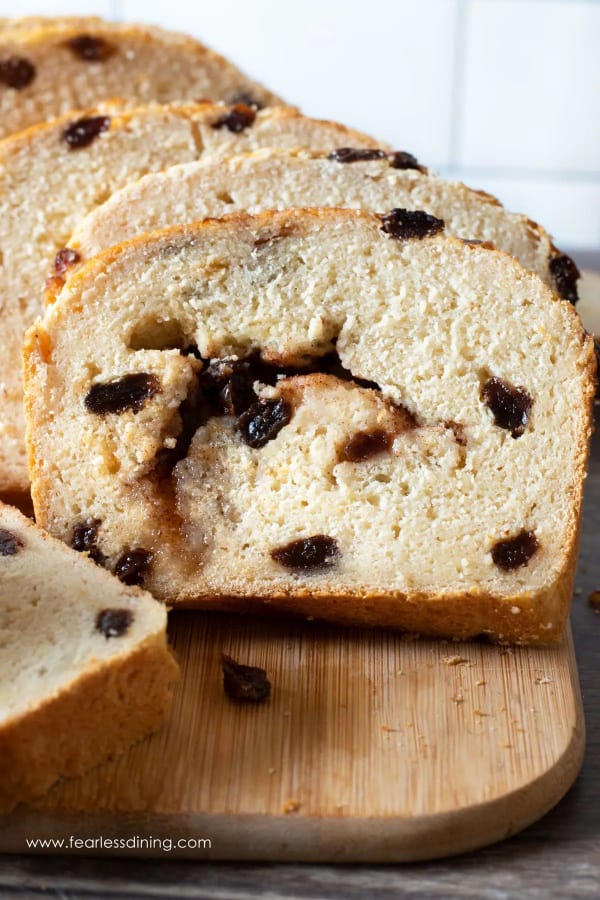 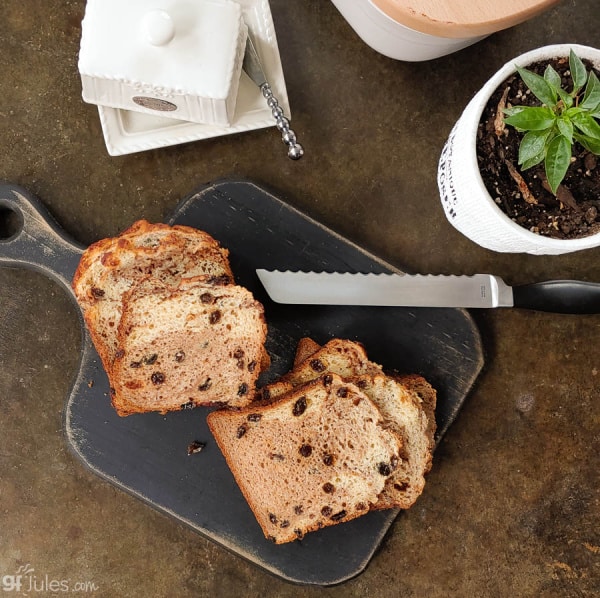 Jules also tells you how to make this bread in a bread machine (see photo below) if you prefer.

Reader reviews: “Made it today, my first time baking EVER! I used Angry Orchard Unfiltered Cider for my fizzy liquid and I messed up on a couple of things: 1) I put the Craisins in with the wet ingredients and 2) I forgot to do the knife thing with the sugar/cinnamon stuff but neither seemed to matter, it came out freakin delicious!!” and “Yummy. I have made it twice now, both times in the bread machine, and it turned out beautifully. I add Craisins rather than raisins just because it is what we have.” 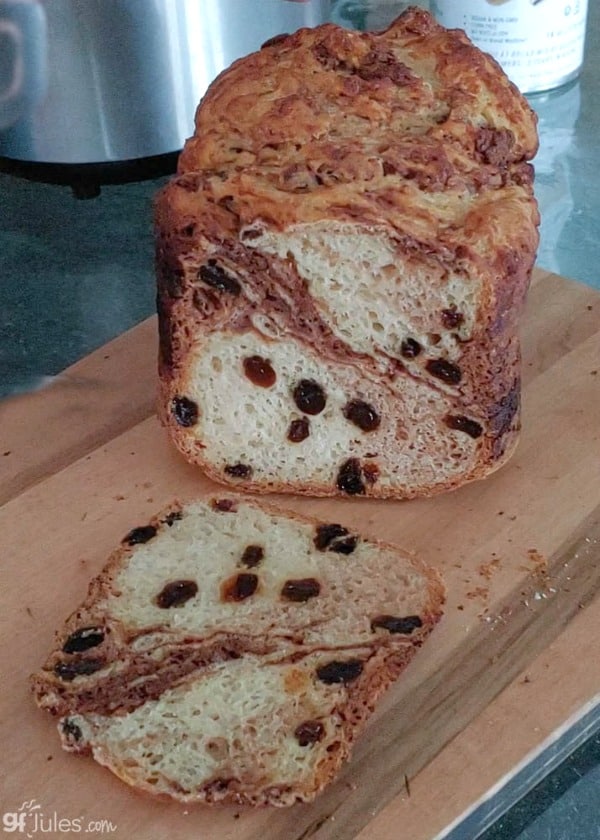 Reader reviews: “We made this for school breakfast a couple weeks ago and it is so good!” and “I just made this right now and it turned so moist and yummy! I’ve missed raisin bread for such a long time but not anymore! This is definitely going to be a staple in our house. The only alteration I made was that I added some cinnamon. Thank you for an amazing recipe!” and “I finally made this today – added in just a few TB coconut sugar, just in case, and my goodness, it’s my new favorite thing!!!! Honestly, it has a great texture, great taste. I love it!!!!! It’s going to be a staple in my house! THANK YOU for this recipe!!!!!” 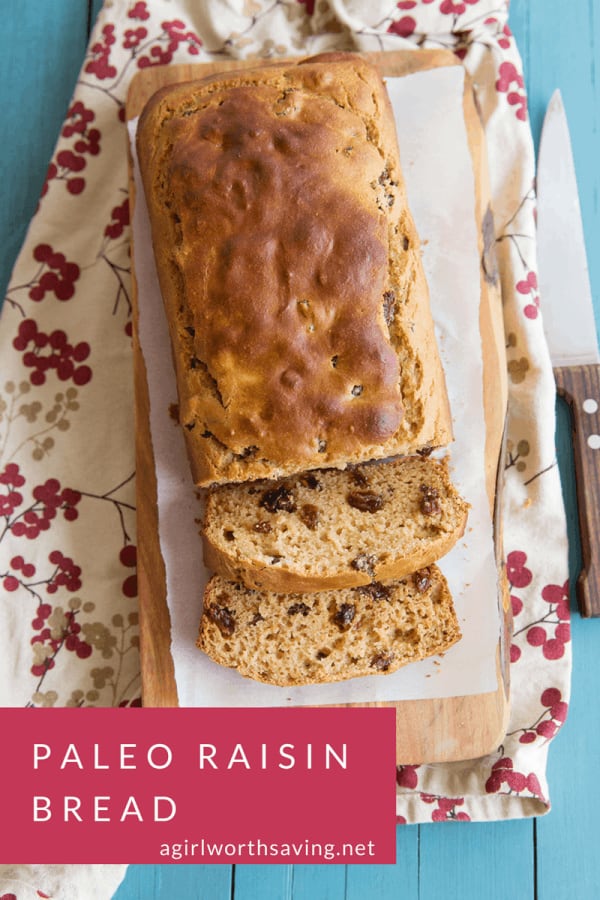 ~ Cinnamon Raisin Bread from The Gluten and Dairy-Free Bakehouse (note that this website is no longer active so I have shared the link from the Wayback Machine internet archive) ~ gluten free, dairy free, vegetarian 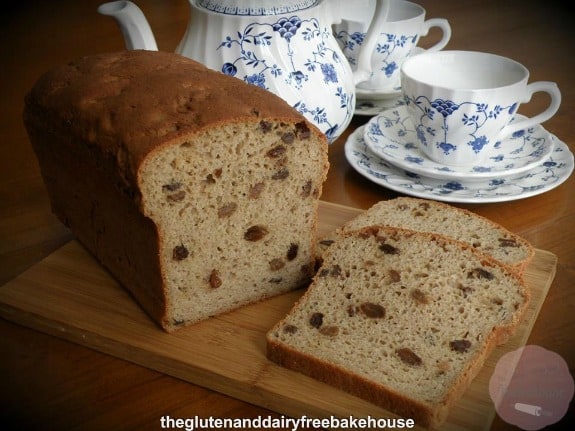 Gluten-Free, Dairy-Free Cinnamon Bread from The Gluten- and Dairy-Free Bakehouse

This recipe from Nancy especially pleases me because she adapted it from my gfe Paleo Bread recipe! 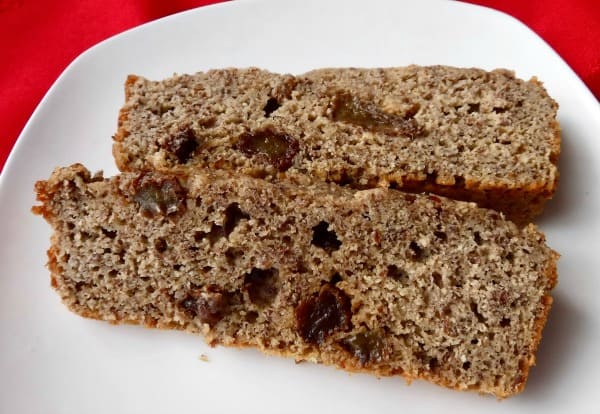 Reader review: “This was seriously amazing! Worth all the effort to get the special flours and all the time to proof, rest, and proof again! such a great texture and chew. We couldn’t wait to cut into it and had a slice when it was still warm … heaven.” 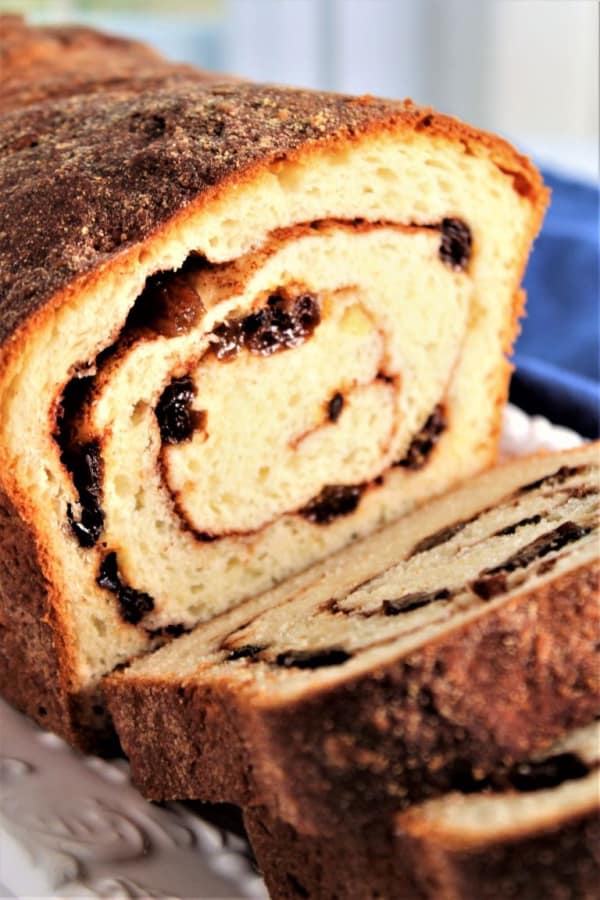 This recipe is made using Pamela’s Bread Mix.

Reader review: “I will be making this delicious bread again and again with fun variations, like subbing sugar-free chocolate chips for the raisins! I also need to practice rolling this dough. I found it easier to handle the dough when I dipped my fingers in cold water rather than oiling them. Next time I will use very little oil on my parchment paper to prevent my dough from sliding around too much. This bread has kept very well in a zipper plastic bag on the counter, and I’m down to the heels. Great recipe!” 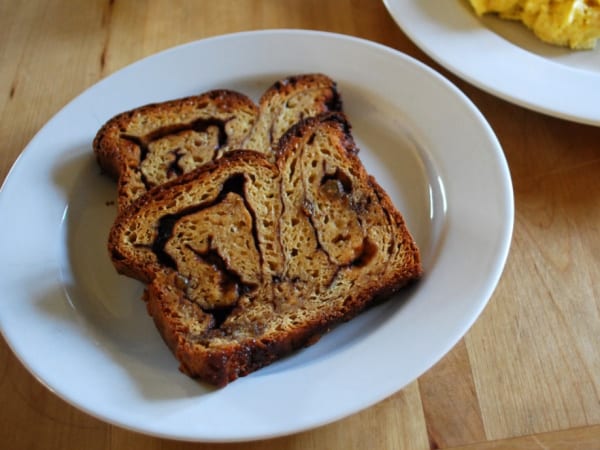 Silvana says: “I’ve tasted dozens of gluten-free breads from bakeries around the country that friends and colleagues have recommended. The bread looks good in pictures and I can’t wait to bite into them. Then, I reach into the bag and I can already feel the disappointment—they’re heavy. They break, not bend. And the flavor? It’s just okay. I’ve come a long way with this Cinnamon-Raisin Bread. I’m bringing bend back!” 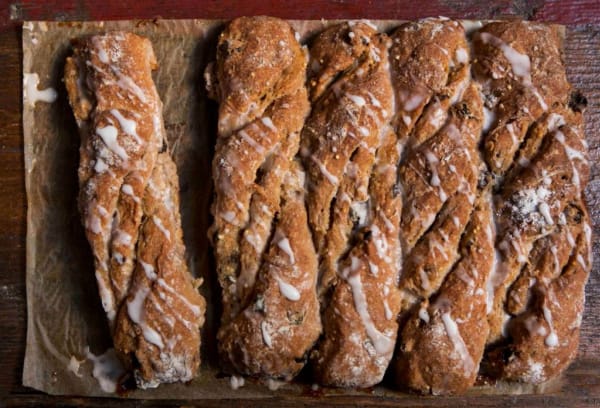 Chelsea said she wanted “to make a mildly-sweet-perfect-for-breakfast-not-hard-as-a-rock-or-crumbly vegan and gluten-free Cinnamon Raisin Bread.” And she thinks you will be pleased. She loves her Cinnamon-Raisin Bread served with peanut butter as you can see.

Reader review: “It turned out great … It smelled and tasted delicious, and the loaf was gone within the day (devoured by non-vegan / non-gluten-free family members)!” 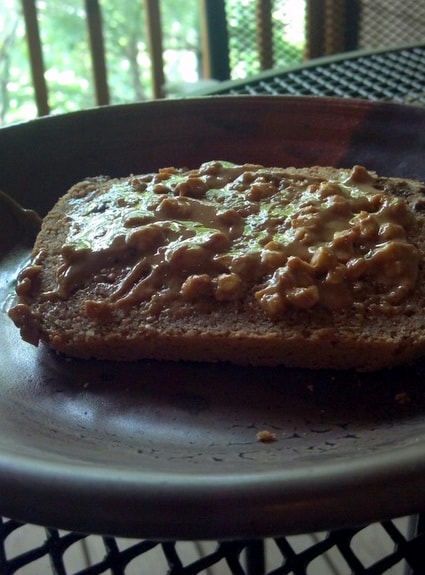 Reader reviews: “Love this recipe! We’ve made it so many times and just discovered it freezes well, too!” This reader shared that she baked the dough in a doughnut pan to make Cinnamon Raisin Bagels: “They turned out to be delicious!” and “so happy I found this recipe. I made it today and it is fantastic! Will be making this again soon. Thanks for sharing!” 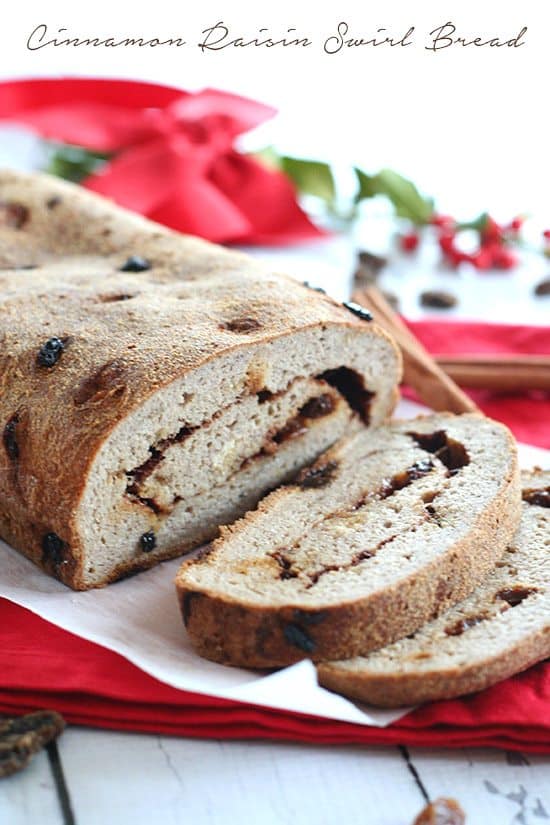 Starlene describes this bread: “Slightly sweet with just a hint of cinnamon. Delicious with nut better and fruit preserves, slathered with butter or best yet a mixture of butter, honey and cinnamon.” 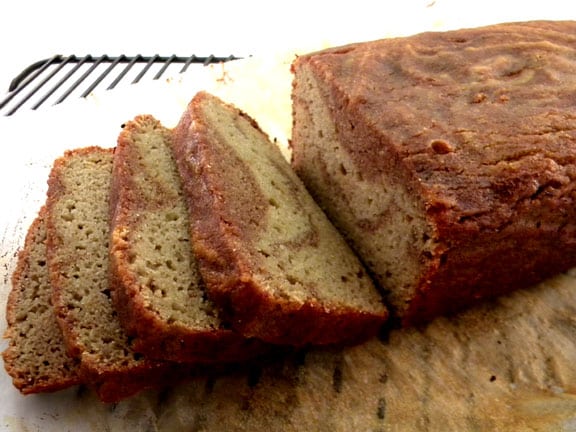 Reader reviews: “Made this yesterday, using your flour as always, for 3 of us and it’s almost gone! Absolutely delish and easy to make.” and “This recipe is wonderful and so easy to make.” and “Amazingly yummy! Everyone loved it and the loaf I just made is gone! I used almond milk instead of coconut milk.” 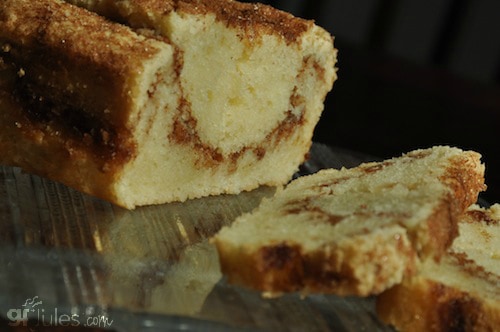 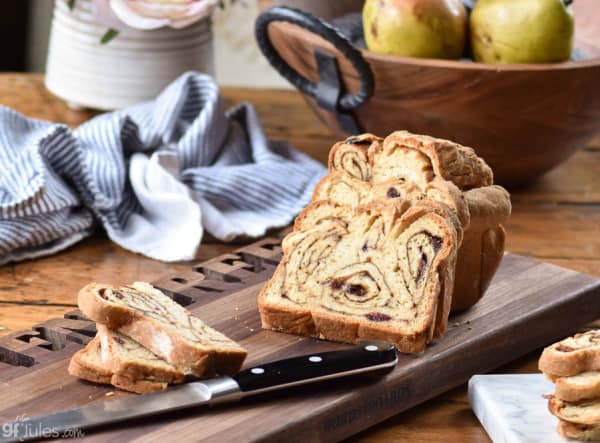 This recipe reminds me a lot of Friendship Bread—without the yeast and bonus, with this recipe there is no need for a starter.

Reader reviews: “Just made this last night, and it’s awesome! So moist, and you can’t tell it’s GF! I’ll be using this recipe often. I was worried about using rice milk instead of coconut milk, but worked out fine. I also had to substitute the brown sugar with coconut sugar, because my husband can’t have the brown sugar. It has a flavor similar to brown. Thanks for posting this, we really enjoyed it!” and “We made your coffee cake CHRISTMAS morning … it was DELICIOUS and we were talking about how we need to make it AGAIN SOON! THANK YOU!” 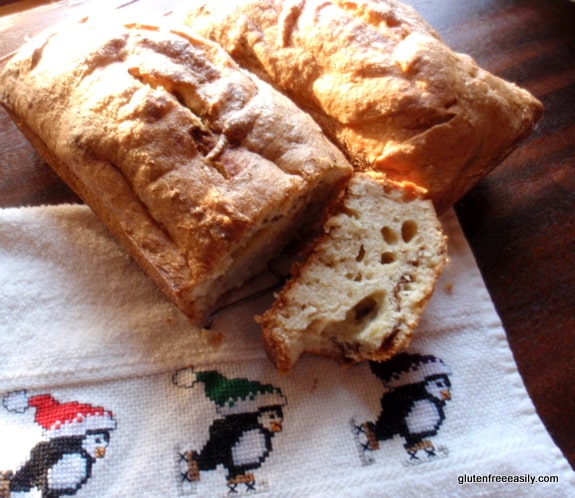 Pete and Kelli debated on whether to make Cinnamon Raisin Bread or Cinnamon Swirl Bread. Kelli prevailed—with the latter option. Pete said: “We’ve gone for a straightforward cinnamon bread, and the result is a moist yeast bread packed with cinnamon sugar goodness.”

Reader reviews: “I made this recipe last night and it is delicious!” 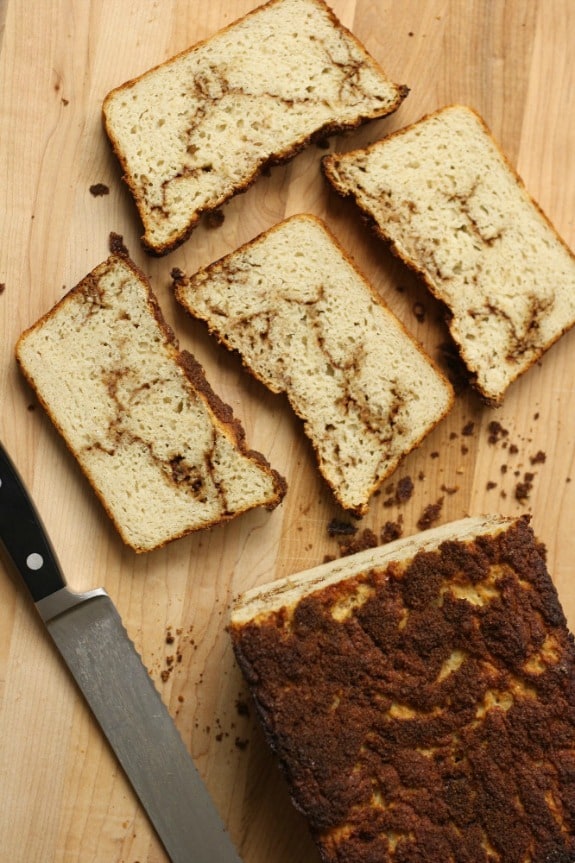 Gluten-Free Cinnamon Swirl Bread from No Gluten No Problem

Reader reviews: “We made this for Easter breakfast. It was delicious!! Tasted like cinnamon rolls!” and “I made this for the second time yesterday! It is so yummy and the texture is perfect.” and “This cinnamon bread is delicious!! I made it this weekend for the first time when one of my teenage daughters had a friend sleeping over. The kids practically ate the entire loaf. It was that good.” 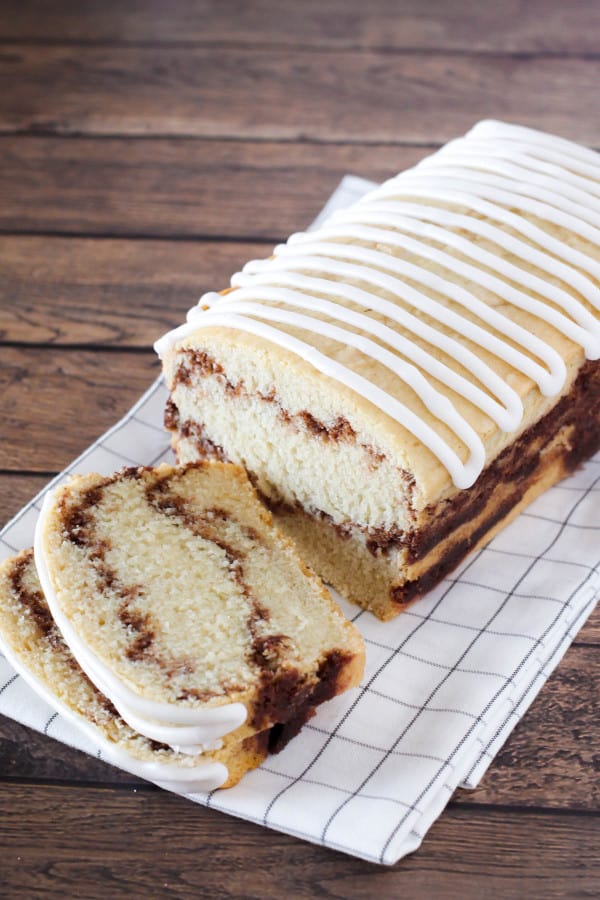 Reader reviews: “Today is my first day of gluten free baking and I tried this recipe with great success. My husband said it was quite good, a little heavy compared to fluffy breads that he’s used to but he ate it all without putting it down! I loved it!” 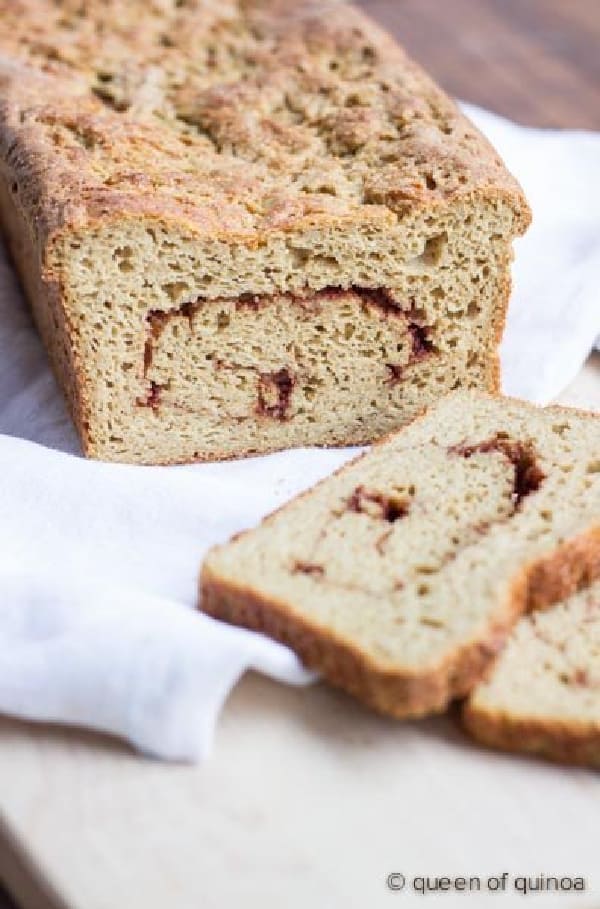 Reader reviews: “This bread is soooo good. We ate half straight out of the oven. Then made french toast. It was great. I think I’ll try some walnuts next time.” and “Wow! Amazing bread! Small crumb, good crust and a squishy elastic center.” 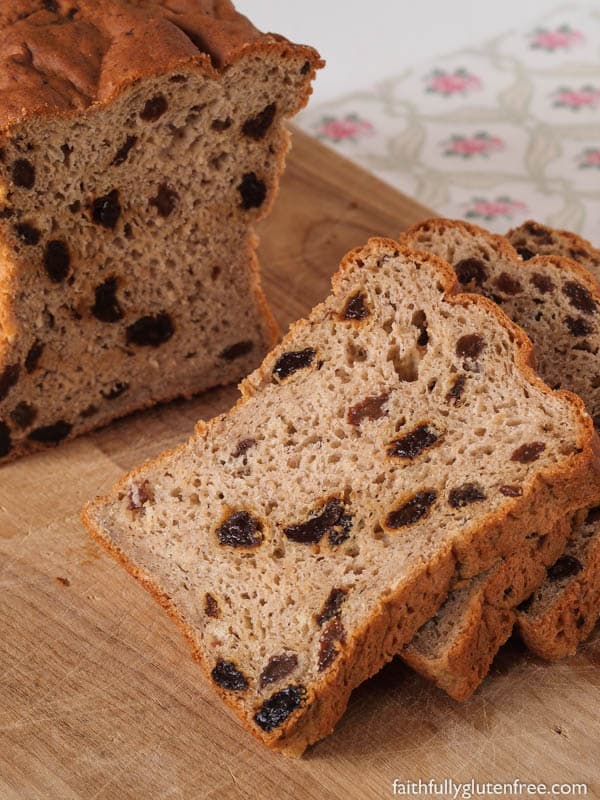 Stephanie “saved” a less-than-impressive store-bought loaf of gluten-free cinnamon raisin bread by turning it into delicious bread pudding. Feel free to use whichever loaf you prefer—homemade or ready-made. 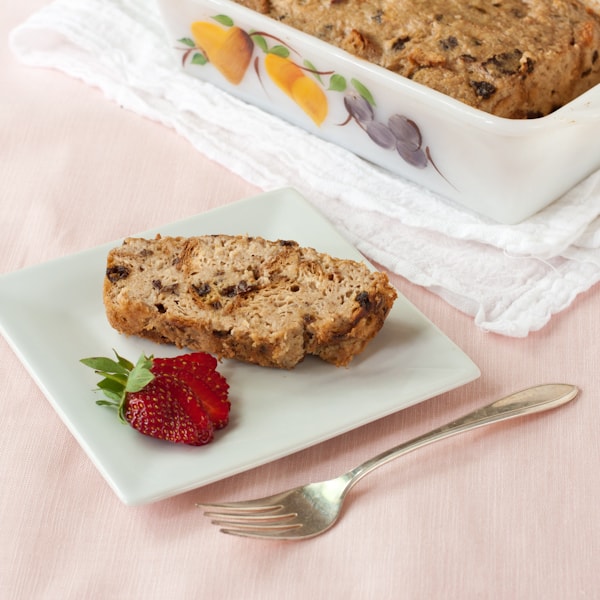 This recipe was created by Allyson Carter for the So Delicious recipe contest and shared on the Go Dairy Free site. Allyson says: “Technically, you could use any almost any bread to make this casserole, but cinnamon raisin makes it a real treat.” It’s the perfect recipe to use on a lazy Sunday, a special brunch, or even a holiday morning—such as Christmas or Easter. 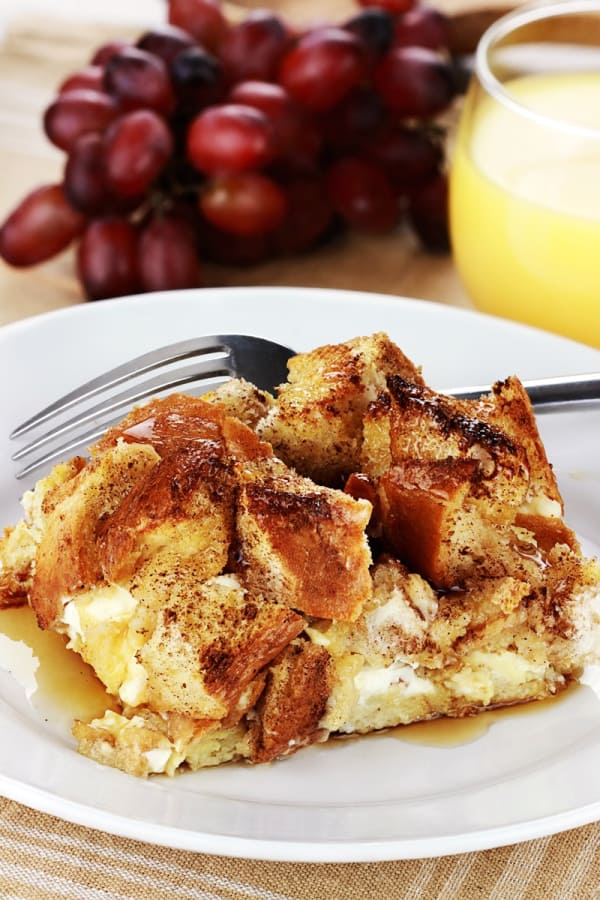 Audrey says: “Ok, so I know these look a little silly, and funny, and odd, and quirky, and… you tell me… But these little muffin-shaped clusters of cinnamon raisin syrupy bready goodness tasted too awesome not to share.” 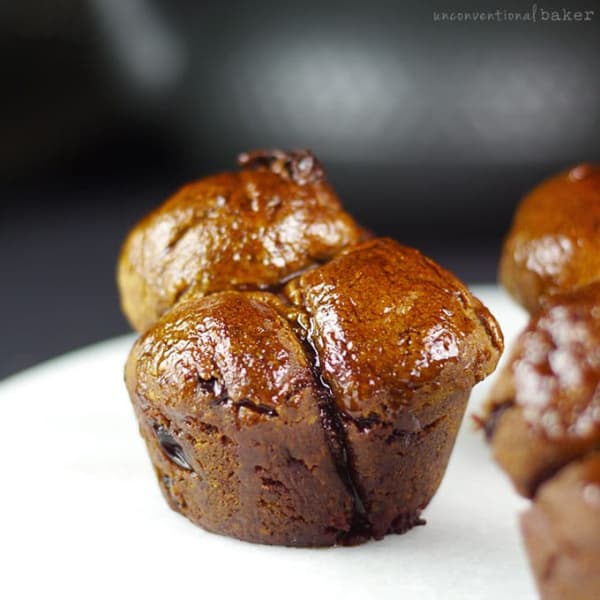 Michelle said: “These are so easy and so yummy! My boys ate these right up on the day I made them as an after school “snack” and didn’t add anything to them. My hubby forgot to eat his, so he had his two days later, and found adding a little butter and maple syrup made it perfect!” She uses a ready-made gluten-free Cinnamon Raisin Bread in her casseroles but you should be able to use any homemade gluten-free Cinnamon Raisin Bread shared in this recipe collection if you prefer. 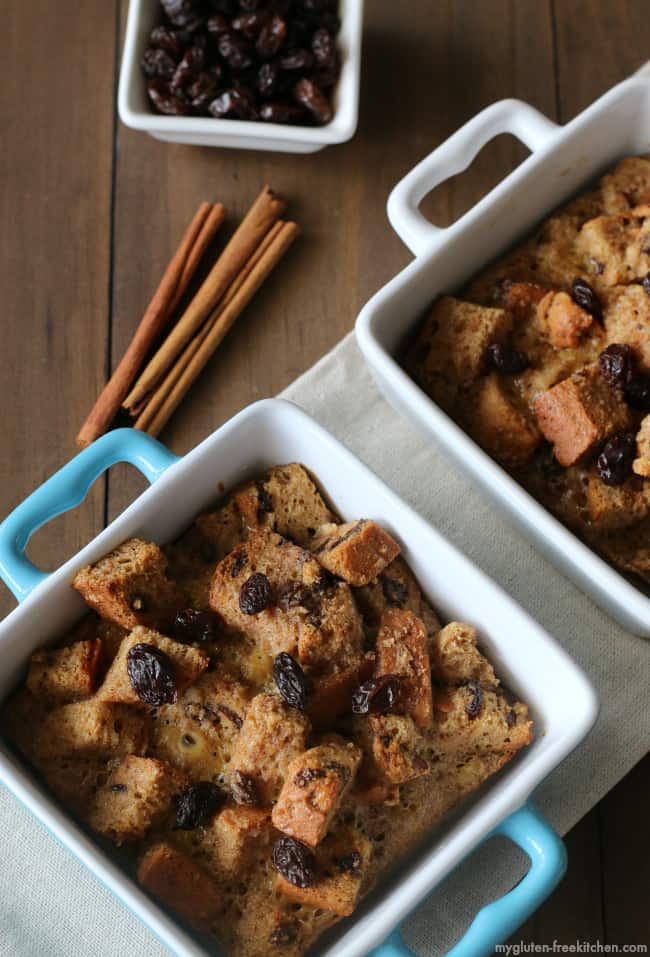 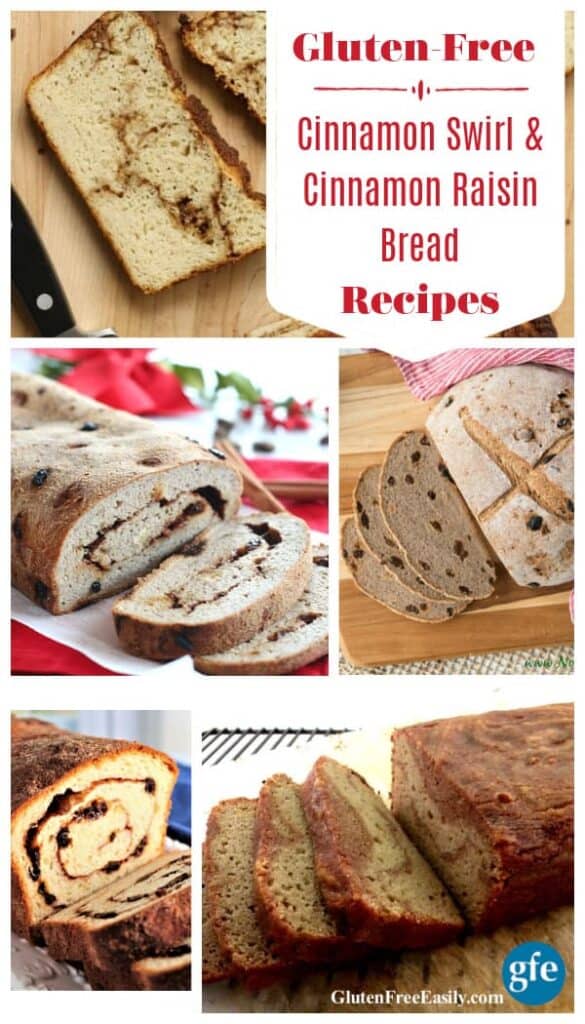